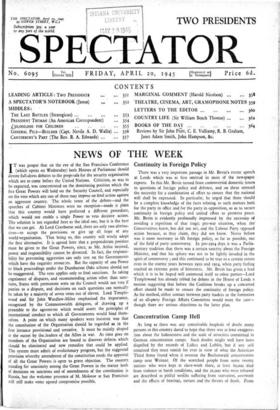 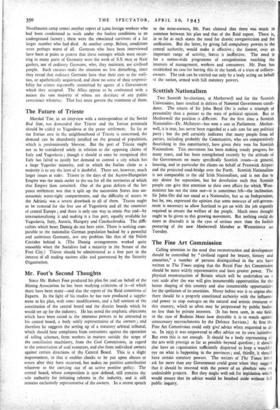 As long as there was any conceivable loophole of doubt many persons in this country dared to hope that there was at least exaggera- tion about the hideousness and the scale of atrocities committed in German concentration camps. Such doubts might well have been dispelled by the records of Lidice and Lublin, but if any still remained they must vanish for ever in view of what the American Third Army found when it overran the Buchenwald concentration camp near Weimar. Of the wretched people from some twenty nations who were kept at slave-work there, at least 6o,000 died from violence or harsh conditions, and the 21,000 who were released arc described as pitiful wrecks suffering from starvation, overwork and the effects of beatings, torture and the threats of death. From Nordhausen camp comes another report of 2,000 foreign workers who had been condemned to work under the foulest conditions in an underground factory ; these were the emaciated survivors of a far larger number who had died. At another camp, l3elsen; conditions were perhaps worst of all. Germans who have been interviewed have been at pains to protest that these outrages which were occur- ring in many parts of 'Germany were the work of S.S. men or Nazi gaolers, not of ordinary Germans, who, they maintain; are civilised people. Such excuses make the situation no less disturbing, since they reveal that ordinary Germans have shut their eyes to the reali- ties, or apathetically acquiesced, and show no sense of their responsi- bility for crimes repeatedly committed by agents of a Government which they accepted. The Allies appear to be confronted with a nation the vast majority of whom are destitute of any public conscience whatever. That fact must govern the treatment of them.