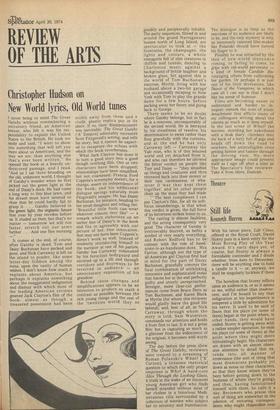 I never bring to mind The Great Gatsby without remembering a university friend, an American lawyer, who felt it was his responsibility to explain the United, States to the British. He took me aside and said, "I want to show You something that will tell you more about us Americans, and the way we are, than anything else that's ever been written." He opened the book at a heavily underscored passage, and I read, "And as I sat there brooding on the old, unknown world, I thought of Gatsby's wonder when he first picked out the green light at the end of Daisy's dock. He had come a long way to this blue lawn, and his dream must have seemed so close that he could hardly fail to grasp it. . . . Gatsby believed in the green light, the orgiastic future that year by year recedes before us. It eluded us then, but that's no matter — tomorrow we will run faster, stretch out our arms further . . . And one fine morning It comes at the end, of course, after Gatsby is dead, Tom and Daisy Buchanan have packed and gone, and Nick Carraway is left on the island to ponder, like some latter-day Gibbon among the ruins, upon the vanity of human wishes. I don't know how much it explains about America, but perhaps it explains something about the exaggerated indignation and dismay with which most of the leading American reviews greeted Jack Clayton's film of the book: almost as though a treasured possession had been

stolen away from them and a crude, plastic replica put in its place. If so, their disappointment was inevitable. The Great Gatsby ('A' Empire) admirably recreates Scott Fitzgerald's setting, and tells his story, but it cannot be expected to recapture the echoes with which the book reverberates.

What Jack Clayton has done is to turn a good story into a good though overlong film. One or two characters have been dropped; relationships have been simplified, but not coarsened. Francis Ford Coppola's screenplay doesn't, for a change, assert its Independence of the book; and his additional dialogue springs naturally from Fitzgerald's images. He has Daisy Buchanan, for instance, bending to her small daughter and telling her, "Beautiful little fools can wear

whatever colours they like" a remark which elaborates on an earlier line of Daisy's in the book and fits in agreeably with our picture of her. One Innovation, that may n6t have been Coppola's, doesn't work so well. Instead of modestly introducing himself to the narrator at one of his parties, Gatsby has Carraway summoned by his ferocious bodyguard and escorted up in a lift and through corridors and doorways to be received in audience an unnecessary exposition of his grandeur.

Behind these changes and simplifications appears to be an intention to produce as stark a contrast as possible between the rich young things and the rest of the 'twenties world they so gaudily and peripherally inhabit. The party sequences, filmed in and around the grand Narragansett houses north of Long Island, are spectacular to look at — the fountains, the champagne, the lights and colours, a whole menagerie full of slim creatures in chiffon and tuxedo, dancing to Charleston music against a background of brittle laughter and broken glass. Set against this is the world of Tom Buchanan's mistress, Myrtle, living with her husband above a two-bit garage and occasionally escaping to New York with Tom to play the grande dame for a few hours, before packing away her finery and going back to George.

There seems to be no doubt where Gatsby belongs, but in fact he is a nouveau, unconquerably of the second world. He is betrayed by his steadiness of resolve, his determination to swim rather than float gracefully with the currents, and at the end he has only Carraway left — Carraway the Yale man, who is of this leisured world and yet detached from it, and who can therefore be allowed the bitter verdict on people like Tom and Daisy — "they smashed up things and creatures and then retreated back into their money or their vast carelessness, or wha tever it was that kept them together, and let other people clean up the mess they had made . . ." The best compliment I can pay Clayton's film, for all its softfocus meanderings, is that when this verdict is given, the full force of its bitterness strikes home to us. The casting is almost faultless, and the acting consequently very good. The character of Gatsby is irretrievably blurred, as befits a symbol of very nearly everything, and Robert Redford has to be content with the role of handsome-is-as-handsome-does. Mia Farrow, although not the type of all-American girl Clayton first had in mind for the part of Daisy Buchanan, gracefully conveys the fatal combination of unthinking innocence and sophisticated ennui that leaves her at the end perfectly guilty and utterly unreproached. Stronger, more clear-cut perfor mances come from Bruce Dern as Tom Buchanan, and Karen Black as Myrtle (for whom this reviewer would gladly leave the good life behind); and, best of all, as Nick Carraway, through whom the story is told, Sam Waterston commands our attention and holds it from first to last. It is not a great film: but in capturing so much as a glimmer from the iridescence of the original, it becomes well worth seeing.

The day before the press show of The Great Gatsby, reviewers were treated to a screening of Roman Polanski's What? ('X' Curzon), a tiresome rhetorical question to which the only proper response is Why? A hard-core Alice Through the Looking Glass, it trails in the wake of an innocent young American girl who finds herself stranded without most of her clothes in a luxurious Medi terranean villa surrounded by a collection of wierdos who subject her to scrutiny and humiliation. The dialogue is as limp as the reactions of its audience are likely to be, and the only mystery is why an immensely talented film-maker like Polanski should have turned his finger to it.

Possibly he was attracted by the idea of new-world innocence coming, or failing to come, to grips with old-world perversity — a kind of female Candide dis couraging others from cultivating her garden. Or perhaps it is just one of his little diversions, like Dance of the Vampires, in which case all I can say is that I don't like his sense of humour.

Films are becoming easier to understand and harder to in terpret: remark the note of ironic detachment that afflicts many of my colleagues writing about the cinema as much as it does myself. In the last scene of What? the heroine, shielding her nakedness with a desk diary, clambers into the back of a lorry full of pigs and heads off down the road to nowhere, her unintelligible cries getting fainter and fainter through the driving rain. No more appropriate image could present itself as I sign off after a stint as The Spectator's film reviewer. Take it from there, Duncan.