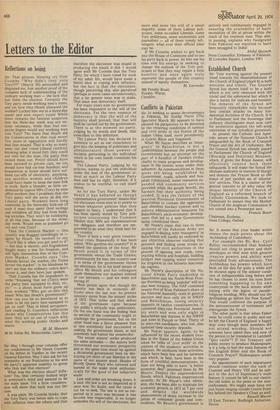 Sir: Your warning against the present trend towards the disestablishment of the Church of England (April 6) is both welcome and timely. The General Synod has shown itself to be a body which is not only obsessed with the trivial and the ephemeral but which is also a haven for radicals and heretics. The debates of the Synod are frequently remarkable only because they contain attacks on many fundamental doctrines of the Church. It is to Parliament and the Sovereign that ordinary churchgoers must now turn for protection against the left-wing extremism of our synodical governors.

At present the Catholic and Apostolic nature of the National Church is safeguarded by the Book of Common Prayer and the Act of Uniformity. But the General Synod has already passed to Parliament the Church of England (Worship and Doctrine) Measure, which, if given the Royal Assent, will effectively remove both these safeguards. It will make the Synod the ultimate authority in matters of liturgy and demote the Prayer Book to the status of just another set of 'alternative' services. This is a matter of the gravest concern to all who value the unique identity of the Church of England as a reformed branch of Catholic Christendom. We look to Parliament to ensure that the Mother Church of the Anglican Communion is not turned into a Protestant sect.