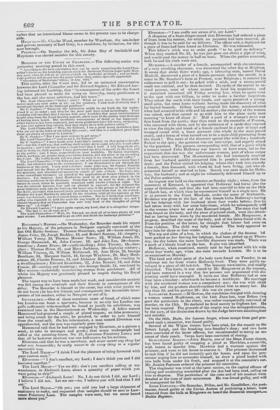 Page 10, 20 August 1831 — "According to the best calculation that can be made respecting
Close

"According to the best calculation that can be made respecting

the Lord Chan- cellor's business, his Lordship cannot reach his Bankrupt Petition paper until Mon- day next, when he will sit at eleven o'clock on bankrupt petitions ; and no bank- rupt petition will be put into the paper before then unless specially appointed.

"Secondary of Bankrupts' Office, 19 Aug. 1831." This notice, after the Court met, led to an animated conversation between the Lord,Chaneellor and Sir Edward Sugdeu ; Sir Edward hav- ing informed his Lordship, that "in consequence of the order the Court Lad been pleased to make for rising on Saturday, many gentlemen at the bar, and also many solicitors, had left town." The Lord Chancellor—" Order I order I What do you mean, Sir Edward? I never made any such order at all ; on the contrary, I said most distinctly that I would get through all the bankrupt petitions."

Sir E. Sagden—" Whatever the intimation might be, my Lord, the bar under- stood it as au. order ; and they for the most part have acted accordingly. Your lordship will recollect that I always told your Lordship that great inconvenience would arise from the Court hearing appeals, when none of the parties were desirous of having them heard. The inevitable consequence of doing so has happened : other business has been neglected, and many gentlemen have left town, supposing, as was very natural they should, that they might do so with perfect safety."

The Lord Chancellor—" Why, Sir Edward, I see a great many gentlemen here who are not in the habit of attending this court ; and that is a sufficient proof that there are plenty of counsel in London."

Sir E. Stigden—" But I am most anxious to get away." The Lord Chancellor—" Anil so am I, Sir Edward."

Sir E. Sueden—" I must doubt your Lordship's anxiety on that point—(Laugh- ter)—but this I will say, that nothing shall induce me to come into this Court after to-morrow; and I will not return a single brief that I hold. I will keep them all ; and in doing so, shall consider I have performed my duty to myself, to the bar, and to the public ; and, I hope, respectfully to your Lordship. My duties elsewhere, which, perhaps, are greater than ever before known, will not allow of my attending the Court. My bodily health will not allow it, even if my clients should suffer." The Lord Chancellor—. Sir Edward, no one will regret your absence more than I shall; but whatever may be the consequence, I am determined to get through the business of the court. I very well recollect, some years ago, Sir Samuel Rowdily and myself left the House of Commons for weeks together at four or five o'clock in the morning, and attended our respective courts at nine o'clock. We have, too, some remarkable instances on record of the application of former Chancellors to business. For instance, Lord Hardwicke used to sit frnm nine o'clock in the morning until four in the afternoon. From four to six he used to dine ; at six to return to court, where he generally remained until twelve o'clock at night. Nor was the interval between four and six allowed to counsel; for the moment the great luminary sank into the horizon, the lesser one, in the person of the Master of the Rolls, ascended, that learned judge presiding in court from four to six o'clock. Neither did Lord lIardwicke adjourn for the vacation until all the business of the court was finished ; nor do I intend doing so either. Nor do I think that any Chan- cellor who expected to hold the seals for any length of time would do so ; and I should imagine that no Chancellor was ever very fond of the thoughts of giving ahem up." (A laugh.1 Sir Edward Sugden—" I must again repeat, my Lord, that it is altogether irregu- hr. The fact is, we all want rest." The Lord Chancellor—" Well, Sir Edward, we shall all of us have plenty of rest meat winter. I am determined to go on with and finish the bankrupt petitions."