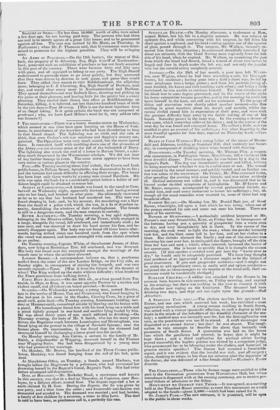 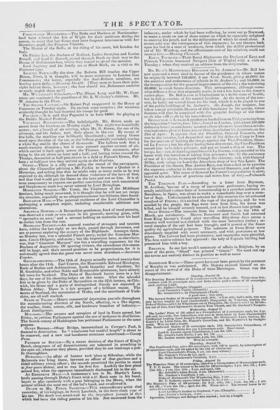 THE Con.ONAT/ON.—Those who by former usage were entitled to take

part in the Coronation processions from Westminster Hall, but whose attendance is dispensed with at the ensuing ceremony, are to receive per- sonal tickets of admission to the Abbey. MONUMENT TO GEORGE THE THIRD.—It was agreed, at a meeting held at the Thatched House yesterday, to erect this monument on a scale adapted to the funds—about 2,5001.—which had been raised for it. Sr. JAMES'S PARK.—The new entrance, it is promised, wiU be open to the public in three weeks. FASIIIONAULE Moveaussers.—The Duke and Duchess of Northumber- land have selected the Isle of Wight for their residence during the season, in order that her Grace may have frequent intercourse with her illustrious pupil, the Princess Victoria. The Master of the Rolls, at the rising of his court, left London for

On Friday last, the Duchess of Bedford, Ladies Georgina and Leuisa Russell, a ml Lord C. Russell, passed through Perth on their way to the Doune of Rothiennirchus, where they intend to spend the autumn.

Lord sluelesey and his family are at Black Rock, on a visit to Sir Harcourt Lees.

LEAVING. Tow.—By the time the Reform Bill reaches the Upper House, Peers, it is thought, will be more numerous in London than Commoners ; the latter, especially the Anti-Reform members, are leaving town daily. —Morning Herald. [They seem to leave their prin- ciples behind them, however ; else how should the ,Reformers contrive so easily to pick them up MR. WELLESLET's CHILDREN.—The Misses Long and Mr. W. Cour- tenay are nominated the guardians of Mr. L. Wellesley's children. Mr. W. remains in the Fleet.

Tun SECOND Carrsre.—Sir Robert Peel reappeared in the House of Commons on Tuesday night. lie excited some surprise ; the members evidently thought he had deserted his troops for good. PAGANINI.—It is said that Paganini is to have 1000/. for playing at the Dublin Musical Festival.

VAUXHALL IlsasooNtsas.—The indefatigable Mr. Green made an ascent from the Gardens on Monday right. The night was beautifully

serene; not a" breath of air stirring, when Mr. G. Green, the son of the aeronaut, and his father, took their places in the car. By means of fire-balls, the machine was brilliantly illuminated ; anti young Green stood upon the edge of the car, as the balloon gradually ascended, waving a white flag amidst the cheers of thousands. The balloon took first a south-western direction ; but it soon entered another current of air, which carried it back again across the Thames. The aeronauts, after being in the air above an hour and a half, and having twice crossed the Thames, descended at half-past eleven in a field at Parson's Green, Ful- ham; at half-past two they arrived again at the Gardens.

Oarne—There is a silly story going the round of the newspapers, about the Chancellor advising a Mr. Parkin to become a Quaker or a Moravian, and telling him that he might take as many oaths as he was required to do, although he deemed them violations of the laws of God, and that God would put the blame on the laws and not on him. It is al- most unnecessary to express our perfect conviction that such nonsensical and blasphemous trash was never uttered by Lord Brougham. MIDDLESEX Sesstous—Mr. Const, the "Chairman of the Middlesex Sessions, being much recovered, it is thought that he will not yet resign the situation, especially as no adequatesuccessor has hitherto been found. BROUGHAM Hstas—The paternal residence of the Lord Chancellor is undergoing a complete repair, including considerable additions and alterations.

AMATEUR MOWING.—A Devonshire gentleman, fond of rural pursuits, was observed a week or two since in his grounds, mowing grass, with "spectacles on nose," and a servant holding an umbrella over his head to shelter him from the sun.

HIGHLAND Tounisr.—An unusual number of strangers and tourists have, within the last eight or ten days passed through Inverness, and are at present exploring the scenery of ale Highlands. Amongst these, on Monday last, was a splendid French party, styled the Countess Mar- Bess, Count Ohigarty, and suite ; but the impression here, as elsewhere, was that " Countess Marness" was but a travelling cognomen for the DuChess of Angouleme. Of sporting visitors' the attendance this season Will be large, and their reward promises to be proportionate, for it is universally agreed that the game was never more abundant.—Inverness Courier.

GRouse-snoornere—The 12th of August actually arrived twenty-four hours after the 11th. Earl Craven, the Honourable Edward Montague, Earls of Rothes and Ashburnham, Lords Grantley and Gardiner, Sir B. Goodriche, and other Noble and Honourable sportsmen, have already left town for Scotland. The Duke of Buccleuch leaves town in a few days, for one of his shooting-lodges on the moors. After the splendid fete to be given by the Duke of Devonshire on the 27th instant, at Chis- wick, his Grace and a party of distinguished friends are expected at Bolton Abbey. There is a fair prospect of a brilliant season. The moors of Scotland, the mountains of Wales, and the moorlands of Y ork- shire , are all well stocked. STATE OF TitADE.—Heavy commercial depression prevails throughout the manufacturing districts of the North, affecting, in a like degree, the woollen, linen, cotton, silk, and hardware branches of industry.— Leeds Intelligencer. MOLASSES.—The owners and occupiers of land in Essex agreed, last Friday, to petition Parliament against the use of molasses in distillation. The Scotch county of Haddington has petitioned Parliament to the same purpose. OLNEY BitinoE.—Olney Bridge, immortalized in Cowper's Task, is doomed to destruction. Its " wearisome but needful length" is about to be removed, and a new and handsome structure substituted.—County Press.

FREEDOM OF SPEECH.—By a recent decision of the Court of King's Bench, clergymen of all denominations are tolerated in preaching in the open air, wherever they please, provided they do not interrupt a pub- lic thoroughfare. Dunsueo.—An affair of honour took•place at Gibraltar, while the Britannia Was lying there, between an officer of that garrison and a titled military young officer ; the seconds permitted the parties to stand at four paces distant, and to toss for first fire. Luckily the first pistol missed fire, when the opponent immediately discharged his in the air. AN EXPENSIVE MEAL.—A tradesman's son in St. Martin's Lane, lately passing through Duke's Court with a 5/. Bank note in his hand, began to play carelessly with a goat belonging to the Mews, when the animal nibbled the note out of the lad's hand, and swallowed it. DEATH OF MR. PETER IC/ism-Tn.—This extraordinary artist died yesterday, at his indgings, in South Lambeth, in the forty-sixth year of his age. His death was occasioned by the imprudent pursuit of that which had been the ruling passion of his life. Not recovered from the influenza, under which he had been suffering, he went out to Norwood, to make a study on one of those scenes on which he especially delighted to exercise his pencil, and in the delineation of which he stood alone. A severe cold was the consequence of this exposure ; he was thrown back upon his bed in a state of weakness, from which the skin] professional aid of Mr. Wardrop, and the affectionate care of his relatives, could not recover hinn—Morniny Chronicle.

ROYAL Tuunisrs.—Their Royal Highnesses the Duchess of Kent and Princess Victoria honoured Newport (Isle of Wight) with a visit on Tuesday; when they received an address from the corporation.