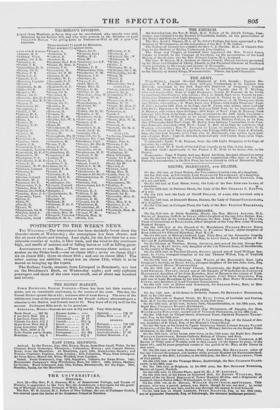 On the 3rd inst. at East Sheen, Sorry, the Lady of the Rev. EDWARD JAMES, of a daughter.

On the 16th inst. in Portman Street, the Lady of the Rev. CHARLES C. EArtzorr, of a son.

On the 14th inst. the Lady of Sheriff POLAND, of a son, who survived only a few hours.

On the 14th inst. at Duncroft House, Staines, the Lady of Color:lel-CARMICHAEL, .of a daughter.

On the hILls inst. in Cadogan Place, the Lady of the Rev. FRANCIS THACKERAY, of a son.

On the 9th inst. at the Cathedral at Bangor, the Rev. Joust WILLIAM TREvOlt„ Vicar of Carnarvon, to ELIZABETH, eldest daughter of the Very Rev. John Warren, Dean of Bangor.

On the 9th inst. at Bishop's Lydiard, Capt. F;rz-Rov, of the Grenadier Guards, second son of the late Lord Henry Fitz-Roy, to LUCY SARA, third daughter of Sir Thomas B. Lethbridge, Bart.

On the 9th inst. at Tiverton, Devon, GEORGE, only son of the late George Bar- nard, Esq. to MARY ANNE, only daughter of the late Edward Isaac, of Brookheath, in the county of Hants, Esq.

On the 9th inst. at Cheltenham, Capt. WAITE, of the Honourable East India Company's Service, to MARY ARNE, youngest daughter of the late John Icon, Esq. of Bournbrook House, Worcestershire.

On the 18th inst. at All Souls' Church, Marylebone, the Right Hon. and Rev. Lord CHARLES PAULET, second son of the Marquis of Winehester, to CAROLINE MARGARET, daughter of Sir John Ramsdell' Bart. of Byram in the county of York. On the 18th inst. at St. George's, Hanover Square, Joux EDEN SPALD/NG, Esq. only sou of Lady Brougham by her late husband, to the Hon. MAR WILHELMINA UPTON, only daughter of Lord Viscount Tenipletown.

On the 14th inst. at his house in Berkeley Square, Sir BENJAMIN HORHOUSTr, Bart. in his 75th year. On the 16th inst. in Regent Street, Sir Hoerr InteRs, of Lochalsh and Coxtom Bart. M.P. for the county of Sutherland, in his 65th year.

On the 13th inst. at his seat, Sydney Park, Gloucestershire, in his 78th year, the Right HOO. CHARLES 13RAGGE BATHURST. On the 8th inst. on board his Majesty's ship Madagascar, off Nauplia, the Ron. IVENTvr °urn PoNs °NOY, Seeend son of Viscount Duncannon, in his 18th year.

On the 12th inst. HARRIET, the wife of P. Le Conteur, Esq. of the Island of Jer- sey, daughter of It. Clark, Esq. of his Majesty's Chapel Royal.

On the 9th inst. at his house in Upper Grosvenor Street, Colonel ROGER Er.r.ror ROBERTS, of the Hon. East India Company's Military Service on the Bengal Esta- blishment, in his 78th year.

On the 10th inst. at his house, near Cove, in his 76th year, the Right Rev. Doctor WILLIAM CoPP(NGER, Roman Catholic Bishop of Cloyne and Ross.

On the 12t11 inst. at Ipswich, in his 90th year, the Rev. THOsIAS COBBOLD, Rector of 1Vilby and of Woolpit, both in that county (of the former 64 years, of the latter 50), and 53 years perpetual curate of the parish of St. Mary at the Tower in that town.

On the 8th inst. at her seat, Bretton Hall, Yorkshire, Mrs. BEAUMONT, relict of the late Colonel Beaumont, and mother of the present Member for Northumberland. At Orton-on-the-Hill, Leicester, in his 83rd year, the Rev. J. Parma none., Vicar of that parish. On the 11th inst. at the Vicarage House, Hatherleigh, the Rev. CRADOCK GLASS., COTT, in his 99th year. On the 13th inst. at Brighton, in his 68th year, the Rev. RICHARD ROBERTS, Rector of Spawl, Norfolk. On the 14th inst. in Chester-Place, aged 58, Mr. J. W. LONGMAN. On the 16th inst. at his house on Stamford Hill, Sir DANIEL WILLIAMS, Hut. Colonel of the 1st Royal Regiment of Tower Hamlets Militia, and a Magistrate of Lambeth Street Police Office,Whitechapel, in his 79th year. On the 28th ult. at St. Buryan, WILLIAM BROWNFIELD, aged 54 years. This person, who was a parish pauper, was dumb, though he was not deaf ; he never had teeth, nor had he any hair, and he was through life unable to feed himself. On the 18th inst. in South Lambeth. PETER NASMYTH, Esq. in his 46th year, son of Alexander Islasmytb, Esq. of Edinburgh, the eminent landscape-painter.