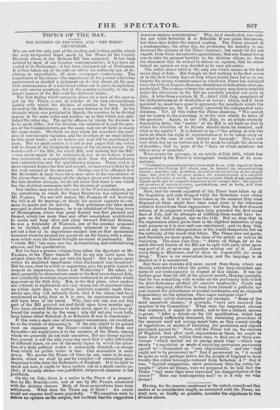 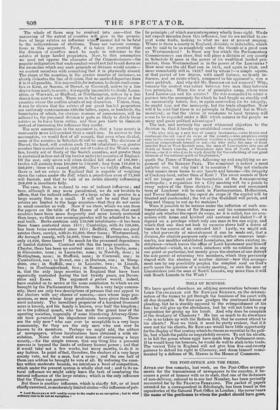 Page 15, 20 August 1831 — Having, for the reasons mentioned at the outset, considered this
Close

Having, for the reasons mentioned at the outset, considered this

matter at so considerable length, as connected with the Times, we shall now, as briefly as possible, consider the objections .to the division clause.

tors of large estates an influence whiclitannot fail to be fatal to the independence of elections. There are various assump- tions in this argument. First, it is taken for granted that the division of counties must be made in reference to the estates of large landed proprietors. Now, to this assumption we 'need not oppose the character of the Commissioners—the popular indignation that such conduct would not fail to call down on the anomalies which any such principle of division would create— we content ourselves with remarking that it is physically absurd. The shape of the counties, in the greater number of instances, so clearly indicates the line of division, that no marked departure from it is at all possible. It is impossible,for instance, to divide such coun- ties as Kent, or Sussex, or Dorset, or Cornwall, unless by a line drawn from north to south ; it is equally impossible to divide Lanca- shire, or "Warwick, or Stafford, or Northampton, unless by a line drawn from east to west. There are in fact not above three or four counties where the outline admits of any discretion. Unless, then, it can be shown that the estates of our great landed proprietors are uniformly 'conterminous with the lathes, rapes, or hundreds, the boundaries of which, for obvious reasons of convenience, will be adhered to, the proposed 'division is quite as likely to 'divide these estates as to leave them entire, and thus pro hallo to diminish instead of increasing the infhience they confer.

The next assumption in the argument is, that a large county is necessarily more independent than a small one. In answer to this assumption, we would first of all remark, that even when divided, none of the counties in Schedule G will be small. The divisions of Dorset, the least, will contain each 72,000 inhabitants—a greater number than is contained in eight out of twelve of the Welch coun- ties, twenty out of thirty of the Scotch counties, and greater than is contained in four out of the twelve undivided counties of England. Of the rest, only seven will when divided fall short of 100,000 ; twelve will contain from 100,000 to 1.50,000; four from 150,000 to Z00,000; three will exceed 200,000. Now we boldly affirm, that there is not an estate in England that is capable of weighing down the voters under the Bill, which a population even of 72,006 will furnish, and that to talk of an estate directly influencing 200,000 is inordinate folly.

The case, then, is reduced to one of indirect influence; and here, although it may seem paradoxical, we do not hesitate to affirm; that the indirect influence of a large estate is greater in a large county than in a small. It will not be said that large estates are limited to the large counties—that they do not occur in small counties as Well. Now if we show, which we can from the papers on the table of the House of Commons, that small counties have been more frequently and more keenly contested - than large, we think our seeming paradox will be admitted to be a: real truth. Barks contains only 130,000 inhabitants—it has been three times contested since 1811; Cambridge, with its 120,000, has been twice contested since 1811; Bedford, (there are great estates there, surely), with its 83,000, three times • Westmoreland, the borough county, with 50,000, three times ; Huntingdon, with only 44,000, three times ! So much for the presumed dependence of limited districts. Contrast with this the large counties. In Chester, there has been no contest since 1811 • in Derby, none ; in Gloucester, none ; in Lancaster, none ; in Norfolk, none ; in Nottingham, none; in Stafford, none ; in Cornwall, one ; in Cumberland, one ; in Dorset, one ; in Durham, one ; in Shrop- shire, one • in Suffolk, one in Leicester, two ; in Lincoln, two ; in Northumberland, two; in Somerset, two. The fact is, that the only large counties in England that have been repeatedly contested during the last twenty years, are Devon- shire and Essex. The argument d priori would, indeed, have enabled us to arrive at the same conclusion to which we are brought by the Parliamentary Returns. In a very large commu- nity, there are only two descriptions of persons that can appeal to the electors with any chance of success,—men whose large pos- sessions, or men whose large professions, have given them suffi- cient notoriety. The hereditary proprietor of a hundred thousand acres is known, and his family is known, over half the kingdom ; so is the political quack, who has made the grand tour of the spouting societies, especially if some blundering Attorney-Gene- ral have persecuted his impudence into consequence. These are the only men * who can ever be acceptable to a very large community, for they are the only men who can ever be known to its members. Perhaps we might add, the editors of newspapers, whose lucubrations have obtained a wide cir- culation.- None else would ever dream of canvassing a large county,—for the simple reason, that any thing like a personal canvass is beyond the limits of ordinary human power and that it would take' not a few weeks, but many months, power; do it in any fashion. In point of fact, therefore, the electors of a very large county vote, not for a man, but a name ; and the one half of them can seldom be brought to vote at all. By reducing the coun- ties within moderate bounds, we introduce a host of competition, Which under the present system is wholly shut out ; and to its na- tural influence we might safely leave the task of combating the natural influence of the large estates; which is the only influence that the Times can perceive. But there is another influence, which is chiefly felt,- or at least chiefly exercised, in moderately limited circles—the influence of pubs • Lord Bow/GRAN will readily occur to the reader as an exception 3, bat to what ordinary rate 1s he not an exception /

lie principle ; of which ourcontemporary wholly loses sight. We do not expect miracles from this influence, but We are entitled to ex-

pect some fruits, looking to what we are at present reaping. Where is there a county in England, divisible or indivisible, which can be said to be so completely under the thumb of a great man - as Westmoreland ? Is there any line which the Parliamentary Commissioners can draw, that will place a division of any county

in Schedule G more in the power of its wealthiest landed pro- prietor, than. Westmoreland is in the power of the Lowrimas ? How near was the old Earl run in 1818, and again in 1820, and more remarkably still in 1826? and by whom ?—a simple squire,

at that period of low degree, with small fortune, no family in- fluence, and an estate which, compared to his opponent's, was a

mere paddock. And why did Mr. Ilitouonmd not succeed? Why, because the contest was rather between two men than between two principles. When the war of principles came, where were

Lord LONSD ALE and his estates ? He was compelled to admit a

partner into the monopoly for which he had fought so sturdily and so successfully before, lest, in again contending for its integrity, he might lose, not the monopoly, but the trade altogether. Now will it be said that there is no principle in England but in West- moreland; or that the virtue of resistance to local tyranny will cease to be regarded under a Bill which secures to the people so many and great political advantages ?

The last,- and certainly the most whimsical objection to the division is, that it breaks up established associations.

"lie who sets up a new line of county landmarks,—who blunts and confounds the old esprit du corps of the county,—who perplexes every

man in the county upon the question wilether a requisition for a county meeting comprehends himself or not,—he who sinks the man of Kent into the East or West Kentish man, the man of Lincolnshire into one of North or South Lincoln, of Devonshire into him of North or South Devon,—he it is who goes to work directly for the enfeebling of one great element of the national spirit of Englishmen,"

quoth the Times of Thursday, following up and amplifying an ar- gument of Sir ROBERT PEEL. The complaint is indeed a most

pathetic one, but why limit it to counties ? Why not vindicate what comes more home to our hearts and bosoms—the integrity of Cockney-land, rather than of Kent ? The sweet sounds of Bow will no longer mark out the boundaries of the h-exasperating

metropolis ; a requisition for a City meeting will be a puzzle to every native of the three districts ; the ancient and recognized term of Londoner will be sunk in Finsburyensian, Holbornian, and Tower Hamletian; the esprit du corps of the capital will be blunted and confounded ; the wit of the Guildhall will perish, and Gag and Magog be cut up for matches !

Were it possible to be serious under the infliction of such sen- timentalisms as those of Sir ROBERT and his commentator, we

might ask whether the esprit du corps, as it is called, has no con-

nexion with home and kindred and customs and dialect ?—if it depend on a privilege which only one man in ten can enjoy, and which that one does not look to exercise above half a dozen of times in the course of an extended life ? Lastly, we might ask by what perversity of misstatement it can be made out, that a:

division for election pu9poses only —which neither removes land- marks; nor modifies established boundaries, nor alters existing in- stitutions—which leaves the office of Lord-Lieutenant and She- riff

undisturbed—which, in a word, interferes with no relation in any one point or particular, but merely gives the electors of one district - the sole power of returning two members, which they previously shared with the electors of another district—how this arrange- ment can by any possibility perplex the simplest soul on God's earth upon the question of a county meeting, or sink the man of Lincolnshire into the man of South Lincoln, any more than it will sink South Lincoln in the Wash?