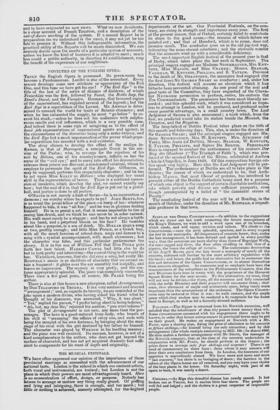 NOVELTIES OF THE ENGLISH OPERA.

TRULY the English Opera is possessed. Its green-room has become a Pandemonium. Lucifer is star of the ascendant. Every season develops some new attribute or appearance of the Evil One, and this time we have got his eye! "The Evil Eye" is the title of the last of the series of dramas of diablerie, of which Freischiaz was the first, followed by Faust, the Bottle Imp, the Devil's Ducat, and the Vampire. Germany, that favoured region of the supernatural, has supplied several of the legends ; but the Evil Eye is a superstition of the Levant. Mr. ARNOLD is deter- mined to ransack the world for traits of Satanic character ; and when he has exhausted the supply, he must "go below" to re- cruit his stock,—unless he tires out his audiences with sulphu- reous smells and evil influences, which is a very possible case. And indeed there is some sign of misgiving as to the effect of bona fide representations of supernatural agents and agency, in the circumstance of the Sorceress being only a make-believe, and the Evil Eye but a mock impersonation of the power which popu- lar superstition has invested with a real existence. The story chosen to develop the effect of the malign in- fluence, is that of Mavroyeni, a renegade Greek in the ser- vice of the Pasha; who, in revenge for the rejection of his suit by Helena, one of his countrywomen, inflicts on her the ,cprse of the "evil eye ;" and to carry into effect his denunciation, releases from prison one Barozzi, a condemned criminal, whom he employs to personate the spirit of the Evil Eye. 0!SmiTH, as may be supposed, performs this respectable character • and he has to act upon Miss KELLY as Helena; who displayed her usual skill in the representation of terror. There is a confused succes- sion of incidents, which develop the plot, we cannot exactly say bow; but the end of it is, that the Evil Eye is put out by a pistol- ball, and justice is done to all parties. 0!SMITH is not merely a limb of Satan—he is an incarnation of dwrnons ; we wonder where he expects to go? JOHN REEVE, trio, is as usual the jovial fellow of the piece —a lump of fun : whatever happened to him, it was "all fun ;" and he was in glorious fooling himself. He is so genial a sot, that it seems impossible to tire of .seeing him drunk, and we think he can never be in sober earnest. is walk must surely be a stagger ; and has he not always a bottle in his hand, and a perpetual bloom on his face? He tumbles about like a porpoise, in a sea of drink. Mr. MILLAR sings a song or two, prettily enough ; and little Miss .POOLE, as a Greek boy, with all the mock heroism of school-days, sings and dances to a song with a cymbal accompaniment, with much cleverness ; but the character was false, and this particular performance too showy. It is in the son of William Tell that Miss POOLE puts forth her best talent. HARRIET CAWSE had little else to do but to look pretty and interesting—the easiest thing in the world for her. We believe, however, that she did sing a song, but really Mr.

RODWELL'S music is so destitute of character that we cannot re- tain a fragment: it glides over the ear smoothly but insipidly, and leaves no impression. The scenery is very pretty, and the cos- tume appropriately splendid. The piece was completely successful. There were a few good puns, of course, Mr. PBAKE being the author.

There is also at this house a new afterpiece, called Arrangement, by Don TELESFORO DE TRUEBA. It is a very confused and hurried -I` arrangement ;" and, as regards its brevity, we are reminded of the joke upon a modern divine, who having asked his friend what he thought of his discourse, was answered, "Why, it was short." "Yes," replied the parson," I prefer being short to being tedious." "Ah, but, my dear Sir," rejoined his auditor, "you were tedious !" The plot of Arrangement is not new, any more than the per- sonages. The hero is a good-natured busy-body, who boasts of his skill at "arranging" the affairs of every one, and ends with being the marplot of his own fortunes, by bringing about the mar- riage of his rival with the girl destined by her father for himself. 'The character was played by WRENCH in his bustling manner ; and the piece was well received. Its success, however, is not of a kind complimentary to the author, who does not get beyond the surface of character, and has not yet acquired dramatic tact suffi- cient to compensate for his want of depth and originality.