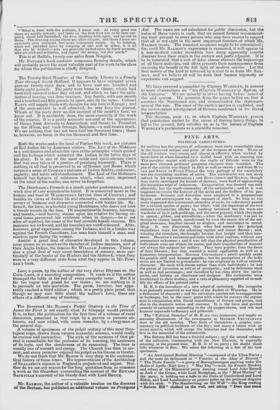 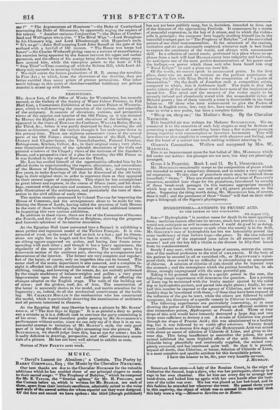 IN nothing has the progress of refinement been more remarkable than in the improved temper and point of the weapons of satire. Those of the old warfare were coarse, and almost as effective when wielded by brute force as when launched by a skilful hand with an unerring eye. The purulent matter with which the shafts of ridicule were for the most part charged, produced gangrene wherever they wounded. The pen of the satirist was dipped in filth as well as venom ; and from BUT- LER and SWIFT to PETER PINDAR the very garbage of the vocabulary was the circulating medium of satire. The caricaturist was not more refined in his representations ; and ROWIANDSON and GII.RAY, though they rarely outstepped the bounds of decency, were fond of approaching the dangerous edge of indecorum. Exaggeration was deemed not only allowable, but the staple commodity of the caricaturist ; and in it was supposed to consist the humour of the artist and the drollery of his per- formance. Grimace and distortion were employed to a preposterous degree, and extravagance was the measure of merit. So long as hit- mour supported this scaramouch absurdity of style, its redundancy passed for a swinish species of gusto ; but when, with the departure of the two eminent caricaturists alluded to, nothing remained but the worn-out wardrobe of their jack-puddings, and the mute puppets which theymade to squeak, gibber, and attitudinize —when the machinery was put in Motion by clumsy hands, unenlivened by even the coarse wit of the ori- ginal showmen, laughter turned to disgust, and merriment to moral- izing. It was discovered, that what had seemed the principal ingredients were but the colouring matter and coarse flavour ; and, wanting the stimulant, the draught became first insipid and then nau- seous. DIGHTON'S caricature-portraits were sober realities, without any pretensions to humour ; and it was felt that the physical peculiarities of individuals were not objects for satire' and their singularities of manner not always fair subjects for raillery. They were popular, from the force of their likeness ; but they wanted a moral application as well as a humorous interpretation. GEORGE CRUIESHANK pencil quickly made his graphic skill and humour popular ; but his perceptions of the ludi- crous are not limited to portraiture : he can originate as well as embody character. He deals with classes rather than with individuals ; he has the power of invention as well as of perception ; and lie delineates ideal as well as real personages ; and therefore he has risen above the carica- turist, and become an illustrator and designer. His caricatures were intellectual in their drollery, and a vein of pleasantry supplied oil to mol- lify the effects of his pointed satire.

H. B. is the introducer of a new school of caricature. His incognito

is as jealously preserved as was that of the Author of Waverley. He is a delineator of character ; and his caricature consists not in exaggeration or burlesque, but in the comic gusto with which he conveys the expres- sion in conjunction with literal resemblance of feature and person, and also in the dramatic action and Costume. It is the farce and genteel comedy of caricature succeeding to the old puppet-shows, and wit and humour supersede buffoonery and gibberish.

The "Political Sketches" of H. B. are very numerous, and supply as

amusing illustrations of the newspapers as GEORGE CRUIRSHANK does to the old novelist. They form of themselves a graphic com- mentary on political incidents of the day; and many a latent wish or secret motive, which will escape the historian and the chronicler, will live in the memorial of the caricaturist.

The Reform Bill has been a fruitful subject ; apd the second volume

of the collection, commencing with the New 10nristry, is especially amusing at the present time. II. B. is of no party ; his shafts shoot folly wherever it flies. We select the following as a few of his best specimens.

"An Anticipated Radical Meeting "—composed of the Ultra-Tories ; and the same set delineated as "Votaries at the Altar. of Discord." "The Niobe Family "—a group of Boroughmongers expiring under the shafts of Apollo (Earl Grey.) "May Day "—with Sir Francis Burdett and others of the Ministerial party dancing round Lord John Russell as Jack o' the Green, while Lord Brougham, as the "Maid Marian" of the party, is holding out a ladle to the Duke of Cumberland and Lord Eldon, and Lord Londonderry en passant pokes up the petticoat disguise with his stick. "The Handwriting on the Wall"7-the Bing reading "Reform Bill" chalked on the wall, and asking "Does that mean Me ?" "The Argumentum ad Hominem "—the Duke of Cumberland converting the Duke of Gloucester, by apparently urging the neglect of his talents. "Another ominous Conjunction "—the Dukes of Cumber- land and Wellington tete-a-tete. "The Rival Wigs "—Lord Brougham in his Chancery wig, and Lord Ellenborough with Hyperion's curls. 44 It's no go"—John Bull stopping Lord John Russell at the gate of his orchard with a hat-full of 191. renters. "The House wot keeps bad hours"—Sir Charles Wetherell giving vent to a torrent of exacerbation; his exertion being apparent by the fissure between his upper and nether garments, and the effects of his energy being shown by the sleepy mem- bers around him, while the time-piece points to the hour o: VII. "Stop Thief"—Time running off with the Reform Bill, while Lord AI- thorp only succeeds in securing Schedule A.

We shall notice the future productions of H. B. among the novelties in Fine Art ; to which, from the cleverness of the drawing, they are better entitled than many prints of greater pretensions. One other merit belongs to this series of sketches—neither indelicacy nor private Scandal is mixed up with them.