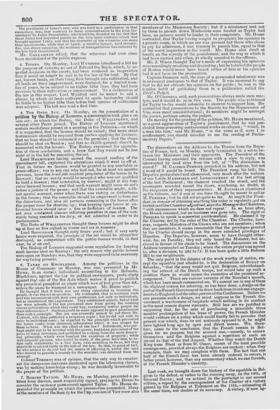 Page 8, 20 August 1831 — The discussions on the Address to the Throne from the
Close

The discussions on the Address to the Throne from the

Depu- ties of France, had, on Monday, nearly terminated in a set-to be- tween the Ministers and their opponents. The President of the Council having ascended the tribune with a view to reply, was interrupted by loud cries from the left, of "The discussion is

closed !" M. CASIMIR PERRIER persisted in his address, but not a word of it could be heard. The President rung his bell ; the Deputies gesticulated and clamoured, very much after the fashion of our Lords MANSFIELD and LONDONDERRY at the last sitting of the last Parliament ; the clamour reached the street, and the passengers crowded round the doors, wondering, no doubt, at the eloquence of their representatives. M. JOUSSELIN clambered up the tribune, and it was at one time thought he meant to collar M. PERRIER; but he did not go quite so far. At length the Presi- dent, in despair of obtaining any thing like order or regularity, put on his hat; and the Chamber adjourned, says the Messoger desChumbres, "with expressions which we dare not repeat." In an hour after, the House resumed, but no business was gone into. The right of PERRIER to speak is somewhat problematical. He claimed it by the Charter, not by the rules of the Chamber. The Charter, how- ever, respects Ministers of the Crown who are not members ; when they are members, it seems reasonable that the privileges granted by the Charter should merge in the more extended privileges of Deputies. The Deputies, however, seem to have thought other- wise, for, on Tuesday, they not only heard the Minister, but de- clared in favour of his claim to be heard. The discussions on the Address terminated on Tuesday ; when the entire projet was agreed to, after a division, by 282 to 73. It has been quite a little Reform Bill to our neighbours. The only point in the debates of the week worthy of notice, ex- cept the squabble just alluded to, is the declaration of SOULT on Saturday, "that the army would not quit Belgium, notwithstand- ing the retreat: of the Dutch troops, but would take up such a position there as would insure the execution of the promised ar- rangement." There are various versions of the Marshal's speech, which has been much commented on. We cannot see in any of them the slightest reason for inferring, as has been done, a design on the part oft he French Government to draw back from its solemn engage- ments to England and the other powers of the Conference. Before we can presume such a design, we must suppose in the French Go- vernment a wantonness of turpitude which nothing in its conduct in the most remote degree warrants. Still less are we justified in supposing that, for the sake of purchasing a miserable three months' prolongation of his lease of power, the French Minister would venture on a policy which could hardly fail to provoke that general war which, were he not zealously opposed to it, he might have lighted long ago by open and direct means. We, there- fore, come to the conclusion, that the French remain in Bel- gium for no purpose but the avowed one,—namely, to assure themselves and the Belgians against a repetition of such an inroad as that of the 2nd August. Whether they watch the Dutch King from Diest or from Sr. Omer, seems of the least possible consequence, provided alaays the Belgians are content: when they complain, then we may complain with them. The fact that one half of the French force has been already ordered to return, is better proof, however, than any commentary which we can furnish, of the French Minister's sincerity.