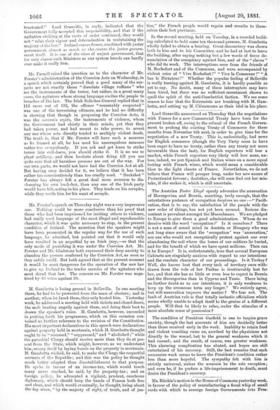 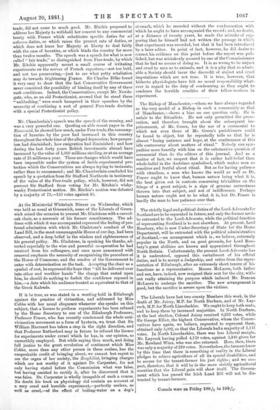 M. Ritchie's motion in the House of Commons yesterday week,

in favour of the policy of manufacturing a fiscal whip of small cords with which to scourge foreign Governments into Free- trade, did not come to much good. Mr. Ritchie proposed to address her Majesty to withhold her consent to any commercial treaty with France which substitutes specific duties for ad valorem duties, or which raises the present rate of duties, or which does not leave her Majesty at liberty to deal fairly with the case of bounties, or which binds the country for more than twelve months. The speech was a speech for what is now called "fair trade," as distinguished from Free-trade, by which Mr. Ritchie apparently meant a small course of irritating -experiments on the nerves of French exporters,—not too bold, and not too persevering,—just to see what petty retaliation may do towards frightening France. Sir Charles Nike found it very easy to show that the last Conservative Government never conceived the possibility of binding itself by any of these rash conditions. Indeed, the Conservatives, except Mr. Newde- gate, who, as an old Protectionist, avowed that he stood there -" unblushing," were much hampered in their speeches by the necessity of combining a sort of general Free-trade doctrine with a special Protectionist policy.