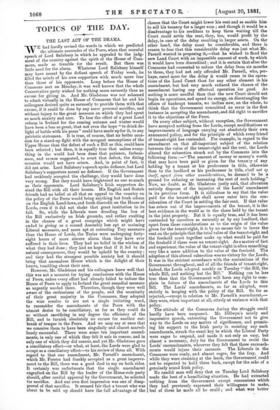 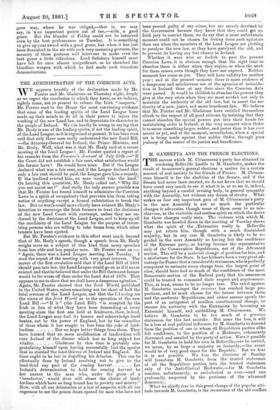 THE LAST ACT OF THE DRAMA.

WE had hardly revised the words in which we predicted the ultimate surrender of the Peers, when that scornful speech of Lord Salisbury in which he appealed to the judg- ment of the country against the spirit of the House of Com- mons, made us tremble for the result. But there was little need for the alarm. Whatever Lord Salisbury himself

may have meant by the defiant speech of Friday week, he filled the minds of his own supporters with much more fear than those of his opponents. Long before the House of Commons met on Monday, it was well known that the whole Conservative party wished for nothing more earnestly than an excuse for giving in. And Mr. Gladstone was not ashamed to admit virtually in the House of Commons that he and his colleagues desired quite as earnestly to provide them with that excuse, if it could be done by any mere personal sacrifice, and without injury to the great measure on which they had spent so much anxiety and care. To lose the effect of a great Land reform in Ireland for the coming autumn and winter would have been a loss so great, that not even the hope "to drink de- light of battle with his peers" could have made up for it, to any patriotic statesman. It is true, of course, that no better occa- sion for a stand-up fight with the arrogant assumptions of the Upper House than the defeat of such a Bill as this, could have been selected ; but then, it is equally true that unless every- thing in the world had been done that patience, forbear- ance, and reason suggested, to avert that defeat, the fitting occasion would not have arisen. And, in point of fact, it did not arise. Lord Salisbury's speech spoke defiance, but Lord Salisbury's supporters meant no defiance. If the Government had recklessly accepted the challenge, they would have done very wrong. But they would have frightened no one so much as their opponents. Lord Salisbury's Irish supporters de- sired the Bill with all their hearts. His English and Scotch friends had no belief at all that an appeal to the country on the policy of the Peers would bring anything but fresh odium on the English Land-laws, and fresh discredit on the House of Lords, even if it did not shake that great institution to its fall. So, while the Liberals were dreading the loss of the Bill exclusively on Irish grounds, and rather exulting in the chance of a great campaign which might have ended in giving us a second Assembly less apt at maiming Liberal measures, and more apt at correcting Tory measures than the House of Lords, the Tories were undergoing forty- eight hours of more sincere alarm than they have ever suffered in their lives. They had no belief in the wisdom of what they had done ; they had no hope that if it led to its natural consequences, they would be upheld by the country ; and they had the strongest possible anxiety lest it should bring that anomalous House which is the delight of their hearts, tumbling about their ears.

However, Mr. Gladstone and his colleagues knew well that this was not a moment for trying conclusions with the House of Peers, unless every effort had already failed to induce the

House of Peers to apply to Ireland the great remedial measure so urgently needed there. Therefore, though they were well

aware of the enthusiasm of the people, and the unanimity of their great majority in the Commons, they adopted the wise resolve to use not a single irritating word, to reconsider the amendments of the Peers with the utmost desire to be conciliatory, so far as they could do so without sacrificing in any degree the efficiency of the Bill, and to furnish absolutely no excuse for another out- break of temper in the Peers. And we may say at once that we conceive them to have been singularly and almost marvel- lously successful. There were some ten important amend- ments, in only one of which they felt it safe to concur, and in only one of which they did concur, and yet Mr. Gladstone gave a conciliatory effect—or what, at least, the Lords were glad to accept as a conciliatory effect—to his review of them all. With regard to that one amendment, Mr. Parnell's amendment, which Mr. Forster had frankly accepted as a great improve- ment to the Bill, there was a good deal to say on both sides. It certainly was unfortunate that the single amendment

engrafted on the Bill by the leader of the Home-rule party should, after cordial approval by the Government, be selected for sacrifice. And our own first impression was one of disap- proval of that sacrifice. It seemed fair that a -tenant who was about to be sold up should have the full advantage of the

chance that the Court might lower his rent and so enable him to sell his tenancy for a larger sum ; and though it would be a disadvantage to his creditors to keep them waiting till the Court could settle the rent, they, too, would profit by the delay, in case of the delay resulting in larger assets. On the other hand, the delay must be considerable, and there is reason to fear that this considerable delay was just what Mr. Parnell wanted in proposing it,—that he wished to flood the new Land Court with an impossible amount of work, by which it would have been discredited ; and it is certain that after the Commons had consented to reduce the delay from six months to three, they had not only offended Mr. Parnell, who, per- haps, cared more for the delay it would cause in the opera- tions of the Land Court than for any other element in his amendment, but had very much reduced the chance of the amendment having any effectual operation for good. As nothing is more needful than that the new Court should not begin its operations, and spend its energy, on disentangling the affairs of bankrupt tenants, we incline now, on the whole, to think that the Government committed an error in the first instance in accepting the amendment, and did right to sacrifice it to the objections of the Peers.

On every other subject, without exception, the Government have accepted nothing from the Lords, except modifications or improvements of language carrying out absolutely their own announced policy, and for the principle of which every friend of tenant-right has contended. For example, in regard to the amendment on that all-important subject of the relation between the value of the tenant-right and the rent, the Lords altered the subsection struck out by the Commons into the following form :—" The amount of money or money's worth that may have been paid or given for the tenancy of any holding by a tenant or his predecessor in title, otherwise than to the landlord or his predecessor in title, shall not oy itself, apart from other considerations, be deemed to be a ground for reducing or increasing the rent of such holding.* Now, no doubt, as Mr. Gladstone justly said, that alteration entirely disposes of the injustice of the Lords' amendment in its previous form. It is ridiculous to say that the value paid for the tenant-right shall never enter into the con- sideration of the Court in settling the fair rent. If that value has arisen out of the improvements of the tenant, it is the best evidence in the world as to the share held by the tenant in the joint property. But it is equally true, and it has been contended by ourselves as earnestly as by any landlord, that apart from these considerations as to the origin of the value given for the tenant-right, it is by no means fair to lower the. rent on the principle that the total value of the tenant-right and the freehold must together make up what would be paid for the freehold if there were no tenant-right. As a matter of fact and experience, the value of the tenant-right is often something very like a mere addition to the value of the freehold. The adoption of this altered subsection was no victory for the Lords.. It was in the strictest accordance with the contentions of the Government throughout, and of all the friends of tenant-right. Indeed, the Lords adopted meekly on Tuesday "the Bill, the whole Bill, and nothing but the Bill." Nothing can be less

Bill. The Lords' amendments, so far, as adopted, were strictly in keeping with the policy of the Bill. So far as rejected,—except in relation to Mr. Parnell's amendment,— they were, when important at all, utterly at variance with that policy.

The attitude of the Commons during the struggle could hardly have been surpassed. Mr. Dillwyn's manly and impressive speech, entreating the Government not to give way to the Lords on any matter of significance, and promis- ing his support to the Irish party in resisting any such amendments, struck the exact key to which the Liberal Party were eager to respond, and made it not only an easy, but almost a necessary, duty for the Government to resist the Lords' encroachments, wherever they felt that those encroach- ments would injure their measure. The Liberals in the Commons were ready, and almost eager, for the fray. And while they were straining at the leash, the Government' could not be expected to hold them back, except for the ¨ of a genuinely sound Irish policy. No candid man will deny that on Tuesday Lord Salisbury made the best of a humiliating situation. He had extracted

nothing from the Government except concessions which they had previously expressed their willingness to make, but of these he made all he could ; and what was better

gave way, where he was obliged,—that is, we may say, in n'ne important points out of ten,—with, a good grace. But the blunder of Friday could not be retrieved even by the best performance on Tuesday. It is something to give up your sword with a good grace, but when it has just been flourished in the air with such very menacing gestures, the memory of those gestures will intervene to make even the best grace a little ridiculous. Lord Salisbury himself must have felt for once almost insignificant, as he sheathed the bloodless weapon with which he had made such truculent demonstrations.