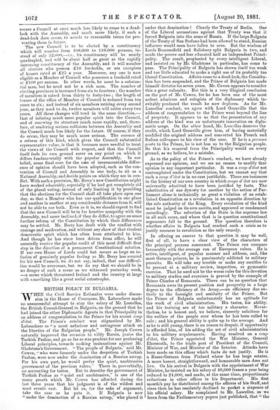 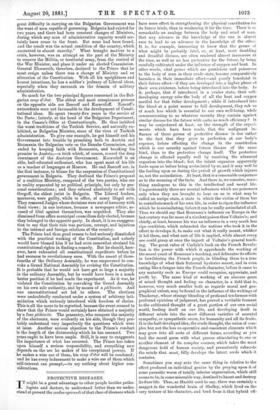 WHEN the Civil Service Estimates were under discus- sion in the House of Commons, Mr. Labouchere made an unsuccessful attempt to stop the salary of Mr. Lascelles, the British Consul-General in Bulgaria, on the ground that he had joined the other Diplomatic Agents in that Principality in an address of congratulation to the Prince for his recent coup d'itat. The Prince's conduct was stigmatised by Mr. Labouchere as "a most nefarious and outrageous attack on the liberties of the Bulgarian people." Mr. Joseph Cowen naturally improved the occasion to vilify Russia, praise the Turkish Pashas, and go as far as was prudent for one professing Liberal principles, towards making insinuations against Mr. Gladstone's Government.. "The people of Bulgaria," said Mr. Cowen, "who were formerly under the despotism of Turkish Pashas, were now under the domination of a Russian satrap. For his own part, he would prefer the quiet, unobtrusive government of the previous rulers." There is, proverbially, no accounting for tastes. But to describe the government of Turkish Pashas as "quiet and unobtrusive," is one of the many proofs which Mr. Cowen has afforded during the last three years that his judgment is of the wildest and most erratic cast. But let us, for the sake of argument,

take the case as he puts it. If Bulgaria is now "under the domination of a Russian satrap," who placed it

under that domination ? Clearly the Treaty of Berlin. One of the Liberal accusations against that Treaty was that it forced Bulgaria into the arms of Russia. If the large Bulgaria of the Treaty of San Stefano had been allowed to stand, Russian influence would soon have fallen to zero. But the wisdom of Lords Beaconsfield and Salisbury split Bulgaria in two, and made the poorer and less educated half an independent Princi- pality. The result, prophesied by every intelligent Liberal, and insisted on by Mr. Gladstone in particular, has come to pass. The Principality of Bulgaria has shown itself too weak and too little educated to make a right use of its probably too liberal Constitution. Affairs came to a dead-lock, the Constitu- tion has been suspended, and the Prince of Bulgaria has made himself dictator for seven years. Mr. Cowen appears to consider this a great calamity. But this is a very illogical conclusion on the part of Mr. Cowen, for he has been one of the most ardent admirers and eulogists of the diplomacy which in- evitably produced the result he now deplores. As for Mr. Lascelles' conduct, we agree with Lord Granville that the address of congratulation to the Prince went beyond the line of propriety. It appears to us that the presentation of any address of the kind was an unfortunate innovation on diplo- matic usage. On the other hand, Mr. Lascalles deserves the credit, which Lord Granville gives him, of having materially modified the original address and converted his French and Italian colleagues to his view of the case. If he is a persona grata to the Prince, he is not less so to the Bulgarian people. So that his removal from the Principality would on every ground, as we believe, be a mistake.

As to the policy of the Prince's conduct, we have already expressed our opinion, and we see no reason to modify that opinion in any important particular. It was a coup critat not contemplated under the Constitution, but we cannot say that such a coup d'etat is in no case justifiable. There are instances in the history of our own country in which coups d'itat are now universally admitted to have been justified by facts. The substitution of one dynasty for another by the action of Par- liament alone is technically as great a violation of an estab- lished Constitution as a revolution in an opposite direction by the sole authority of the King. Every revolution of the kind must be judged on its own merits, and approved or condemned accordingly. The salvation of the State is the supreme law- in all such cases, and where that is in question constitutional arguments fall to the ground. The question therefore is whether affairs in Bulgaria had reached such a crisis as to justify recourse to revolution as the only remedy.

In offering an answer to that question it may be well, first of all, to have a clear view of the characters of the principal persons concerned. The Prince can compare favourably with the average run of European rulers. He is active, intelligent, of popular manner and address, and, like most German princes, he is passionately addicted to military pursuits. He will take any trouble or make any sacrifice to be present at a military review, inspection, or gymnastic exercise. That he need not be the worse ruler for this devotion to military studies and exercises is proved by the example of Prince Charles of Roumania. There can be no question that Roumania owes its present position and prosperity in a large degree to the efficiency of its Army,—an efficiency due en- tirely to the foresight and assiduity of the Prince. But the Prince of Bulgaria unfortunately has no aptitude for the work of civil administration. His tastes, his ability, and his training are of too military a character. Never- theless, he is honest and, we believe, sincerely solicitous for the welfare of the people over whom he has been called to rule ; and his general ability is quite up to the average. And as he is still young, there is no reason to despair, if opportunity is afforded him, of his adding the art of civil administration to his military acquirements. Having resolved on a coup d'e'tat, the Prince appointed the War Minister, General Ehrenroth, to the triple post of President of the Council, Minister of War, and Minister of the Interior. Attacks have been made on this officer which facts do not justify. He is a Russo-German from Finland where he has large estates. A more honest, straightforward, and honourable 'man does not live. On his arrival in Bulgaria with the appointment of War Minister, he insisted on his salary of 40,000 francs a year being reduced to 24,000, and made, at the same time, proportionate reductions in other offices in his Department. His first month's pay he distributed among the officers of his Staff, and since then he has resolutely declined to pocket a sixpence of his official salary. He complained to Mr. Lascelles, as we learn from the Parliamentary papers just published, that "the

great difficulty in carrying on the Bulgarian Government was the want of men capable of governing. Bulgaria had existed for two years, and there had been constant changes of Ministers, during which any man of administrative capacity would cer- tainly have come to the front. But none had been found, and the result was the actual condition of the country, which amounted to almost anarchy." What brought matters to a crisis, however, was an attempt on the part of the Ministry to remove the Militia, or territorial army, from the control of the War Minister, and place it under an elected Commission. General Ehrenroth, therefore, declared to the Prince that he must resign unless there was a change of Ministry and an , alteration of the Constitution. With all his uprightness and honest intentions, he has a soldier's jealousy of Liberal ideas, 'especially when they encroach on the domain of military administration.

So much for the two principal figures concerned in the Bul- garian coup d'e?at. The ablest and most conspicuous persons on the opposite side are Zancoff and Karaveloff. Zancoffs antecedents were not favourable to the development of Consti- tutional ideas. He spent twenty-five years in the service of the Porte ; latterly, at the head of the Bulgarian Department, in the Censor's Office at Constantinople. He thus imbibed the worst traditions of the Turkish Service, and naturally ex- hibited, as Bulgarian Minister, some of the vices of Turkish administration. To give one example, he got himself and his Government into trouble by promising both to Austria and Roumania the Bulgarian vote on the Danube Commission, and ended by keeping faith with Roumania, and breaking his promise to Austria,—a trick which, of course, roused the deep resentment of the Austrian Government. Karaveloff is an able, half-educated enthusiast, who has spent most of his life as a teacher of languages at Moscow. He and Zancoff are, in the first instance, to blame for the suspension of Constitutional government in Bulgaria. They declined the Prince's proposal of a coalition Ministry, composed of the two parties who are in reality separated by no political principle, but only by per- sonal considerations ; and they refused absolutely to act with Gregoff, the ablest jurist in Bulgaria. The Liberal leaders, moreover, were guilty, while in office, of many illegal acts. They removed Judges whose decisions were out of harmony with their views ; in one instance, because a newspaper editor, ac- cused of libel against themselves, was acquitted. They also

• dismissed from office municipal councillors duly elected, because • they belonged to the opposite party. In short, it is no exaggera- tion to say that their rule was partisan, corrupt, and injurious to the internal and foreign relations of the country.

The Prince had thus good reason to feel seriously dissatisfied with the practical working of the Constitution, and nobody would have blamed him if he had even somewhat strained his constitutional rights in finding a remedy. But he should, how- ever, have exhausted all constitutional expedients before he had recourse to revolutionary ones. With the assent of three- fourths of the Ordinary Assembly, he was empowered to con- voke a Grand National Assembly for revising the Constitution. It is probable that he would not have got so large a majority .in the ordinary Assembly, but he would have been in a much better position if he had made the experiment. As it was, he violated the Constitution by convoking the Grand Assembly on his own sole authority, and by means of a plebiscite. And one unconstitutional act led to others. The elections were undoubtedly conducted under a system of arbitrary inti- midation which seriously interfered with freedom of choice. This is all the more to be regretted, because the event seemed to show that the Prince would certainly have obtained a majority , by a free plebiscite. The peasantry, who compose the majority of the electorate, were evidently on his side, though they pro- bably understood very imperfectly the questions which were at issue. Another serious objection to the Prince's conduct is the length of the dictatorship which he has assumed. Two years ought to have been ample. Still, it is easy to exaggerate the importance of what has occurred. The Prince has taken lupon himself a serious responsibility, and everything now depends on the use he makes of his exceptional powers. If he makes a wise use of them, his coup d'itat will be condoned; and he has every inducement to make a wise use of them which "self-interest can prompt,—to say nothing about higher con-