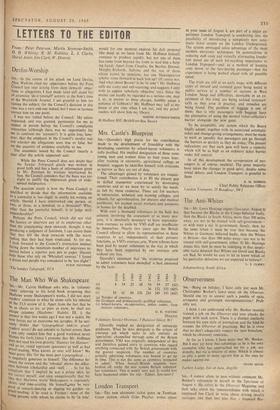 The Man , Who Was Shakespeare SIR. —Mr. Calvin Hoffman asks why,

in 'calumni- ously' referring to his lurid book proposing that Marlowe wrote Shakespeare's works. I did not draw readers' attention to what he alone calls his rebuttal of the TLS review of it. Apart from the fact that be he as chaste as ice, as pure as snow, he shall not escape calumny (Marlowe: Habilet, Ill, i), the answer is that two weeks ago I was not a sadist. He now forces me to overcome my scruples. If he seri- ously thinks that 'typographical and/or proof- readers' errors' do not amount to factual errors, then ! can only remind him that a good workman never °lames his fools (since I presume that Mr. Hoffman does not read his own proofs). 'Hamner for Hamner,' QM so on, could represent ignorance as well as bad Proof-reading. Who knows or ever will know? We must guess. His 'for the most part typographical . . is singularly generous to himself. The difference be- tween the review and the 'rebuttal' shows the differ- ence between scholarship and—well . . . As for his complaint that I implied he was a prime idiot, let the correct myself, and state unequivocally that his Idea that Marlowe wrote Shakespeare is supremely Idiotic and time-wasting. He himself%may be very good at cossack-dancing or digging his garden -"or proof-reading, if he tried it. Further: none of the living Persons with whom he claims to be 'in tune'

would for one moment endorse his daft proposal (the dead, as we learn from Mr. Hoffman himself, continue to produce rapidly, but not one of them has come from beyond the tomb to lend him a help- ing hand). Apart from Chaplin, the Beatles, Hoover, Morph Richards. Sabrina and the rest of those whose names he mentions. has one Shakespearian scholar come forward to back him up? Of course not. And what about Bacon? Is he 'in tune'? Mr. Hoffman calls me cocky and self-vaunting, and suggests I only wish to appear 'scholarly objective' (sic). Since the matter can hardly be regarded as a serious one, may 1, sir, in answer to these charges, humbly adapt a sentence of Gibbon's? Mr. Hoffman may call at" my house at any time when I am out, and my proof- readers will show him my library.