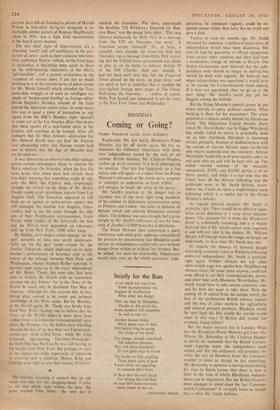 Predictably, Mr. Ian Smith. Rhodesia's Prime Minister, has let off steam again. He has to, whenever his followers' impatience with delay over independence roused by the visit of yet another British minister, Mr. Cledwyn Hughes, pushes up party pressure to a level endangering his position. That this has happened—as it has before and will again--is evident from the Prime Minister's references at the recent party congress to 'attempts to undermine us from within . . . evil intrigue to break the unity of the party.'

Mr. Smith's reaction to the danger was to translate two of the most right wing members of his cabinet to diplomatic representative posts in Pretoria and Lisbon—the latter in defiance of Britain, which still controls Rhodesian external affairs. The defiance was easy enough, but a great delight to Mr. Smith's followers, as was his ban- ning of Zambia's UN1P branches in Rhodesia.

The Prime Minister then summoned a party conference and amid great applause consolidated his position by proclaiming that Rhodesia could declare its independence unilaterally now without danger from within or without her borders. But, he added, 'we must be responsible. Impetuosity would only mess up the whole operation.' hide- pendence, he continued vaguely, could be ex- pected sooner rather than later, but he could not give a date.

Twelve or even six months ago. Mr. Smith informed his audience a unilateral declaration of independence would have been disastrous. But now he, had the guarantee of official recognition . from certain other countries and there had been a tremendous change of attitude in Britain. The British Government now believed that the inde- pendence issue should no longer be shelved but should be dealt with urgently. He believed that when independence was negotiated it would have tc be outside the Commonwealth (loud cheers). if it were not negotiated, then we go on to the next thing'--Mr. Smith's usual pep pill for flaggers among the faithful.

But the Prime Minister's speech cannot be put down entirely' to party political cajolery. What backing is .there for his statements? The white population is almost solidly behind the Rhodesian Front. The Opposition United Peoples Party which Mr. David Butler vice Sir Edgar Whitehead has totally failed to revive is practically dead on its feet. European liberalism is becoming extinct, primarily because of disillusionment with the actions of various African states (ex-British and others) scattered over the continent. African Nationalist leadership is of poor quality and is in any case shut up and will be kept shut up. The exiled second echelon of the mutually antagonistic ZAPU and ZANU parties is of no better quality, and while it is not true that the Chiefs have all the African following and the politicians none, as Mr. Smith believes, never- theless the Chiefs do have a traditionalist rural following which is a useful aid to the Prime Minister's policies.

As regards internal security, Mr. Smith is probably right. There would be no effective oppo- sition inside Rhodesia tc a coup d'etat indepen- dence. The pressure for it from the Rhodesian Front is continually mounting and it is widely believed that if Mr. Smith cannot soon negotiate it and will not take it, his deputy, Mr. William Harper will emerge from the wings, no longer an understudy, to dare what Mr. Smith dare not.

As regards the absence of external danger (excluding economic risks) to Rhodesia following unilateral independence, Mr. Smith is probably right again. Neither African nor any other states would wage war against him. Neighbouring African states, for some years anyway, could not even afford to cut their communications, power, and other links with Rhodesia. Nevertheless, Mr. Smith would have to take serious economic risks and he does not want to take them. With the cutting off of capital from the outside world, the loss of the preferential British tobacco market and the loss of other markets for agricultural and mineral primary products, Rhodesia would be very hard hit. But would the outside world react in this way? If Britain did, would, for example, Japan follow?

But the major mystery lies in London. What has the Rhodesian Prime Minister got from Mr. Wilson, Mr. Bottomley or Mr. Cledwyn Hughes to justify his statement that the British Govern- ment urgently wants the independence issue settled and that the settlement will probably in- volve the exit of Rhodesia from the Common- wealth? It looks as though he has something. Mr. Bottomley is reported as having stated during his visit to Sierra Leone that there is now a limit to the time in which Rhodesian Indepen- dence can be negotiated. Has the British Govern- ment changed its mind since the last Common- wealth Conference? It certainly looks as though this is what Mr. Smith believes.