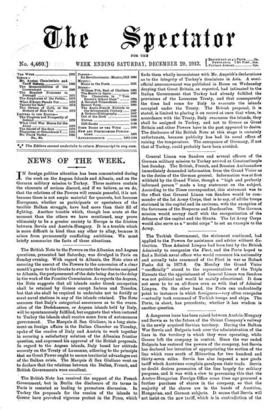 General Liman von Sanders and several officers of the German

military mission to Turkey arrived at Constantinople last Sunday. The British, French, and Russian Ambassadors immediately demanded information from the Grand Vizier as to the duties of the German general. Information was at first withheld by the Grand Vizier, though a " high and perfectly informed person " made a long statement on the subject. According to the Times correspondent, this statement was to the effect that General Liman von Sanders would be com- mander of the 1st Army Corps, that is to say, of all the troops stationed in the capital and its environs, with the exception of the fortresses of the Bosporus and Dardanelles. The German mission would occupy itself with the reorganization of the defences of the capital and the Straits. The 1st Army Corps would also serve as a " model corps " to set an example to the Army.