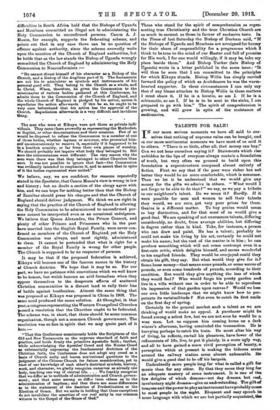 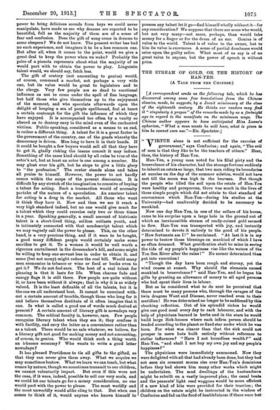 TN our more serious moments we have all said to our- selves that nothing of supreme value can be bought, and in our more sentimental moments we have most of us said it to others. " There is so little, after all, that money can buy?'

of truth, but very often we proceed to build upon this foundation a superstructure composed almost entirely of fiction. First we say that if the poor were richer but not better they would be no more comfortable, which is nonsense. Then we let it be understood that we would give any money for the gifts we admire in others. " What would I not forgo to be able to do that ?" we say, as we pay a tribute to our neighbour's talent. Do we mean it ? Hardly. If it were possible for men and women to sell their talents they would, we are sure, get very poor prices for them. Genius is a different matter. To buy genius would mean to buy distinction, and for that most of us would give a good deal. We are speaking of not uncommon talents, differing considerably, no doubt, from average abilities, but differing in degree rather than in kind. Take, for instance, a person who can draw and paint. He has a talent; probably he could not make his living by his art, certainly he could not make his name; but the root of the matter is in him ; he can produce something which will not rouse contempt even in a first-rate critic, which delights himself, and seems wonderful to his ungifted friends. They would be overjoyed could they obtain his gift. they say. But what would they give for it? Some loose money—that means some pounds, or some scores of pounds, or even some hundreds of pounds, according to their condition. Bnt would they give anything the loss of which they would feel ? Who would forgo his pretty garden and live in a villa without one in order to he able to reproduce his impression of that garden upon canvas ? Would we lose our own little landscape that we might know how to per- petuate its verisimilitude P Not even to catch its first smile on the first day of spring.

Certainly to the general market such a talent as we are thinking of would make no appeal. A purchaser might be found among a select few, but we are not sure he would be a wise man. Let us suppose him coming home on a dark winter's afternoon, having concluded the transaction. He is hurrying perhaps to catch his train. He must alter his way of living, he reflects, curtail his pleasures, have fewer of the refinements of life, live, to put it plainly, in a more ugly way, and all to have gained a more vivid perception of beauty, a perception which at present is making the hideous scene around the railway station seem almost unbearable. Ho would give a good deal to be off his bargain.

Undoubtedly more people long for what is called a gift for music than for any other. By that they mean they long for an adequate mastery of some instrument. It is one of the few delights of which dreams—not day dreams. but real, involuntary night dreams—give us understanding. The giftof tongues and the power to play an instrument have probably come to most people in the night. Eloquent and easy speech in some language with which we arc but partially acquainted„tho power to bring delicious sounds from keys we could never manipulate, have made us see why dreams are reported to be beautiful, full as the majority of them are of a sense of fear and confusion. Does the gift of song come in dreams to some sleepers ? We do not know. The present writer has had no such experience, and imagines it to be a less common one. But after all, when it comes to the point, would we give a great deal to keep the power when we wake ? Probably the price of a pianola represents about what the majority of us would part with to obtain the power to play. Linguistic talent would, we should say, fetch less.

The gift of oratory (not amounting to genius) would, of course, command a market, not perhaps a very wide one, but its value would be great to legislators and to the clergy. Very few people are so dead to emotional influence as not to come under the spell of fine language. but half those who give themselves up to the enjoyment of the moment, and who speculate afterwards upon the delight of keeping a sea of people spellbound, feel at heart a certain contempt for the gift the influence of which they have enjoyed. It is accompanied too often by a vanity so absurd as to destroy envy in the mind even of the enchanted victims. Public speaking, considered as a means to an end, is rather a different thing. A talent for it is a great factor in the government of the country, one of the goads whereby the democracy is driven. Men long to have it in their hands. If it could be bought a few buyers would sell all that they have to get it, gladly risking the insane conceit it may induce. Something of the same kind should by all rules be true of the actor's art, but at least an actor is one among a number. He may gloat over his gift, but he stops to give a little glory to " the profession." The orator stands alone and takes all praise to himself. However, the power to act hardly comes within the scope of the present discussion. It is difficult by any stretch of the imagination to conceive of buying a talent for acting. Such a transaction would of necessity partake of the nature of a speculation. An amateur talent for acting is a drug in the market. All those who want it think they have it. Now and then we see it reach a very high standard indeed, but no one would give much for a talent which they could exercise only two or three times in a year. Speaking generally, a small amount of histrionic talent is a short-lived thing, seldom outlasts youth, and is intimately connected with that nondescript talent which we may vaguely call the power to please. This, on the other hand, is a very precious thing, and if it were to be bought, a good many diffident people would certainly make some sacrifice to get it. To a woman it would be well worth a rigorous curtailment in the dressmaker's bill, and some might be willing to keep one servant less in order to obtain it, and some (but not many) might reduce the coal bilL Would many men economize in tobacco or wine or food or books even to get it P We do not feel sure. The best of a real talent for pleasing is that it lasts for life. When charms fade and energy flags it is still there. Few people are quite without it, or have been without it always ; that is why it is so widely valued, It is the least definable of all the talents, but it is the one we all understand best. It cannot be exercised with- out a certain amount of trouble, though those who long for it and believe themselves destitute of it often imagine that it can. Is what is called a good use of words much desired at present P A certain amount of literary gift is nowadays very common. The critical faculty is, however, rare. Few people recognize literary talent when they see it; they confuse it with facility, and envy the latter as a convenience rather than as a talent. There would be no sale whatever, we believe, for a literary gift not good for making money and not amounting, of course, to genius. Who would think such a thing worth an irksome economy ? Who wants to write a good letter nowadays ?

It has pleased Providence to tie all gifts to the gifted, so that they can never give them away. What we acquire we may sometimes bestow. What we learn we can teach, but what comes by nature, though we sometimes transmit to our children, we cannot voluntarily impart. But even if this were not the case, if it were, indeed, possible to sell our very souls, and we could let our talents go for a money consideration, no one would part with the power to please. The most worldly and the most unworldly would alike cling to that. But when one comes to think of it, would anyone who knows himself to possess any talent let it go—find himself wholly without it—for any consideration ? We suppose that there are some who would, but not very many—not more, perhaps, than would take money for a finger or for the drum of an ear. Genius is of value to the world. Talent is of value to the owner, but to him its value is enormous. A sense of partial dumbness would seize upon the guilty seller. What most of us say is of no great value to anyone, but the power of speech is without price.