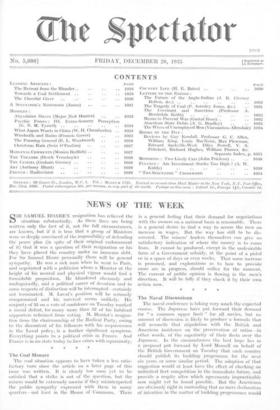 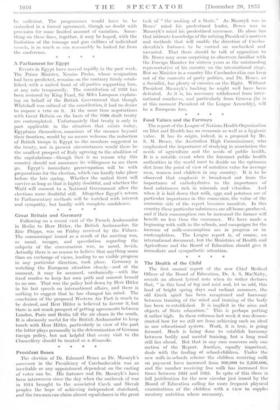 Page 1, 20 December 1935 — The Naval Discussions The naval conference is taking very much
Close

The Naval Discussions The naval conference is taking very much

the expected course. The Japanese have put forward their demand for " a common upper limit " for all navies, but no amount of discussion is likely to produce a formula that will reconcile that stipulation with the British and American insistence on the preservation of ratios—in other words, of the superiority of their fleets over the Japanese. In the circumstances the best hope lies in a proposal put forward by Lord Monsell on behalf of the British Government on Tuesday that each country should publish its building programme for the next six years or some similar period. The adoption of that suggestion would at least have the effect of checking an unlimited fleet competition in the immediate future, and provide a respite after which agreements impracticable now might yet be found possible. But the Americans arc obviously right in contending that no mere declaration of intention in the matter of building programmes would be sufficient. The programmes would have to be embodied in a formal agreement, though no doubt with provision for some limited amount of variation. Some- thing on these lines, together, it may be hoped, with the limitation of the tonnage and gun calibres of individual vessels, is as much as can reasonably be looked for from the conference.