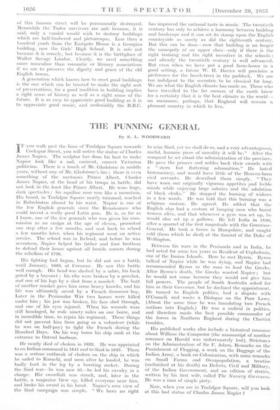 IF you walk past the lions of Trafalgar Square towards Cockspur Street, you will notice the statue of Charles James Napier. The sculptor has done his best to make Napier look like a sad, eminent, correct Victorian. politician. There is a touch of Mr. Gladstone in middle years, without any of Mr. Gladstone's fire ; there is even something of the unctuous Prince Albert. Charles James Napier, at the head of his troops in battle, did not look in the least like Prince Albert. He wore huge, dark spectacles ; his aquiline nose rose like a mountain: Ilis beard, in Trafalgar Square neatly trimmed, reached in Baluchistan almost to his waist. Napier is one of the few English generals since the Renaissance who could invent a really good Latin pun. He is, as far as I know, one of the few generals who was given his com- mission as an ensign at the age of eleven, promoted one step after a few months, and sent back to school a few months later, when his regiment went on active service. The school was in Ireland, and before he was seventeen, Napier helped his father and four brothers to defend their house against all hostile corners during the rebellion of 1798.

His fighting had begun, but he did not see a battle until January, 1809, at Corunna. He saw this battle well enough. His head was slashed by a sabre, his back gored by a bayonet ; his ribs were broken by a gunshot, and one of his legs by a shot from a musket. The butt of another musket gave him some heavy knocks, and his life was ultimately saved by a French drummer boy. Later in the Peninsular War two horses were killed under him ; his jaw was broken, his face shot through, and one of his eyes injured. When his wounds were still bandaged, he rode ninety miles on one horse, and in incredible time, to rejoin his regiment. These things did not prevent him from going as a volunteer (while lie was on half-pay) to fight the French during the Hundred Days. On his way home his ship sank at the entrance to Ostend harbour.

He nearly died of cholera in 1833. He was appointed to an Indian command in 1841 and to Sind in 1842. There was a serious outbreak of cholera on the ship in which he sailed to Karachi, and soon after he landed, he was badly hurt in the leg by a bursting rocket. During the Sind war—he was now 61—he led his cavalry in a charge. His' swordhilt was struck, and, later in the battle, a magazine blew up, killed everyone near him, and broke his sword in his hand. Napier's own view of the Sind campaign was simple. " We have no right to seize Sind, yet we shall do so, and a very advantageous, useful, humane piece of rascality it will be." After the conquest he set about the administration of the province. He gave the princes and nobles back their swords with a " stern but flattering admonition." He hated bureaucracy, and would have little of the Heaven-born civil servants. He described them simply. " They have worn out originally vigorous appetites and feeble minds while enjoying large salaries and the adulation of black clerks." He stopped the burning of widows in a few words. He was told that this burning was a religious custom. He agreed. He added that the English also had a custom of hanging men who burnt women alive, and that whenever a pyre was set up, he would also set up a gallows. He left India in 1850, after a quarrel of the first magnitude with the Governor- General. He took a house in Hampshire, and caught cold (from which he died) at the funeral of the Duke of Wellington.

Between his wars in the Peninsula and in India, he had acted for some ten years as Resident of Cephalonia, one of the Ionian Islands. Here he met Byron. Byron talked of Napier while he was dying, and Napier had recommended Byron as the man to lead the Greeks. After Byron's death, the Greeks wanted Napier ; but he would not come because they would not give him full powers. The people of South Australia asked for him as their Governor, but he declined the appointment. He turned to English politics, had a dispute with O'Connell, and wrote a Dialogue on the Poor . Laws. (About the same time he was translating two French authors into English.) He was a radical in polities,. and therefore made the best possible commander of the forces in Northern England during the Chartist troubles.

• His published works also include a historical romance about William the Conqueror (the manuscript of another romance on Harold was unfortunately lost), Strictures' on the Administration of Sir F. Adam, Remarks on the. Punishment of Flogging, a work on the Baggage of the' Indian Army, a book on Colonisation, with some remarks on Small Farms and Overpopulation, a treatise (unfinished at his death) on Defects, Civil and Military, of the Indian Government, and an edition of stories, written by his first wife, called The Nursery Governess. He was a man of simple piety.

Now, when you are in Trafalgar Square, will you look at this bad statue of Charles James Napier ?