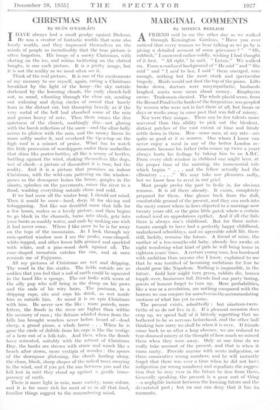 By SEAN O'FAOLAIN IHAVE always had a small grudge against Dickens. He was a creator of fantastic worlds that were also lovely worlds, and they impressed themselves on the . minds of people so ineradicably that the true picture is often forgotten. His image of a snowy Christmas, with skating on the ice, and robins twittering on the clotted boughs, is one such picture. It is a pretty image, but it is not the reality as we most often see it.

Think of the real picture. It is one of the excitements of my memory to see myself, again, eating a Christmas breakfast by the light of the lamp—the sky outside darkened by the lowering clouds, the early church-bell not, as usual, vibrating through the clear air, sending out widening and dying circles of sound that barely hum in the distant ear, but thumping heavily as if the very metal of the bell had absorbed some of the rain and grown heavy of note. Then there comes the dim quietness of the church, soothingly dim—not glaring with the harsh reflection of the snow—and the altar-holly seems to glisten with the rain, and the snowy linens lie more softly under it, and overhead the tip-a-tap on the high roof is a minuet of praise. What fun to watch the little procession of worshippers under their umbrellas• that shine like porter-bottles, all like a scurry of beetles, battling against the wind, shaking themselves like dogs, wet of cheek—a picture of discomfort it is true, but the reality. And it is a picture that promises an indoor Christmas, with the wild-cats pattering on the window- panes as the downpour lashes the house, gurgles in the shoots, splashes on the pavements, raises the river to a, flood, washing everything outside clean and cold.

If we had snow all the winter long, I should not mind. Then it would be snow—hard, deep, fit for ski-ing and tobogganing. Not like our deceitful snow that falls for a few hours, makes us a lovely picture,• and then begins to go black. in the channels, turns into slush, gets into your boots as muddy water, and ends by making one wish it had never come. Where I like snow to be is far away on the tops of the mountains, As I look through my min-spotted window now I see the peaks, cone-shaped, white-topped, and other lower hills grained and speckled with white, and a pine-wood dark against all. The cone-shaped mountain catches the sun, and at once reminds me of Fujiyama.

All my pictures of Christmas are wet and dripping. The wood in the fire sizzles. The fields outside are so sodden that you feel that a sod of earth could be squeezed in the hand like a sponge. The cat looks with scorn at the silly pup who will bring in the damp on his paws and the ends of his wiry hairs. The postman, in a dripping cape, sits and sups his drink, as wet inside him as outside him. As usual it is an epic Christmas with him. He never saw the like : more parcels, more letters, the floods in the river are higher than within the memory of man ; the flotsam whirled clown from the hills has brought wonders never before heard of—dead sheep, a grand piano, a whole house . . . When he is gone the circle of dribble from his cape is like the vestige of a hero out of a folk-tale. And then, when the floods have retreated, suitably with the retreat of Christmas. Day, the banks are strewn with straw and wrack like a beach after storm, more vcstigia of wonder : the spears of the downpour glistening, the clouds hurling along, the clean, black, sharp shapes of the naked trees swaying in the wind, and if you get the sun between you and the hill lost in mist they stand up against a gentle trans- parency of earth.

There is more light in rain, more variety, more colour, and it is far more rich for most of us in all that fond, familiar things suggest to the remembering mind.