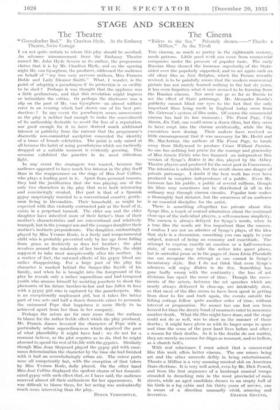 "Riders to the Sea." Privately shown.—" Thanks a Million." At the Tivoli

TuE cinema, as much as poetry in the eighteenth century, needs patrons. Little good work can come from commercial companies under the pressure of popular taste. The early Russian films showed the immense superiority of the State- aided over the popularly supported, and to see again such an old silent film • as New Babylon,. which the Forum recently revived, is to be painfully aware that the modern commercial picture has not merely learned nothing in the last six years, it has even forgotten what it once seemed to be learning from the Russian cinema. Nor need one go as far as Russia to see the effect of State patronage. Mr. Alexander Korda's publicity cannot blind our eyes to the fact that the only important films being made in England today come from Mr. Grierson's system of film units. Of course the commercial cinema has had its fine moments : The Front Page, City Streets, En Natt, one could name a dozen films, but they seem to have crept into the cinema accidentally, while the big executives were dozing. Their makers have received so little encouragement that it was necessary for Mr. Hecht and Mr. MacArthur, the authors of The Front Page, to break away from Hollywood to produce Crime Without Passion. So one has nothing but praise for the courage and generosity of Miss Gracie Fields who has financed an independent film version of Synge's Riders to the Sea, played by the Abbey Theatre players and produced for the most part in Connemara. The intention is admirable, but the result shows one danger of private patronage. I doubt if the best work has ever been produced in complete independence of a public. Even Mr. Grierson has his public, a public of several millions, though his films may sometimes not be distributed at all in the ordinary way through cinema circuits. Popular taste makes a thoroughly bad dictator, but the awareness of an audience is an essential discipline for the artist.

There is something altogether too private about this Synge film, a touch of mutual admiration about the continual close-ups of the individual players, a self-conscious simplicity. The camera is always delayed for Synge's words, when in a true film the words are less important than the camera. I confess I am not an admirer of Synge's plays, of the idea that style is a decoration, something you can apply to your subject, instead of being an economy and exactitude. The attempt to express exactly an emotion or a half-conscious state, of course, may take the writer into queer places, but in surrealist prose or in the pages of Anna Livia Plurabelle one can recognise the attempt as one • cannot in Synge's incantatory style. But I do not think that even Synge's admirers will enjoy Riders to the Sea. Something has gone badly wrong with the continuity ; the loss of act divisions has upset the sense of time. Though the move- ments of the actors, between the set speeches which are nearly always delivered in close-up, are intolerably slow, so that most of the film seems to have been 'spent in getting from door to fire and back again, the events outside the fishing cottage follow quite another order of time; . without interval or preparation. No sooner has one lost son been keened for than the dreary band of mourners enter to announce. another death. What the film might have done, and the stage could not do so well, was to show us the manner of those deaths ; it might have given us with its larger scope in space and time the sense of the poor hard lives before and after : a reason for their deaths. As it is the deaths do not matter, they are merely an excuse for dirges as resonant, and as hollow, as a church bell's.

With real reluctance I . must admit that a commercial film this week offers better cinema. The one misses being art and the other succeeds deftly in being entertainment. Thanks a Million is a very amusing musical skit on American State elections. It is very well acted, even by Mr. Dick Powell; and from the first sequences of a bankrupt musical troupe stranded in drenching rain in the most provincial of main streets, while an aged candidate drones to an empty hall of his birth in a log cabin and his thirty years, of service, one is aware of a direction unusually vivid, .amusing. and