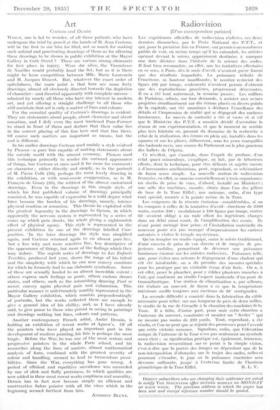 Witten-, one is led to wonder, of all those patients who have undergone the trial by pencil at the hands of M. Jean Cocteau, will be the first to sue him for libel, not so much for making such unkind and penetrating drawings of them as for allowing these drawings to be shown in public exhibition at the Mayor Gallery in Cork Street ? There are various strong claimants for first place in injury. Were she alive, the Vicomtesse de Noailles would probably head the list, but as it is there might be keen competition between Mlle. Marie Laurencin and M. Jacques Doucet. But, whatever the exact order of spitefulness, the main point is that here are some forty drawings, almost all obviously directed towards the depiction of character—and directed apparently with complete success— admired by nearly all those who have any interest in modern art, and yet offering a straight challenge to all those who still maintain that art is only a matter of lines and colours

For the essential quality of Cocteau's drawings is evident.

They are statements about people,. about character and about sensation, and I defy even the most hardened Pure-Former to stand in front of them and declare that their value lies in the correct placing of this line here and that line there. Of course such matters are important as means, but the end is different.

In his earlier drawings Cocteau used mainly a style evolved

by Picasso—a pure line capable of making statements about the outside world with the utmost economy. Picasso used this technique primarily to render the outward appearance of things, but Cocteau at once used it far more for comments on character ; either directly and simply, as in the portrait of M. Pierre Cone (26), perhaps the most lovely drawing in the exhibition, or with semi-comic exaggeration, as in M. Francois de Goury (28), the wittiest of the almost caricatural drawings. Even in the drawings in this simple style, of which his first published volume of drawings principally consisted, he was capable of expressing in a mild degree what later became the burden of his drawings, namely, intense physical emotion or sensation. This theme lie exploited with the greatest ingenuity in the drawings to Opium, in which apparently the nervous system is represented by a series of cones up which pain shoots, the whole giving a nightmarish effect of physical agony. This style is represented in the present exhibition by one of the drawings labelled Com- position. 'In the later drawings the style was simplified again, and Cocteau returned again to an almost pure line, but a less wiry and more sensitive line, less descriptive of the appearance of things, but more of the feelings which they may induce. The superb series of drawings to Les Enfants 'J'erriblcs, produced last year, shows the range of his talent and the simplicity with which he can now convey emotions for which he formerly had to use elaborate symbolism. Some of these arc sexually loaded to an almost incredible extent ; others express such feelings as panic, others curious dream states, and others, such as the astonishing drawing Paul se mean, convey again physical pain and exhaustion. This particular manner is unfortunately scantily represented in the Mayor Gallery exhibition, which consists preponderatingly of portraits, but the works collected there are enough to give a general idea of his ability, and, as I have already said, to give pause to those who persist in seeing in paintings and drawings nothing but lines, colours and patterns.

Another contemporary French artist, Andre Derain, is holding an exhibition of recent works at Agnew's. Of all the painters who have played an important part in the development of modern painting, his fate is perhaps the most tragic. Before the War, he was one of the most serious and progressive painters in the whole Paris school, and his researches along the lines of austere, almost mathematical analysis of form, combined with the greatest severity of colour and handling, seemed to lead to tremendous possi- bilities. Since the War, everything has gone wrong. A period of efficient and repetitive succulence was succeeded by one Of slick and fluffy prettiness, to which qualities are now added in these most recent works emptiness and unreality. Derain has in fact now become simply an efficient and unattractive Salon painter with all the vices which in the beginning seemed furthest from him.