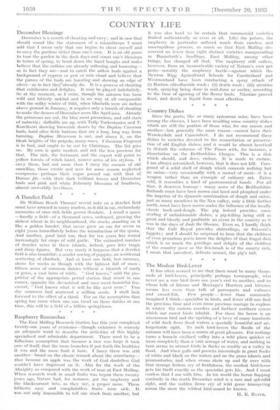 Raspberry Researches The East Mailing Research Station has this year

completed twenty-one years of existence—though existence is scarcely an adequate word to describe the activities of this highly specialised and admirable department. There used to be a fallacious assumption that because a tree was large it took care of itself, that the more branches it put forth the healthier it was and the more fruit it bore. I fancy there was still another—based on the classic remark about the strawberry— that because an apple was the work of God doubtless God couldn't have improved on it. Alas for the work of the Almighty as compared with the work of man at East Mailing. When research work in small fruits was begun there twenty years ago, Nature had, for instance, got the raspberry and the blackcurrant into, as they say, a proper mess. These hitherto easy and complanitless fruits were sick. It was not only impossible to tell one stock from another, but

it was also hard to be certain that commercial varieties fruited authentically or even at all. Like the potato, the raspberry in particular suffered much from careless and unscrupulous growers, so much so that East Mailing dis- covered no fewer than eight distinct varieties masquerading as Bauniforth's Seedlings. East Mailing, among other things, has changed all that. The raspberry still suffers, however, from an inconceivable variety of Nature's own pet pests—notably the raspberry beetle—against which the Newton Rigg Agricultural Schools for Cumberland and Westmorland have been conducting a spray attack of (i) Barium silicofluoride wash ; (ii) derris wash ; (iii) nicotine wash, spraying being done in mid-June or earlier, according to the time of opening of the flower buds. Nicotine proved least, and derris in liquid form most effective.