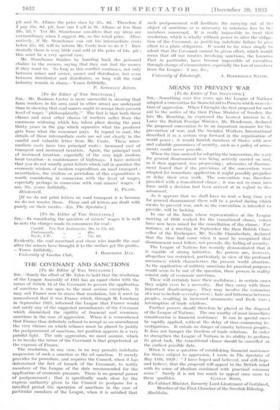 Sin,—Something over live years ago the League of Nations adopted a convention for financial aid to Powers which were vic- tims of aggression. When I brought the first proposal for such aid to the notice of the then Prime Minister of Sweden, the late Mr. Branting, he expressed the keenest interest in it., Later the British Foreign Minister, Mr. Henderson, declared the proposed convention to be an important measure for the prevention of war, and the Socialist Workers International described it as a serious step forward in the organisation of world peace ; it would furnish numbers of States with new and valuable guarantees of security, such as a policy of arma- ments could never provide.

When the time arrived for adopting the convention, the work for general disarmament was being actively carried on and, as it then appeared, was progressing ; advocates of disarma- ment feared that if the provisions of the convention were adopted for immediate application it might possibly prejudice or delay their own work. The convention was therefore provided with a transitional clause ; it was not to come into force until a decision had been arrived at in regard to dis- armament.

As it appears that we shall have to wait a long time yet for general disarmament there will be a period during which means to prevent war, such as the convention is intended to provide, will be Jacking.

In one of the lands whose representative at the League meeting of 1930 worked for the transitional clause, voices have now been raised for the cancellation of the clause. For instance, at a meeting in September the then British Chan- cellor of the Exchequer, Mr. Neville Chamberlain, declared that the time had conic when it must he recognised that disarmament must follow, not precede, the feeling of security.

The League of Nations has recently demonstrated that it is capable of strong initiative. Its powers arc, however, altogether too restricted, particularly in view of the profound uneasiness which characterises the present world situation. As the application of military sanctions for practical purposes would seen► to be out of the question, these powers in reality consist only of economic sanctions.

• These will certainly have their usefulness ; in certain eases they might even be a necessity. lint they carry with them important disadvantages. They may involve the extension of a war to include several pavers ; hate and bitterness between peoples, resulting in increased armaments and fresh wars ; interruption of trade relations.

Further powers should therefore be placed at the disposal of the League of Nations. Tlie one worthy of most immediate Consideration is financial assistance. It can in special cases be rapidly applied, withcut the delay of time-consuming in- • vestigations. It entails no danger of enmity between peoples. It does not hamper the freedom of trade relations. In order to strengthen the League of Nations in its ability to perform its great task, the transitional clause should be cancelled at the earliest possible date.

When it was a question of establishing financial assistance for States subject to aggression, I wrote in The Spectator of May 11th, 1929: " I have hoped and believed, and still hope and believe, that the proposal will appeal to the British mind with its sense of idealism combined with practical common sense." Surely it is not too much to appeal once more to By-Cabinet Minister, formerly urd-Lieutenant of Cothland, Member of the Fitit Chamber of the Swedish Riksdag. Stockholm.