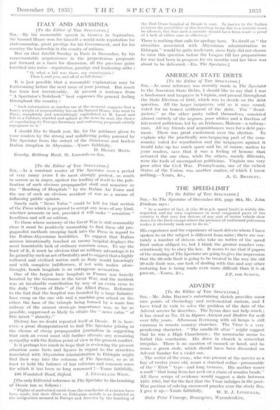 reader of The Spectator over a period of very many years' I do most strongly protest, as much in sorrow as in anger, against the lending of itself to the pub- lication of such obvious propagandist stuff and nonsense as the " Bombing of Hospitals " by the Italian Air Force and the use of such an obvious accident of war as a means of inflaming public opinion.

Surely such " News Value " could be left for that section of the Press which is prepared to accept any news of any kind; whether accurate or not, provided it will make " sensation " headlines and sell an edition.

To those whose memory of the Great War is still reasonably clear it must be positively nauseating to find these old pro- pagandist methods creeping back into the Press in regard to the Italian-Abyssinian hostilities. To suggest that Italian airmen intentionally bombed an enemy hospital displays the most lamentable lack of ordinary common sense. To say the least of it, it must be obvious that no military advantage is to be gained by such an act of brutality and to suggest that a highly cultured and civilise(' nation such as Italy would knowingly and with complete indifference, if not with malice afore- thought, bomb hospitals is an outrageous accusation.

One of the largest base hospitals in France was heavily bombed by the Germans in the Great War, and the incident was an invaluable contribution by way of an extra verse to the daily " Hymn of Hate " of the Allied Press. Reference to the fact that the hospital was bounded by a large Infantry base camp On the one side and a .machine-gun school on the other; the base of the triangle being formed by a main line railway of the utmost strategic importance was, as far as possible, suppressed as likely to vitiate the " news value "• of this latest " atrocity."' Ilistory has no doubt repeated itself at DesSie. It is how ever,• a great disappointment to find The Spectator joining in the chorus of cheap propagandist -jourhaliStri in suggesting that such an event must still further alienate any remaining Sympathy with'the Italian point of view in the-present conflict.

Is it perhaps too much to hope that in reviewing the present situation some facts and figures in regard to the atrocities associated With Abyasinian administration in Ethiopia Might find their :way into the Columns of The Spectator, SO as at least to hold the balance of fair criticism and common' sense for which it hak been so long renowned ?—Yours faithfully, [The only Editorial reference in The Spectator to, the bombing of Dessie ran to follows " Flights of undoubtoctrnerit from the standpoint of aviation have boon made, but their effect on Ethiopian morale is as doubtful as the indignation aroused in Europe and America by the bombing of

the Red Cross hospital at Dessie is sure. In justice to the Italian aviators the possibility of this bombing being duo to a mistake must be allowed, but that such a mistake should have been made is proof of a lack of either care or efficiency."

There is nothing that calls for apology here. To dwell on " the atrocities associated with Abyssinian administration in Ethiopia " would be quite irrelevant, since Italy did not choose to raise this question before the League till her preparations for war had been in progress for six months and her blow was about to be delivered.—ED. The Spectator.]