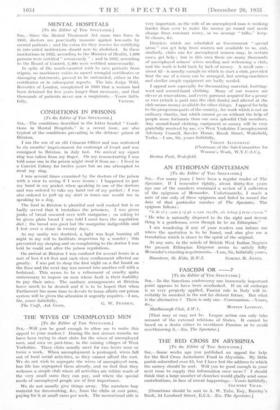 [To the Editor of THE SPECTATOR . ]

SIR,—The conditions described in the letter headed " Condi- tions in Mental Hospitals," in a .recent issue, are also typical of the conditions prevailing in the debtors' prison at Brixton.

I am the son of an old Crimean Officer and was sentenced to six months' imprisonment for contempt of Court and was consigned to Brixton, in July last. On arrival my signet ring was taken from my finger. On my remonstrating I was told some one in the prison might steal it from inc ; I lived in a Convict Colony for twelve years but no one attempted to steal my ring.

I was several times examined by the doctors of the prison with a view to seeing if I were insane ; I happened to put my hand in my pocket when speaking to one of the doctors and was ordered to take my hand but of my pocket ; I was also ordered to pull up my shirt in tones one would use in speaking to a dog.

The food in Brixton is, plentiful and well .cooked but is so badly served that it brutalises the prisoners. I was given junks of bread smeared over with margarine ; on asking to be given plain bread _I was told I must have the regulation diet ; the bread was good but the margarine indigestible and I lost over a stone in twenty days.

As my sanity was doubted, a light was kept burning all night in my cell to facilitate inspection by a warder ; this prevented my sleeping and on complaining to the doctor I was told he could not alter the prison regulations.

On arrival at Brixton I was confined for several hours in a sort of box 8 x 8 feet and such close confinement affected me greatly. T was put to sleep the first night on a flat board on the floor and the next day was moved into another cell with a bedstead. This seems to be a refinement of cruelty quite unnecessary to impose on men whose fault is their inability to pay their rates. The sanitary arrangements at Brixton leave much to be desired and it is to be hoped that when Parliament has more time to devote to home affairs our prison system will be given the attention it urgently requires.-1 am, Sir, yours faithfully,