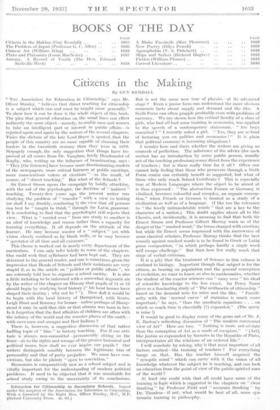 Citizens in the Making

" Tun Association for Education in Citizenship," says Mr. Oliver Stanley, " believes that direct teaching for citizenship is a. subject which can and must be taught more generally." To show how it can be done is the whole object of this book. The plea that general education on the usual lines can effect indirectly the same object—namely, to enable men and women to take an intelligent part or interest in public affairs—is rejected again and again by the writers of the several chapters. Twice the dictum of the late Lord Bryce is quoted, that the people of this country are no more capable of choosing their leaders in the twentieth century than they were in 1870. Strangely enough, the only suggestion that things have im- proved at all comes from Dr. Vaughan, lately Headmaster of Rugby, who, writing on the influence of broadcasting, says : " They [the listeners] have become more discriminating readers of the newspapers, more critical listeners at public meetings, more conscientious voters at elections "-as the result, of course, of "'direct teaching." But what of the Schools ? Sir Ernest •Simon opens the campaign by boldly attacking, with the aid of the psychologist, the doctrine of " indirect " teaching. Twenty-five' years ago the present writer was studying the problem. of " transfer " with a view to testing (or shall I say frankly, combating ?) the view that all persons' can best be " taught to think " through the Latin grammar. It is comforting to find that the psychologist still rejects that view. What is " carried over " from one study to another is an ideal of knowledge and reason rather than a capacity for learning everything. It all depends on the attitude of the learner. He may become master of a " subject " yet with vision closely confined as by blank walls, or he may become " spectator of all time and all existence."

This theme is worked out in nearly every department of the Curriculum. I can only refer briefly to some of the chapters.. One could wish that syllabuses had been kept out. They are deterrent to the general reader, and one is sometimes given the impression that Heads of Schools and their assistants are very stupid if, as in the article on " politics or public affairs ", we are. solemnly told how to organise a school society. It is also a little irritating to be informed with a somewhat dogmatic air by the writer 'of the chapter on History that pupils of 11 or 12 should begin by studying local history (" his local heroes have shaped their destiny ; why not he ? "). How dull it would be to begin with thc local history of Hampstead, with Keats, Leigh Hunt and Romney for heroes—unless perhaps of Hamp: stead it may be said, that this or that airman was born in her. Is it forgotten that the first affinities of children are often with the infancy of the world and the remoter places of the earth—

with cave-men and savages and Red Indians ? • •

There is, however, a suggestive discussion of that rather baffling topic of " bias " in history teaching. For if our atti- tude is always non-committal—permanently sitting on the fence--tis to the rights, andwrongs of the greater historical and political issues, how shall we ever inspire our pupils ? Our writers distinguish sensibly between the legitimate bias of personality and that of party prejudice. We must have con victions, but also be plainly " open to conviction."

problems. It used to be objected that it was unsuitable for school study owing to the uncertainty of its conclusions.

Education for Citizenship in Secondary Schools. Issued under the, auspiees of the Association for E4ueation in Citizenship. With a foreword by the Right Hon. Oliver Stanley, M.C., (Oxford University Press. 4s. Bd.)

But is not the same now true of physics—at its advanced stage ? Even a junior form can understand the more obvioivi economic facts about supply and demand and the like. A Sixth Form can often grapple profitably even with problems of currency. We are shown how the critical faculty of a class of girls, who had all had some training in economics, was applied to the speech of a contemporary statesman.. " Are boys conceited ? " I recently asked a girl. " Yes, they are so fond of lecturing you on politics and economics " It is plain that political economy is becoming ubiquitous

I wonder here and there whether the writers are giving us counsels of perfection. The substance of the advice (for each section has an introduction by some public person, usually not of the teaching profession) comes direct from the experience of teachers ; but is there really time for it all? Often one cannot help feeling that those who persevere through a Sixth Form course can certainly benefit as suggested, but what of those who only reach School Certificate ? This is especially true of Modern Languages where the object to be aimed at is thus expressed : " The abstraction France or Germany is vitalised, becomes colourful and complex, an organic concep- tion," when French or German is treated as a study of a civilisation as well as of a language. (I like too the reference to " the lovely untranslatable words " that are a key to the character. of a nation.) This doubt applies above all to the Classics, and, incidentally, it is amusing to find that both Sir Ernest Simon and Professor Gilbert Murray warn us of the danger of the " masked word," the terms charged with emotion.; but while Sir Ernest seems impressed with the narrowness of some classical scholars, Professor Murray thinks that the best remedy against masked words is to be found in Greek or Latin prose composition, " in which perhaps hardly a single word will escape challenge." But then how few really reach that stage of verbal criticism.

It is a pity that the treatment of Science in this volume is confined to biology. Iniportant though that subject is for the citizen, as bearing on population and the general conception of evolution; we want to know, as also in mathematics, whether the student of the exacter sciences can " carry over " his ideal of scientific knowledge to the less exact. Sir Percy Nunn gives us a fascinating study of The arithmetic of citizenship based on the demand note for rates and the like. " Fanelli; arity with the normal curve ' of statistics is much more important," he says, " than the quadratic equations . . on which so much time is cheerfully (?) expended," (The query is mine I) It would be good to display many of the gems out. of Mr. J. E. Barton's refreshing discussion of " The modern communal view of Art" Here are two. " Nothing is more out-of-date than the conception of Art as a mode of escapism." " [Art]; like' ustiee as expounded by Socrates in the Republic of Plato; interpenetrates all the relations of an ordered life."

• I will 'conclude by asking, why is that most important of all factors omitted—the training of teachers ? For everything hangs on that. Has the teacher himself acquired the " synoptic mind " which' can carry' with it the vision of all knowledge whatever the subject he is teaching, and can look on education 'from the point of view of the public-'spirited man of the world ?

At least one could wish that all could have some of the training in logic which is suggested in the chapters on " cleat thinking " by Professor Field and " accurate thinking " by Dr. •Thouless—if net,- what would be best of all, some sys-