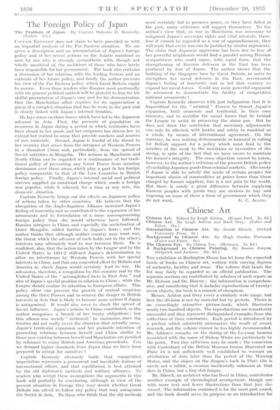 CAPTAIN KENNEDY does not claim to have provided us with an impartial analysis of the Far Eastern situation. We are given a description and an interpretation of Japan's foreign policy and of her recent actions on the Asiatic mainland as seen by one who is strongly sympathetic with, though not wholly uncritical of, the ambitions of those who have lately been responsible for her governiment. The book also contains a discussion of her relations with the leading Powers and an estimate of her future policy, and finally the author presents his view of the Far Eastern policy which Great Britain ought to pursue. Even those readers who disagree most profoundly with his general political outlook will be grateful to him for his skilful presentation of Japan's case and for his demonstration that the Manchurian affair requires for its appreciation a grasp of a complex situation that has its roots in the past and is closely linked with Japan's internal troubles.

He lays stress on three forces which have led to the Japanese advance in , Asia. First, the pressure of population on resources in Japan during a period in which territories have been closed to her goods and her emigrants has driven her to extend her control to areas that provide markets and sources of raw materials. .Second, Japan is fearful of. the threat to her security that arises from the intrigues of Western Powers in a disunited, China and, particularly, from the spread of Soviet activities in Mongolia. Her actions in Manchuria and. North China can be regarded as a continuance of her tradi- tional policy of preventing any Great Power from securing dominance over those areas, which play a part in her foreign policy comparable to that of the Low Countries in British foreign policy. Finally, Japan's internal social and political stresses. supplied an emotional charge which made a foreign war popular, while it relieved, for a time at any rate, the domestic situation.

Captain Kennedy brings out the effects on Japanese policy of actions taken by other countries. He believes that the abrogation of the .Anglo-Japanese Alliance increased Japan's feeling of insecurity and so contributed to the expansion of her armaments and to formulation of a more uncompromising foreign . policy than she would otherwise have followed. Russian intrigues in China, and especially the sovietisation of Outer Mongolia, added further to Japan's fears ; and the author thinks that although neither country may want war, the threat which the advance of each, holds out to the other's interests may ultimately lead to war between them. He is confident, also, that the action taken by the League and by the United States in 1931-2 stiffened Japan's determination to allow no interference by Western Powers with her special interests in China, and that any concerted effort by Britaivand America to check Japan would certainly lead to war. He advocates, therefore, a recognition by this country and by the United States of the " accomplished, facts in East Asia " and also of Japan's special position in relation to China ; while the League should confine its attention to European affairs. This policy alone can prevent the growth of mutual suspicion among the three Powers and so,remove the danger to British interests in Asia that is likely to become more serious if Japan is antagonised. It would also serve to cheek the spread of Soviet influence. Japan's actions in China constituted, as the author reeegnises, a breach of her treaty obligations ; but this offence was merely " technical," he maintains, since the treaties did not really cover the situation that actually arose. Japan's territorial expansion and her probable intention of promoting relations between herself and China similar to those now existing between herself and Manchukuo are justified by reference to many British and American precedents. Can we demand higher standards from Japan than we have been

prepared to accept for ourselves ? • . .

Captain Kennedy obviously holds that competitive imperialism represents a permanent and inevitable feature of international affairs, and that equilibrium is best attained by the old diplomatic methods and military alliances. To readers who accept these assumptions the arguments in this book will probably be convincing, although in. view of the present situation in Europe they may doubt whether Great Britain can afford to follow any policy that may antagonise the Soviet in Asia. To those who think that the old methods must certainly fail to preserve peace, as they have failed in the past, many criticisms will suggest themselves. To the author's view that, as war in Manchuria was necessary to safeguard Japan's sovereign rights and vital interests, there- fore it cannot be regarded as a war of aggrandisement, they will reply that.every war can be justified by similar arguments. The claim that Japanese. aggression has been due to fear of her powerful neighbours would find a parallel among Russian sympathisers who could argue, with equal force, that the strengthening of Russian defences in the East has been produced by fear of Japan. The author, shows that the building of the Singapore base by Great Britain, in order to strengthen her naval defences in the East, accentuated Japan's feeling of insecurity and so led that country. to expand her naval forces. Could any more powerful argument be advanced to demonstrate the futility of competitive national armaments ? .

Captain Kennedy, observes with just indignation that it is hypocritical for the " satiated " Powers , to thwart, Japan's expansion, both economic and territorial, in their sown interests, and to mobilise the moral forces that lie behind the League to assist in preserving the status quo.. But he does, not draw the conclusion that necessary , adjustments can only be effected, with justice and. safety to. mankind as a whole, by means of international agreement. On the contrary, he sees nothing, dishonourable or immoral in calling for British support for a policy which must lead to the sacrifice of the weak to the ambitions or necessities of the strong, in spite of the fact that we have sworn to maintain the former's integrity. The same objection cannot be, taken, however, to the author's criticism of the present British policy of excluding Japanese goods from colonial markets. . Obviously if Japan is able to satisfy the needs of certain peoples for important classes of commodities at prices lower than those charged by former suppliers, this is a net gain to the world. But there is surely a great difference between supplying Eastern peoples with goods they are anxious to buy and imposing on some of them a form of government which they