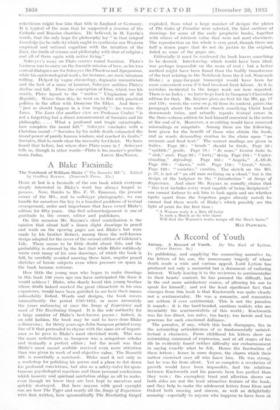 Herm at last is a facsimile of the one book which everyone deeply interested in Blake's work has always longed to possess. Now, thanks to Mrs. F. W. Emerson, the present owner of the MS., and to collotype photography, we can handle for ourselves the key to a hundred problems of textual arrangement, order and importance that have vexed Blake's editors for fifty years. Our first acknowledgement is one of gratitude to the owner, editor and publishers.

On this occasion Mr. Keynes's chief contribution is the opinion that about half a dozen slight drawings in pencil and wash on the opening pages are not Blake's but were made by his brother Robert, among them the well-known design adapted for the cover of the second edition of Gffehrist's Life. There seems to be little doubt about this, and the probability is stressed by the fact that while Blake ruthlessly wrote over many of his own drawings, of which the book is lie carefully avoided marring these faint, angular pencil sketches of heroic subjects even when pressure on space in the book became extreme.

How little the young man who began to make drawings in this book 150 years ago can have anticipated the fame it would achieve 1 Blake, who dearly loved this young brother whose death indeed marked the great climacteric in his own experience, would have been gratified to sec here their names indissolubly linked. Words and designs,. the book covers intermittently the period 1785-1812, or more tie/etre tely the years embracing at once the. Songs of Experience and most of The Everlasting Gospel. It is the sole' authority for a large number of Blake's best-known poems : indeed, in an odd fashion, the book may be said to have done Blake a disservice ; for thirty years ago John Sampson printed every line of it that pretended to rhyme with the same air of import- ance as he gave to Blake's most cherished work. This was the more unfortunate as Sampson was a scrupulous scholar and textually, a perfect editor ; but • the result was that Blake's most casual scribble received even more attention than was given to work of real objective value. The Rossetti MS. is essentially a notebook. Blake used it not only as a workshop for polishing his poems and a place to dot down his profound convictions, but also as a safety-valve for spon- taneous psychological reactions and those personal confessions which honesty and spiritual sanitation oblige us all to make, even though we know they are best kept to ourselves and quickly destroyed. But here anyone with good eyesight can see how The Tyger and nearly all the Songs of Experience were first written,. how spasmodically The Everlasting Gospel. exploded, from what a large number of designs the plates of The Gates of Paradise were selected, the faint outlines of

drawings for some of the early prophetic books, together with others of intrinsic value that were not used elsewhere. The reproduction on the whole is very good, though there arc half a dozen pages that do not do justice to the original, faded as some of the pages arc.

Editorially it must he confessed, the hook leaves something to be desired. Interleaving, which would have been ideal,

was perhaps impossible on the score of cost ; but a better method might have been found than the bodily transference of the text relating to the Notebook from the 3 vol. Nonesuch Blake ; a page-for-page transcript would have been far more convenient even if it had involved fresh labour. As it is, mistakes incidental to the larger work are here repeated. There is no Index : we have to go back to Sampson's Clarendon edition for that Mr. Keynes gives no text for the MS. pp. 17 and 116 ; wrests the verse on p. 62 from its context, prints the paragraph about the modern church crucifying Christ head downwards twice, and actually repeats textual errors in the three-volume edition he had himself corrected in the notes at the end of it. Moreover, a re-editing would have removed misreadings or misprints. Among them are the following, here given for the benefit of those who obtain the book, and as words demanding caution to the claim upon " an accurate and final text." The correct readings are given in italics. Page 36 : " bends " should be binds. Page 58 : " quibble," gentle. Page 78 : " Je nous," Genius looks to. " sink," suck. Page 96 : " forty," thirty. Page 104 : " Under- standing," defending. Page 105: " Angelo," A.Alb.D. Page 108 : " shewn," sold. Page 116 : " Great," Greek. Page 120: " varieties," vanities. The sketch on the MS. p. 57, is not of " an old man reclining on a cloud," but is the design of the tailpiece to the " Introduction " of Songs of Experience. And since Mr. Keynes so roundly. claims that " this text includes every word capable of being deciphered," one cannot forbear to ask him to look again and see whether (quite apart from the forgotten pages already noted) he cannot find these words of Blake's which possibly see the light of print for the first time : " A Woman scaly & a Man all hairy

Is such a Match as ho who dares

Will find the Woman's scales scrape off the Man's hairs."