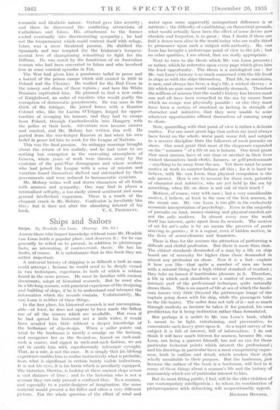 Ships. By Hendrik van Loon. (lb:wrap. lOs. 6d.) Anoxia those who impart knowledge without tears Mr. Hendrik van Loon holds a popular place, and deserves it ; for he can generally be relied on to present, in addition to picturesque facts, an interesting, if controversial,. thesis. He has his faults, of course. It is unfortunate that in this book they are rather important.

A universal history of shipping is as difficult a task as man could attempt ; because he would need to be deeply versed in two techniques, expertness in both of which is seldom found in the same person. He must be familiar with ancient documents, adept at historical research. But he must also be a life-long seaman, with practical experience of the designing and building of ships, if he is to understand and interpret the information which the records contain. Unfortunately, Mr. van Loon is neither of these things.

In the first place, his historical research is not unexception- able—at least, he does not appear to have made the fullest use of all the sources which are available. But even if lie had spread his historical net a little wider, it would have availed him little without a deeper knowledge of the technique of ship-design. When a sailor points out what to the landsman is merely a smudge on the horizon, and recognises her as the So-and-so, bound on such-and- such a course, and rigged in such-and-such fashion, we are apt to credit him with superhumanly telescopic eyesight. That, as a rule, is not the case. It is simply that his lifelong experience enables him to realise instinctively what is probable, from what is significant in certain barely visible indications. It is not his eyes, it is his brain which is peculiarly equipped. The historian, likewise, is looking at these ancient ships across a vast distance of time ; and to the historian who is not a seaman they can only present a confused blur. To a seaman, and especially to a yacht-designer of imagination, the same Material would present a far fuller and often a very different picture. For the whole question of the effect of wind and water upon sonic apparently unimportant difference is so intricate ; the difficulty of establishing, on theoretical grounds,

what would actually have been the effect of some device now obsolete and forgotten, is so great ; that I doubt if there are half a dozen men alive in the world today who are really fitted to pronounce upon such a subject with authority. Mr. van Loon has brought a picturesque point of view to-the job ; but no other qualities, I am afraid, that are really appropriate.

Next to turn to the thesis which Mr. van Loon presents ; or rather, which he reiterates upon every page which gives him the least opportunity. The thesis is a sociological one : for

Mr. van Loon's history is as much concerned with the life lived in ships as with the ships themselves. That life, he maintains,

is now, and always has been, a dog's life, a wicked slavery : a life which no sane man would voluntarily stomach. Therefore the millions of seamen that the world's history has known must one and all have been compelled to the sea by causes from which no escape was physically possible : or else they must have been a section of mankind so lacking in strength of character and initiative, that they were unable to seize whatever opportunities offered themselves of running away to shore.

Now, quarrelling with that point of view is rather a delicate matter. For one must grant him that sailors are (and always have been) on the whole, worse paid, worse fed, and subject to a severer discipline than the followers of most pursuits on shore. One must grant that most of the eloquence expended on the " romance " of a life at sea is hokum. One must grant that most seamen have at one time or another in their lives wished themselves bank-clerks, farmers, or golf-professionals —anything to be away from the sea. Yet there must be some motive at work to counter-balance all this ; for it is hard to believe, with Mr. van Loon, that physical compulsion is the sole answer. How is one to account for those men, patently of character and initiative, who are yet held to the sea by something, when life on shore is not out of their reach ?

Motives, of course, vary with men ; but a very considerable motive, I believe, at least in the case of the best seamen, is the moral one. Mr. van Loon is too glib in his exclusively economic interpretation of psychology. Even in the majority of pursuits on land, money-making and physical comfort are not the only motives. In almost every ease the work itself has interest, quite apart from its rewards. The motive of art for art's sake is by no means the preserve of poets starving in garrets ; it is a cogent, even if hidden motive, in the lives of sewer-cleaners and financiers.

There is thus for the seaman the attraction of performing a difficult and skilful profession. But there is more than that.

The ethical standards demanded of a man by a life on ship board are of necessity far higher than those demanded in almost any profession on shore. Now it is a fact—explain it how you like—that quite a number of men are born with a natural liking for a high ethical standard of conduct ; they take an honest if inarticulate pleasure in it. Therefore, a life in which such standards are a matter of necessity, an intrinsic part of the professional technique, quite naturally draws them. This is an aspect of life at sea of which the lands- man knows very little (beyond the picturesque image of the captain going down with his ship, while the passengers take to the life-boats). The sailor does not talk of' it—not so much through modesty as because he takes it for granted, his own predilection for it being instinctive rather than formulated.

But perhaps it is unfair to Mr. van Loon's book, which meant to be light, entertaining, and provocative, to concentrate such heavy guns upon it. As a rapid survey of its subject it is full of interest, full of information. I do not think it will have much interest for seamen, because Mr. van Loon, not being a seaman himself, has not an eye for those particular technical points which interest the professional ; and his drawings in particular have a most exasperating vague- ness, both in outline and detail, which renders their style wholly unsuitable to their purpose. But the landsman, just because the author of the book is a landsman, will find in it many of those things about a seaman's life and the history of seamanship which are of particular interest to him.

But its most fitting public, I feel, will be the elder children of our contemporary intelligentsia : to whom its combination of picturesqueness with debunking will unquestionably appeal.