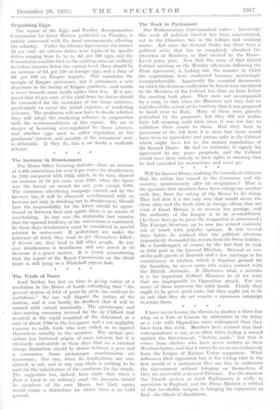 Page 3, 20 December 1935 — Will Sir Samuel Hoare, realising the tornado of criticism that
Close

Will Sir Samuel Hoare, realising the tornado of criticism that

his action has caused in the Commons and the country, spontaneously offer his resignation ? That is the question that members have been asking one another each day, from the sitting of the House to its rising. They feel that it is the only way that would secure the clean slate and the fresh start in foreign affairs that are vital if Great Britain is to recover her prestige, and the authority of the League is to be re-established. [As these lines go to press the resignation is announced.] The Foreign Secretary up to now has seemed curiously out of touch with popular opinion. It was several days before he realised that the political situation imperatively demanded his return from his Swiss holiday-. He is handicapped, of course, by the fact that he took so little part in the General Election. Beyond an eve- of-the-poll speech at Norwich and a few meetings in his constituency at Chelsea, which is hopeless ground for the Socialists, he never came into active contact with the British electorate. It illustrates what a mistake it is for important Cabinet Ministers to sit for seats that are impregnable to Opposition attack. Far too many of them represent the solid South. Clearly they ought to be given good seats, but they ought not to be so safe that they do not require a strenuous campaign to retain them.