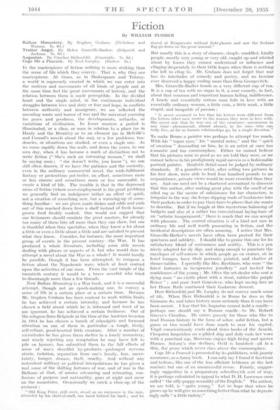 By WILLIAM PLOMER IN the masterpieces of fiction nothing is more striking than the sense of life which they convey. That is why they are masterpieces. At times, as in Shakespeare and Tolstoy, a world is supremely created in which we can enter into the motives and movements of all kinds of people and at the same time feel the great movements of history, and the relation between them is made perceptible. In the divided heart and the single mind, in the continuous individual struggles between love and duty or fear and hope, in conflicts between authority and insurgence, we see reflected the unending waste and horror of war and the universal yearning for peace and goodness, -the developments, setbacks, or variations of civilisation. In lesser masters a period . is illumihated,. or a class, or man in relation to a place (as in Hardy and the Brontës) or to art element (as in Melville's and Conrad's novels about the sea), or a few problems, ten- dencies, or situations are studied, or even a single one. As we come rapidly down the scale, and down the years, to our own day, when it has become a mark of distinction not to write fiction (" She's such an interesting woman," we shall be saying soon ; " she doesn't write, you know "), we can still often discern, if we have the patience and the curiosity, even in the ordinary commercial novel, the wish-fulfilment fantasy or pretentious pot-boiler, an effort, sometimes more or less sincere and sometimes more or less successful, to create a kind of life. The trouble is that in the depressed areas of fiction (where over-employment is the great problem) we generally find an indulgence rather' an effort of spirit, not a creation of something new, but a warming-up of some- thing familiar : we are given .made dishes and odds and ends out of tins reached down from a shelf instead Of fresh home= grown food freshly cooked.' One would not suggest that our fictioneers should emulate the great masters, for already too many of them bite off more than they can chew, but one is thankful when they specialise, when they know a lot about a little or even a little about a little and are satisfied to present what they know. Consider, for instance, the most important group of events in the present century—the War. It has produced a whole literature, including some able novels dealing with phases or aspects of it, but who would dare to attempt a novel about the War as a whole ? It would hardly be possible, though it has been attempted, to compose a fiction about the Napoleonic wars, which at least centred upon the activities: of one man. From the vast tangle of the twentieth century it would be a brave novelist who tried to disentangle more than a few threads. NoW :Balkan Monastery is a War book, and it is a successful attempt, 'though not an epoch-making one, to convey, a sense of life a certain place at a certain time. Because Mr. Stephen Graham has been content to work within limits he has achieved a certain intensity, and because he has chosen a field about which he is informed and most of us are ignorant, he has achieved a certain freSlmess. Out of the refugees from Belgrade at the time of the Austrian invasion in 1914 he has chosen a bunch of schoolgirls and focussed attention on one of them in particular--a tough, lively, self-reliant, good-hearted little creature. After a number of vicissitudes he has given them shelter in a lonely monastery, and wisely rejecting any temptation he may haVe felt to pile on horrors, has submitted them to the full effects of some of war's dreadful by-products—prolonged nervous strain, isolation, separation from one's family, fear, uncer- tainty, hunger, disease, theft, cruelty. And without any redundant military or political interpolations he has given a real sense of the shifting fortunes of war, and of war in the Balkans at that, of armies advancing and retreating, con- fusions of purpose and nationality, guns at night and snow on the mountains. Occasionally we catch a close-up of the eminent : ' " Old King Peter, still erect, stood on an eminence in the rain, attended by his chief-of-staff, one hand behind his back ; and he

stared at Kraguevats without field-glasses and saw the Serbian flag go down on the great arsenal."

But mostly this is a story of obscure, simple, muddled, kindly people, mostly very young or very old, caught up and whirled about by forces they cannot understand or influence and clinging desperately to their little hopes when there is nothing else left to cling to. Mr. Graham does not forget that war has its interludes, of comedy and poetry, and no heroine ever deserved a happy ending more than Desa Georgevitch.

Mrs. Granville-Barker hands us a very different cup of tea. It is a cup of tea with no sugar in it, a sour comedy, in fact, about that common and important human failing, indifference. A lonely and essentially serious man falls in love with an essentially ordinary woman, a little vain, a little weak, a little stupid, and incapable of passion : " It never occurred to her that his letters wore different from the letters other men wroto to the women they were in love with. She never saw that he was one of the creatures—uncommon in any time—phenomenal, almost absurd, in his own—who can truly live, as far as human relationships go, by a single devotion."

To make Bruno a painter was perhaps to attempt too much. With his topaz, eyes,". his " Mental notes," and the " spirit of creation " descending on him, he is an artist at once too romantic and too commonplace. Either we cannot believe that his pictures -were as good as we are told they were, or we cannot believe in his prodigiously rapid success as a fashionable portrait painter. Realistic detail must be judged by ordinary standards. If a penniless artist, after selling two pictures in his first shoW, were able to lend four hundred pounds to an acquaintance, private views would be more crowded than they are. And one need not be a chartered accountant to discover that this author,. after making great play with tfie smell of an Oiled rag as the means of subsistence for her characters, is irregular in the way she keeps slipping wads of banknotes into their pockets in order to pay their fares to places that she wants to describe.. But if we boggle at this mysterious balancing of budgets and also at a rather too conventional laying-bare of an "artistia temPerament," there is much that we can accept with pleasure. The central situation is of a kind not rare in ordinary life and Well" worth presenting in fiction, and the incidental descriptions arc often amusing. I notice that Mrs. Granville-Barker's novels have often been praised for their quietness and subtlety. - I should like to praise this onafor its satisfactory blend of seriousness and acidity. This is a pen nicely adapted for sly digs, and sharp enough to puncture the envelopes of self-esteem in which people go on cruises, sit in hotel lounges, have their portraits painted, and chatter at dinner-tables. I specially like Mrs. Beckham, who wore " the latest fantasies in inexpensive 'jewellery " and invited the confidences of the young ; Mr. Olive the art-dealer who sent a dying man " an exotic plant with a stout, rubber-like purple. Ildwer " ; and poor Aunt Genevieve, who kept saving face as her Home Rails' continued their Gadarene descent.

Herr Birkenfeld. and Mr. Langley do not convey much sense of life. When Herr Birkenfeld is in Ronie he does as the Germans do, and takes history more seriously than it can have been meant. I fear that his Augustus cannot hold a candle— perhaps one should say a Roman candle—to Mr. Robert Graves's Claudius. He caters gravely for those who like to read Roman history in the form of sober, solid fiction, but a goose or two would have done much. to save his capitol. Virgil conscientiously reads .aloud three books of the Aeneid, Cleopatra languishes on a gilded ship and duly ends her woes with a punctual asp, Maecenas enjoys high liVing and quotes Horace, Antony's star declines, Ovid is banished—all in a thin, flat prose which never rises above the commonplace. Cage Me a Peacock is presented by its publishers, with jaunty assurance, as a funny book. I can only say I found it facetious and tedious, like one of the less efficient tableaux at the last matinee but one of an unsuccessful revue. Faintly, snigger- ingly suggestive in a preparatory schoolboyish sort of way, it is perhaps calculated to appeal to what D. H. Lawrence once called " the silly-puppy sexuality of the English." The author, we are told, is " quite young." Let us hope that when he grows up he will give us something better than what he depreis- ingly calls " a little rudely:"