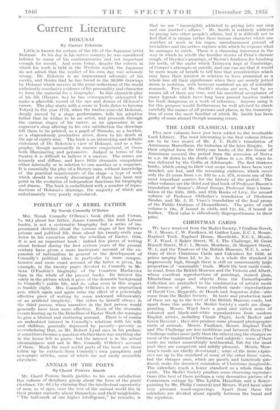 By Gustav Eckstein Little is known for certain of the life of the Japanese artist Hokusai. In his day in his native country he was considered inferior to many of his contemporaries and not important

enough for record. And even today, despite: the esteem in which his work is held in the Western world, the Japanese do not admit that the verdict of, his own day was seriously

wrong. Dr. Eckstein is an impassioned advocate of his merits, and thinks that lie has found in the 30,000 drawings

by Hokusai which survive in the print-collectioris, of the world sufficiently conclusive evidence of his personality and character to form the material for a biography. In this .chioniele-play of his life (Harper, Os.) he has consequently attempted to make a plausible record of the ups and downs of Holcusai's career, The play starts with a scene in Yedo (later to.become Tokyo) in the year 1773, when the -twelve-year-old Hokusai, deeply moved by a stage performance, tells his adoptive father that he wishes to be an artist, and proceeds through the various stages of his career, as an apprentice in an engraver's shop altering to his own satisfaction, the drawings left there to be printed, as a pupil of Shunsho, as a hawker, as a. stupendously productive artist, down to. his death at the age of eighty-nine. The book is an interesting and definite statement of Dr. Eckstein's view of Hokusai, and as abio- graphy,'though necessarily in essence conjectural, at times both illuminating and persuasive. Judged in terms. of the theatre it is difficult to believe it a success. The scenes are leisurely and diffuse, and have little dramatic, compulsion either internally or in relation to one another as a sequence. It is essentially the play of a literary man, without knowledge of the practical. requireinents of the stage—a type of work which should be sternly discouraged if there has been any point in the evolution of independent functions for biography and drama. The book is embellished with a number of repro- ductions of Hokuseti's drawings, the majority of which are unfortunately very poorly reproduced.