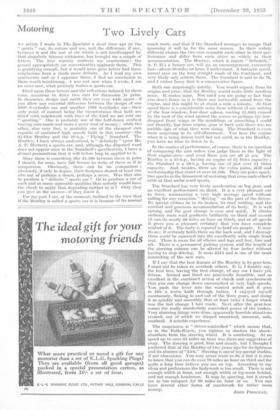 AN article I wrote in The Spectator a short time

ago on the " sports " ear, its nature and use, and the difference, if any, between it and the sort of ear which is not handicapped by that singularly fatuous nickname, has brought me a couple of letters. The first warmly contests my conclusions ; the second appropriately (or conveniently) applauds them. This is gratifying enough, but it would have gone better had those conclusions been a shade more definite. As I read my own sentiments and as 1 appraise them, I find no conclusion in them worth mentioning. I was not sure when I VITOte, I am no surer now, what precisely makes a sports car.

Hard upon these letters and the reflections induced by them came occasions to drive two cars for discussion [in print. In character, design and outfit they are very wide apart—if you allow any essential difference between the design of one 1936 6-cylinder ear and another 1936 6-cylinder ear—their only point of contact being the circumstance that both are fitted with coachwork with lines of the kind we are told are " sporting." One is probably one of the half-dozen swiftest touring cars made and costs a great deal of money ; while the other, also very fast, is probably one of the cheapest cars capable of sustained high speeds built in this country—the Ware Bentley and the 20-h.p. " Flying " Standard. The Bentley, I have always understood, is " definitely " (pace Mr, A. P. Herbert) a sports ear, and, although the disputed word does not appear once in the Standard's specification, 1 have a dismal premonition that it will before long be applied to it.

Since there is something like 11,100 between them in price I should, for once, have full license to write of them as if in comparison. Obviously, there can be no comparison ; obviously, if only in degree, their designers shared at least one aim out of perhaps a dozen, perhaps a score. Was that aim to produce a " definite " sports car ? Or to produce a car of such and so many agreeable qualities that nobody would have the cheek to apply that degrading epithet to it ? Only they can give us the answer—if they know it.

For my part I am, at the moment, inclined to the view that if the Bentley is called a sports car it is because of its normal coach work, and that if the Standard manages to escape that ignominy it will be for the same reason. In their widely different classes the two cars resemble each other in their per- formance and differ from each other as widely in their accommodation. The Bentley, which is (again " definitely," A. 1'. H.) a luxury car, will go, on encouragement, extremely fast—about 00 miles an hour, I understand. A fantastic speed, unreal save on the long straight roads of the Continent, and very likely only seldom there. The Standard is said to do 70, and 1 rather fancy that is a conservative figure.

Both run surprisingly quietly. You would expect, from its origins and price, that the Bentley would make little needless noise. It makes none. Not until you are going so fast that you don't listen to it is there any noticeable sound from the engine, and this might be at about a mile a minute. At that speed there is a considerable noise from without (I am writing of the four-window, four-door saloon, costing £1,460) caused by the rush of the wind against the screen or perhaps the low- dropped front wings or the mouldings or something 1 could not identify, but from engine, gear or back axle there was no audible sign of what they were doing. The Standard is even more surprising in its self-effacement. You hear the engine when it is being driven hard but not until, as in the Bentley, you have no time to listen to it.

In the matter of performance, of course, there is no question of comparing the cars unless you judge them in the light of their engine-sizes—and even there you arc all at sea. The Bentley is a 25-h.p., having an engine of 31 litres capacity ; the Standard is a 20-h.p. having one of just over 21 litres capacity. And, besides, there are the extra pains, skill and workmanship that stand at over £1,100. They arc poles apart, two specks in the firmament of motoring that cross each other's orbit at that awful word sports.

The Standard has very lively acceleration on top gear, and an excellent performance on third. It is a very pleasant car to drive, maintaining a very high average speed without calling for any conscious driving " on the part of the driver. Its special virtues lie in its brakes, its road holding, and the comfort and generous accommodation of its body. It is well sprung, and the gear change is easy and quick. It climbs ordinary main road gradients brilliantly on third and second (it can do nearly 60 miles an hour on third), and at all speeds it gives you a pleasant certainty that you have complete control of it. The body is reputed to hold six people. It may do so ; it certainly holds three on the back seat, and I daresay three could be squeezed into the excellently wide single front seat. There is room for all elbows and legs and feet, fore and aft. There is a permanent jacking system, and the length of the steering column can be altered by four inches without having to stop driving. It costs £315 and is one of the most interesting of the new cars.

If I say that the best feature of the Bentley is its gear-box, I must not be taken to overlook others. It is, I frankly say, the best box, having the best change, of any car I have yet driven. Second and third are practically inaudible, and so excellent is the combined action of clutch and synchromesh that you can change down unremarked at very high speeds. You push the lever into the wanted notch and it goes in like a warm knife through butter. I enjoyed myself enormously, flicking in and out of the three gears, and doing it so quickly and smoothly that at least twice 1 forgot which was the last change I had made. Next after the gear-box comes the really wonderfully controlled power of the brakes. Very alarming things were done, apparently horrible situations created, out of which we slipped unnoticed, innocent, safe, unafraid. A notable experience. • The suspension is " driver-controlled " which means that, as in the Rolls-Royce, you tighten or slacken the shock- absorbers from the steering wheel. It is comforting. At no speed up tO over 85 Miles an hour was there any suggestion of sway. The steering is good, firm and steady, but I thought I preferred that of the Bentley of two years ago for its lightness and its absence of "kick." Steering is one of ray special studies, if not obsessions. You may never want to do it but it is nice to know that you can do ever 70 miles an hour on third and for quite a long time believe you are on top, According to my ideas and preferences the bodywork is too small. There is not • enough width in front, not enough width or leg-mom behind, and not enough headroom. It may be sporting, but it struck me as too compact for 90 miles an hour or so. You can have several other forms of coachwork for rather more money. JOHN PRIOLEAU.