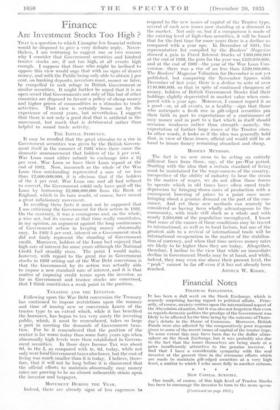 IT has been a dull week on the Stock Exchange, which is scarcely surprising having regard to political affairs. Prim- arily. of course, anxiety centres upon the international aspect of the Abyssinian situation, but it was also not forgotten that even us regards domestic politics the prestige of the Government was likely to be affected for the time being by the outcome of Thurs- day's debate in the House of ComMons. Moreover, British Funds were also affected by the comparatively poor response given to some of the recent issues of capital of the trustee type. To some extent this may have been due to the duller atmo- sphere on the Stock Exchange, but it was probably also due to the fact that the issues themselves are being made at a price insufficiently attractive to the genuine investor. I find that I have a considerable sympathy with the real investor at the present time in the strenuous efforts which are made to maintain gilt-edged securities at a very high level, a matter to which I refer more fully in another column.