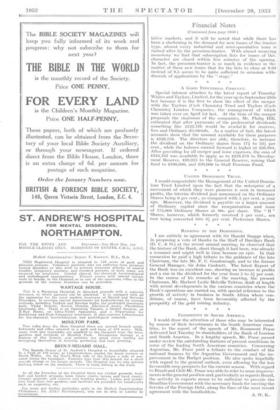 I would draw the attention of those who may be interested. by reason of their investments in the South American coun- tries, to the report of the speech of Mr. Beaumont Pease delivered last Tuesday to shareholders of the Bank of London and South America. In a lengthy speech, Mr. Pease passed under review the outstanding features of present conditions in some of the leading South American countries. Concerning' Argentina, Mr. Pease paid a tribute to the conduct of the national finances by the Argentine Government and the im- provement in the Budget position. He also spoke hopefully with regard to the general outlook, even allowing for the less favourable crop prospects for the current season. With regard to Brazil and Chili Mr. Pease was able to refer to some improve- ments in the general position and, particularly as regards Brazil, the activity in exports seems to be sufficient to provide the Brazilian Government with the necessary funds for meeting the Service of the Foreign Debt, along the lines of the most recent agreement with the bondholders. A. W. K.