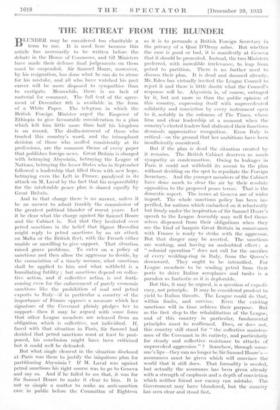 THE RETREAT FROM THE BLUNDER

BLUNDER may be considered too charitable a term to use. It is used here because this article has necessarily to be written before the debate in the House of Commons, and till Ministers have made their defence final judgements on them must be suspended. Sir Samuel Hoare, moreover, by his resignation, has done what he can do to atone for his mistake, and all who have watched his past career will be more disposed to sympathise than to castigate. . Meanwhile, there is no lack of material for comment. The full text of the agree- ment of December 8th is available in the form of a • White Paper. The telegram in which the British Foreign Minister urged the Emperor of Ethiopia to give favourable consideration to a plan which left him little more than half his kingdom is on record. The disillusionment of those who trusted this country's word, and the triumphant derision of those who scoffed consistently at its professions, are the common theme of every paper that publishes foreign news. Great Britain is charged with betraying Abyssinia, betraying the League of Nations, betraying the lesser States who in September followed a leadership that filled them with new hope, betraying even the Left in France, paralysed in its attack on M. Laval by the fact that his responsibility for the intolerable peace plan is shared equally by Great Britain.

And to that charge there is no answer, unless it be an answer to admit frankly the commission of the greatest political blunder of recent years. Let it be clear what the charge against Sir Samuel Hoare and the Cabinet is. Not that they hesitated over petrol sanctions in the belief that Signor Mussolini might reply to petrol sanctions by an air attack on Malta or the British fleet, with the French either unable or unwilling to give support. That situation raised grave problems. To enter on a policy of sanctions and then allow the aggressor to decide, by the enunciation of a timely menace, what sanctions shall be applied to him and what withheld is a humiliating futility ; but sanctions depend on collec- tive action, and if collective action is not forth- coming even for the enforcement of purely economic sanctions like the prohibition of coal and petrol exports to Italy—if in particular a country of the importance of France opposes a measure which her signature of the Covenant plainly pledges her to supportthen it may be argued with sonic force that other League members are released from an obligation which is collective, not individual. If, faced with that situation in Paris, Sir Samuel had decided that petrol sanctions must at least be post- poned, his conclusion might have been criticised but it could well be defended.

But what single element in the situation disclosed at Paris was there to justify the iniquitous plan for partitioning Abyssinia ? If M. Laval was against petrol sanctions his right course was to go to Geneva and say so. And if he failed to see that, it was for Sir Samuel Hoare to make it clear to him. It is not so simple a matter to make an anti-sanction case in public before the Committee of Eighteen as it is to persuade a British Foreign Secretary in the privacy of a Quai D'Orsay salon. But whether the case is good or bad, it is manifestly at Geneva that it should be presented. Instead, the two Ministers preferred, with incredible irrelevance, to leap from petrol to partition. There is no further need to discuss their • plan. It is dead and damned already. Mr. Eden has virtually invited the League Council to reject it and there is little doubt what the Council's response will be. Abyssinia is, of course, outraged by it, but not more so than the public opinion of this country, expressing itself with unprecedented solidarity and conviction by every instrument open to it, notably in the columns of The Times, whose firm and clear leadership at a moment when the country's elected leaders had abdicated their functions demands appreciative recognition. Even Italy is critical—on the ground that her ambitions have been insufficiently considered.

But if the plan is dead the situation created by it remains. The British Cabinet deserves as much sympathy as condemnation. Owing to leakageS in Paris it could not withhold its assent to the plan without deciding on the spot to repudiate the Foreign Secretary. And the younger menibers of the Cabinet have done much to clear the air by their resolute opposition to the proposed peace terms. that is the domestic aspect. The issues at Geneva are of wider import. The whole sanctions policy has been im- perilled, for nations which embarked on it reluctantly but firmly under the inspiration of Sir Samuel Hoare's speech to the League Assembly may well feel them- selves dispensed from their obligations when they see the kind of bargain Great Britain in connivance with France is ready to strike with the aggressor. But that danger may be averted. The sanctions are working, and having an undoubted effect ; a " colonial operation " does not call for the sacrifice of every wedding-ring in Italy,• from the Queen's downward. They ought to he intensified. For League members to be sending petrol from their ports to drive Italian aeroplanes and tanks is a paradox as fantastic as it is deplorable.

But this, it may be argued, is a question of expedi- ency, not principle. It may be considered prudent to yield to Italian threats. The League eould do that, within limits, and survive. Even the existing sanctions will in time •achieve . their purpOse. But as the first step to the rehabilitation of the League, and of this • country in particular, fundamental principles must be reaffirmed. Does, or does not, this country still stand for " the collective mainten ance of the Covenant in its entirety, and particularly for steady and collective resistance • to attacks of unprovoked aggression " Somehow, through some- one's lips—they can no longer be Sir Samuel Hoare's.— assurances must be given which will convince the world that it still does. That formality' is needed; but actually the assurance has been given already with a strength of emphasis and .a depth of conviction which neither friend nor enemy can mistake. The Government' may have blundered, but the country has seen clear and stood fast, •