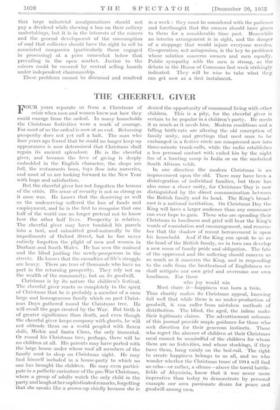 FOUR years separate us from a Christmas of crisis when men and women knew not how they could emerge from the ordeal. In many households the Christmas festivities were a mark of courage. For most of us the ordeal is now at an end. Returning prosperity does not yet call a halt. The man who four years ago feared that he could no longer keep up appearances is now determined that Christmas shall regain its ancient splendour. He is the cheerful giver, and because the love of giving is deeply embedded in the English character, the shops are full, the restaurants hum, toys flow into nurseries, and most of us are looking forward to the New Year with hope and satisfaction.

But the cheerful giver has not forgotten the lessons of the crisis. His sense of security is not so strong as it once was. He knows that the deserving as well as the undeserving suffered the loss of funds and employment, and he is the first to recognise that one half of the world can no longer pretend not to know how the other half lives. Prosperity is relative. The cheerful giver may have tumbled his parcels into a taxi, and submitted good-naturedly to the impediments of Oxford Street, but he has never entirely forgotten the plight of men and women in burham and South Wales. He has seen the maimed and the blind jostling the newly-prosperous in the streets. He knows that the casualties of life's struggle are heavy. There are tens of thousands who have no part in the returning prosperity. They rely not on the wealth of the community, but on its goodwill.

Christmas is by its nature the children's festival. The cheerful giver reacts so completely to the spirit of Christmas that he is probably a member of a once large and homogeneous family which on past Christ- mas Days gathered round the Christmas tree. He will recall the gaps created by the War: But birth is of greater significance than death, and even though the cheerful giver keeps company with ghosts, lie will not obtrude them on a world peopled with flaxen dolls, Mickie and Santa Claus, the only immortal. Or round his Christmas tree, perhaps, there will be no children at all. His parents may have parted with the large house under whose roof all members of the family used to sleep on Christmas night. He may find himself included in a house-party to which no one has brought the children. He may even partici- pate in a pathetic caricature of the pre-War Christmas, where a group of adults watch the only child in the 'party and laugh at her sophisticated remarks, forgetting that she speaks like a crown-up chiefly because she is denied the opportunity of communal living with other children. This is a pity, for the cheerful giver is certain to be popular in a children's party. He needs it as much as it needs him. Modern conditions and a falling birth-rate are altering the old conception of family unity, and greetings that used once to be exchanged in a festive circle are compressed now into three-minute trunk-calls, while the radio establishes a less personal contact with exiled kin by the night fire of a hunting camp in India or on the sunbaked South African veldt.

In one direction the modern Christmas is an improvement upon the old. There may have been a disintegration of individual families, but there has also come a closer unity, for Christmas 'Day is now distinguished by the direct communication between the British family and its head. The King's broad- cast is a national institution. On Christmas Day the King will have a larger audience than any commoner can ever hope to gain. Those who are spending their Christmas in loneliness and grief will hear the King's words of consolation and encouragement, and remem- ber that the shadow of recent bereavement is upon his household. And if the King can speak to us as the head of the British family, we in turn can develop a new sense of family pride and obligation. The fate of the oppressed and the suffering should concern us as much as it concerns the King, and in responding to the calls from the brotherhood of Englishmen we shall mitigate our own grief and overcome our own loneliness. For those Who joy would win Must share it—happiness was born a twin. Thus charity makes its Christmas appeal, knowing full well that while there is no under-production of goodwill, it can suffer from mistaken methods of distribution. The blind, the aged, the infirm make their legitimate claims. The advertisement columns of this journal provide ample guidance for those who seek direction for their generous instincts. Those who regret the absence of children, at their Christmas meal cannot be unmindful of the children for whom there are no festivities, and whose stockings, if they have them, hang vainly on the bed-rail. ' The right to create happiness belongs to us all, and we who wonder whether the Christmas truce' of 1914 will find an echo--or rather, a silence—above the torrid battle- fields of Abyssinia, know that it was never more imperative than today to demonstrate by personal example our own passionate desire for peace and goodwill among men.