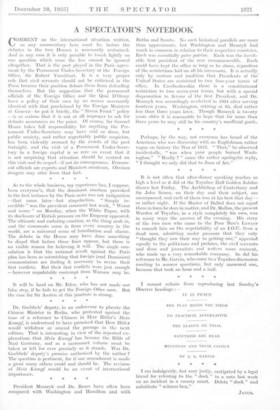 Page 7, 20 December 1935 — President Masaryk and Dr. Benes have often been compared with
Close

President Masaryk and Dr. Benes have often been compared with

Washington and Hamilton and with. Botha and Smuts. No such historical parallels are more than approximate, but Washington and Masaryk had much in common in relation to their respective countries. Each was essentially pater patriae. Each was the inevit- able first president of the new commonwealth. Each could have kept the office as long as he chose, regardless of the restrictions laid on all his successors. It is actually only by custom and tradition that .Presidents of the United States are restricted to two four-year terms of office. In Czechoslovakia there is a constitutional restriction to two seven-year terms, but with a special dispensation in favour of the first President, and Dr. Masaryk was accordingly re-elected in 1934 after serving fourteen years. Washington, retiring at 65, died rather less than three years later. Though Masaryk is twenty years older it is reasonable to hope that for more than three years he may still be his country's unofficial guide.