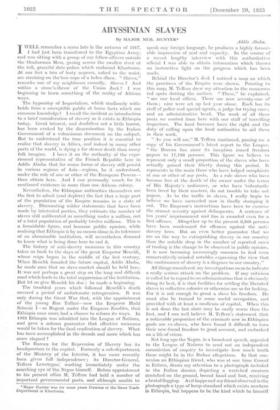 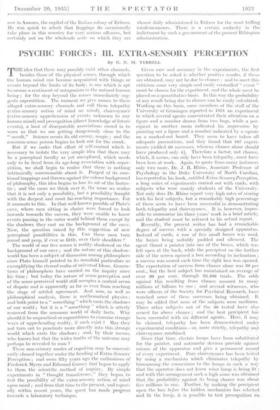 IWELL remember a scene late in the autumn of 1917. I had just been transferred to the Egyptian Army, and was sitting with a group of my fellow-officers outside the Omdurman Mess, gazing across the swollen river at the tall, graceful date-palms which enshroud Khartoum. At our feet a trio of lusty negroes, naked to the waist, are straining on thelow-rope of a laden dhow. " Slaves," remarks one of my neighbours casually. Slaves ? And within a stone's-throw of the Union Jack ? I was beginning to learn something of the reality of African ways.

The hypocrisy of Imperialism, which studiously with- holds from a susceptible public at home facts which are common knowledge 1 I recall the incident as introduction to a brief consideration of slavery as it exists in Ethiopia today. Great interest, and doubtless not a little horror, has been evoked by the dissemination by the Italian Government of a voluminous document on the subject. But to understand the true position it is essential to realise that slavery in Africa, and indeed in many other parts of the world, is dying a far slower death than many folk imagine. I have it on the authority of the expe- rienced representative of the French Republic here in Addis Ababa' that far worse forms of slavery still persist in various regions of Asia—regions, be it understood, under the rule of one or other of the European Powers— than obtain here. And I can personally vouch for its continued existence in more than one African colony.

Nevertheless, the Ethiopian authorities themselves are the first to admit (and deplore) the fact that a large part of the population of the Empire remains in a state of slavery. Discounting wilder statements that have been made by interested parties, they estimate the number of slaves still unlibcrated as something under a million, out of a total population of probably twelve millions. This is a formidable figure, and humane public opinion, while realising that Ethiopia is by no means alone in its tolerance of an abominable institution, will nevertheless demand to know what is being done here to end it.

The history of anti-slavery measures in this country takes us back to the days of the great Emperor Menelik, whose reign began in the middle of the last century.. When Menelik founded the future capital, Addis Ababa, he made sure that no slave-market should be held here. It was not perhaps a great step on the long and difficult road which leads to the total suppression of the institution. But let us give Menelik his due : he made a beginning: The troubled years which followed Menelik's death covered a period of unfortunate retrogression. It was only during the Great War that, with the appointment of the young Has Taffari—now the Emperor Haile Selassie I—as Regent under the Empress Zauditu, that Ethiopia once more had a chance to reform its ways. In 1928 Ethiopia was admitted. into the League of Nations, and gave a solemn guarantee that effective measures would be taken for the final eradication of slavery. What has been accomplished in the decade and more which has since elapsed ?

The Bureau for the Repression of Slavery has its headquarters in the capital. Formerly a sub-department of the Ministry of the Interior, it has more recently been given full ' independence ; its Director-General, Teffera Lewetegne,' working 'immediately under the searching eye of the Negus himself. Before appointment to his present °like M. Teffera had held a number of important governmental posts, and although unable to '0 Major Hunter was for some years Director of the Slave Trade Department in Khartoum. speak any foreign language, he produces a highly favour- able impression of zeal and capacity. In the course of a recent lengthy interview with this authoritative official I was able to obtain information which throws an instructive light on the progress which has been Made.

Behind the Director's desk I noticed a map on which, the provinces of the Empire were shown. Pointing to this map, M. Teffera drew my attention to the numerous red spots dotting the surface. " These," he explained, " are our local offices. There are now seventy-one of them ; nine were set up last year alone. Each has its staff of police and special agents, a judge for trying cases, and an administrative head. The work of all these posts we control from here with our staff of travelling inspectors. The local bureaux have the right and the duty Of calling upon the local authorities to aid them in their work.

" As you will see," M. Teffera continued, passing me a copy of his Government's latest report to the League, " the Bureau has since its inception issued freedom • papers to 17,193 persons. This figure we believe to represent only a small proportion of the slaves who have actually gained their liberty during this period. It represents in the main those who have lodged complaints at one or other of our posts. As a rule slaves who have become free at the death' of the owner under the terms of His Majesty's ordinance, or who have 'voluntarily been freed by their masters, do not trouble to take out papers. As to the traffic in slaves, I really begin to believe we have • succeeded now in finally stamping it out. The Emperor's instructions have been to exercise the utmost severity against delinquents. A sentence of ten years' imprisonment and fine is awarded even for a first offence. Altogether up to the present 3,868 persons have been condemned for offences against the anti- slavery laws. But an even better guarantee that we are on the way to extinguishing slavery in our country than the notable drop in the number of reported cases of trading is the change to be observed in public opinion. It is now becoming increasingly common to find even conservatively-minded notables expressing the view that the continuance of slavery is a disgrace to our country."

All things considered, my investigations seem to indicate a really serious attack on the problem. If any criticism is called for in regard to an administration that is obviously doing its best, it is that facilities for settling the liberated slaves in collective colonies or otherwise arc so far lacking.. For it is not enough to grant a slave his freedom. He must also be trained to some useful occupation, and provided with at least a modicum of capital. When this is not done the last state may be easily worse than the first, and I can well believe M. Teffera's statement that a noticeable proportion of the criminals now in Ethiopian gaols are ex-slaves, who have found it difficult to turn their new-found freedom to good account, and embarked on a life of crime.

Not long ago the Negus, in a broadcast speech, appealed to the League of Nations to .send out an independent commission of enquiry to investigate how much truth there might be in the Italian allegations. In that con- nexion an Ethiopian friend, who was at one time Consul in Eritrea, draWs• my attention to a photograph included in the Italian dossier, depicting a wretched creature stretched on the ground, bound hand and foot, receiving a brutal flogging. As:it happened my friend observed in the photograph a type of lamp-standard which exists nowhere in Ethiopia, but happens to be the kind which he himself saw in Asmara, the capital of the Italian colony of Eritrea. He was quick to admit that floggings do occasionally take place in this country for very serious offences, but certainly not on the wholesale scale on which they are almost daily administered in Eritrea for the most trifling misdenicanours. There is a certain audacity in the indictment by such a government of the present Ethiopian administration.