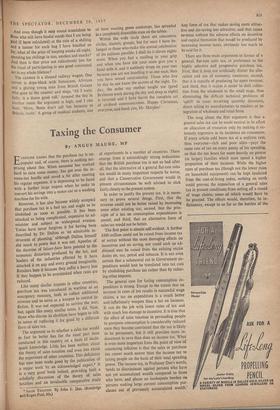 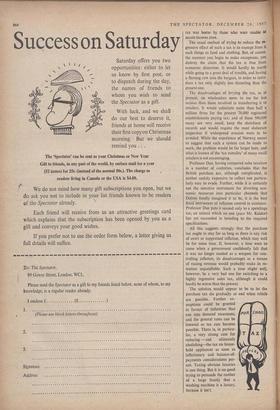 By' ANGUS MAUDE, MP EVERYONE knows that the purchase tax is un- popular and, of course, there is nothing sur- prising about this. When someone has worked hard to earn some money, has got over the in- come-tax hurdle and saved a .bit after meeting his regular expenses, it is depressing to be faced With a further large impost when he seeks to convert his savings into a motor-car or a washing machine for his wife.

However, it has also become widely accepted that purchase tax is a bad tax and ought to be abolished as soon as possible. It has been attacked as being complicated, expensive to ad- minister and subject to widespread evasion. Tories have never forgiven it for having been described by Dr. Dalton as 'an admirable in- strument of planning,' although Dalton himself did much to prove that it was not. Apostles of the doctrine of laisser-faire have pointed to the economic distortion produced by the tax, and leaders of the industries affected by it have attacked it on any and every ground imaginable. Retailers hate it because they suffer a heavy loss if they happen to be overstocked when rates are reduced. Like many similar imposts in other countries, purchase tax was introduced in wartime as an emergency measure, both to collect additional revenue and to serve as a weapon to control in- flation. It was not expected to survive the war; but, again like many similar taxes, it did. Now, those who discuss its abolition have begun to talk in terms of replacing it for good by a different form of sales tax. The argument as to whether a sales tax would in fact be better has for the most part been conducted in this country on a basis of inade- quate knowledge. Little has been written about the theory of sales taxation and even less about the experience of other countries. This deficiency has now been made good by the publication of a major work by an acknowledged expert.* It is a very good book indeed, providing both a scholarly discussion of the theory of sales taxation and an invaluable comparative study * SALES TAXATION. By John F. Due. (Routledge and Kcgan Paul, 40s.) of experiments in a number of countries. There emerge from it astonishingly strong indications that the British purchase tax is not so bad after all, that the alternative of a general flat-rate sales tax would in many important respects be worse, and that a Conservative Government would in present circumstances be well advised to stick fairly closely to the present system.

In order to justify the present tax, it is neces- sary to prove several things. First, that the revenue could not be better raised by increasing some other existing tax; second, that the prin- ciple of a tax on consumption expenditures is sound; and third, that an alternative form of sales tax would not be better.

The first point is almost self-evident. A further £400 million could not be raised from income tax or surtax without the most damaging effects on incentives and on saving, nor could such an ad- ditional sum be raised from the existing excise duties on, say, petrol and tobacco. It is not even certain that a substantial cut in Government ex- penditure would best be translated into tax cuts by abolishing purchase tax rather than by reduc- ing other imposts.

The general case for taxing consumption ex- penditure is strong. Except to the extent that an increase in rates of tax results in successful wage claims, a tax on expenditure is a much better anti-inflationary weapon than a tax on incomes. It can do the job with lower rates of tax and with much less damage to incentive. It is true that the effect of sales taxation in persuading people to postpone consumption is considerably reduced once they become convinced that the tax is likely to be permanent, but it still provides more in- ducement to save than does an income tax. What is even more important from the point of view of countering inflation is that the sales or purchase tax comes much nearer than the income tax to taxing people on the basis of their total spending power. The income tax, in Professor Due's words, 'tends to discriminate against persons who have not yet accumulated wealth compared to those who have, and places an inadequate burden on persons making large current consumption pur- chases out of previously accumulated wealth.' Any form of tax that makes saving more attrac- tive and dis-saving less attractive, and that raises revenue without the adverse effects on incentive and capital formation that would be produced by increasing income taxes, obviously has much to be said for it.

There are three main arguments in favour of 1. general, flat-rate sales tax, in preference to the highly selective and progressive purchase tax. First, that it does not artificially distort the allo- cation and use of economic resources; second, that it is capable of producing far more revenue; and third, that it makes it easier to shift collec- tion from the wholesale to the retail stage, thus eliminating the difficult technical problems of `uplift' in cases involving quantity discounts, direct selling by manufacturers to retailers or in- tegration of wholesale and retail firms.

The snag about the first argument is that a general sales tax can be made neutral in its effect on allocation of resources only by making it ex- tremely regressive in its incidence on consumers. If every article sold bears tax at a uniform rate, then everyone—rich and poor alike—pays the same rate of tax on every penny of his spending, so that the tax bears far more heavily on poorer (or larger) families which must spend a higher proportion of their incomes. While the higher rates of purchase tax (though not the lower rates on household equipment) can be kept insulated from the cost-of-living index, nothing on earth could prevent the imposition of a general sales tax in present conditions from setting off a round of wage claims, some of which would have to be granted. The effects would, therefore, be in- flationary, except in so far as the burden of the tax was borne by those who were unable to secure income rises.

The usual method of trying to reduce the re- gressive effect of such a tax is to exempt from it such things as food and clothing. But, of course, the moment you begin to make exceptions, you destroy the claim that the tax is free from economic distortion. It would hardly be worth while going to a great deal of trouble, and having a flaming row into the bargain, in order to intro- duce a tax only slightly less distorting than the present one.

The disadvantages of levying the tax, as at Present, on wholesalers seem to me far less serious than those involved in transferring it to retailers. It would substitute more than half a million firms for the present 70,000 registered establishments paying tax; and of these 500,000 many are very small, keep the sketchiest of records and would require the most elaborate inspection if widespread evasion were to be avoided. While the experience of Norway seems to suggest that such a system can be made to work, the problem would be far larger here, and what is known of the 'tax morality' of many small retailers is not encouraging.

Professor Due, having compared sales taxation in a number of countries, concludes that the British purchase sax, although complicated, is neither unduly expensive to collect nor particu- larly easy to evade. Further, while it is certainly not the sensitive instrument for diverting eco- nomic resources into particular channels that Dalton fondly imagined it to be, it is the best fiscal instrument of inflation control in existence. Professor Due puts it second only to a spendings tax, an animal which no one (pace Mr. Kaldor) has yet succeeded in breeding to the required specifications.

All this suggests strongly that the purchase tax ought to stay for as long as there is any risk of overt or suppressed inflation, which may well be for some time. If, however, a time were to come when a government confidently felt that it was no longer needed as a weapon for con- trolling inflation, its disadvantages as a means of raising revenue would probably make its re- tention unjustifiable. Such a time might well, however, be a very bad one for switching to a highly regressive sales tax, although it could hardly be worse than the present.

The solution would appear to be to let the purchase tax die gradually as and when reliefs are possible. Further ex- emptions could be granted in favour of industries that run into demand recessions, and the general rates can be lowered as tax cuts become possible. There is, in particu- lar, a very strong case for reducing — and ultimately abolishing—the tax on house- hold appliances as soon as inflationary and balance-of- payments considerations per- mit. Taxing obvious luxuries is one thing. But it is no good trying to persuade the mother of a large family that a washing machine is a luxury, because it isn't.