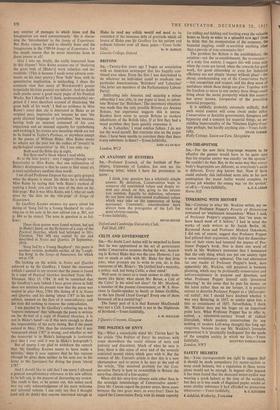 CELTS AND GOVERNMENT Sta,—No doubt Lord Attlee will be surprised

to learn that he was apprenticed to the art of government under Conservative auspices during the war. Accord- ing to Robert Blake that was the case. However, I am not so much at odds with Mr. Blake for that little joke; what prompts me to write to you, sir, is this statement of Mr. Blake's : 'He [Attlee] had a majority, a policy, and, not being Celtic, a clear mind.'

Well now, to resort to a stock answer to silly state- ments like these; what about Mr. Bevan, a Celt of the Celts? Is his mind not clear? Or Mr. Macleod, a member of the present Government, or W. S. Mor- rison (a Gaelic-speaker to boot), or James Griffiths, or the late David Lloyd George? Every one of them bemused; all in a mental fog?

The funny part of it is that Ramsay MacDonald was not a Celt. Lossiemouth is not in the Highlands of Scotland.—Yours faithfully, A. M. MACLEAN 5 Queen's Crescent, Glasgow