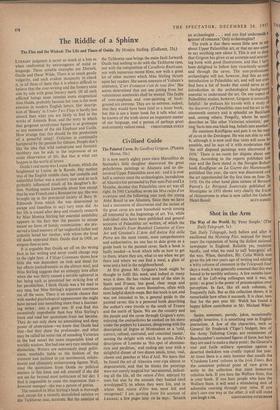 The Riddle of a Sphinx

The Fine and the Wicked: The Life and Times of Ouida. By Monica Stirling. (Gollancz, 21s.) LITERARY judgment is never so much at a loss as when confronted by extravagance of mind or language. Three notable examples are Disraeli, Ouida and Oscar Wilde. There is so much gaudy vulgarity, and such evident incapacity to check it, in all three of them that it is always difficult to believe that the over-writing and the foolery exist side by side with great literary merit. Of all such afflicted beings none remains more enigmatical than Ouida, probably because her case is the most extreme in modern English letters. Her descrip- tion of 'Beauty' in Under Two Flags is hardly less absurd than what you are likely to find in the works of Amanda Ross, and the story in which that gorgeous cavalryman figures is as grotesque as any nonsense of the old Elephant and Castle. How strange that this should be the production of a powerful mind! Criticism is continually hampered by the passion for tidiness. People don't like the idea that wild melodrama and fantastic snobbery can be aids to the expression of an acute Observation of life. But that is what can happen in the world of letters.

Ouida's real name was Louise Ramee, which she heightened to Louise de la Ramee. Her mother was of the English middle class, her unstable and unfaithful father was a mystery man and as such probably influenced much of his daughter's fic- tion. Nothing seems knowable about him except that he was French and a Bonapartist spy. She was brought up in the provincial society of Bury St. Edmunds from which she was determined to escape and (needless to say) very soon did. As her life is traced after deep and masterly research by Miss Monica Stirling her essential amiability appears in the fact that the passion to escape meant no form of family renunciation : she pre- served a fond memory of her neglectful father and ardently loved her mother, with whom she lived till death separated them. Ouida died in 1908, an enigma then as now.

It is arguable that Ouida set off on the wrong foot in her writing and never could change step to the right foot. A Village Commune shows how little she was dependent on tosh and tinsel for her effects (melodramatic as she always was), and Miss Stirling suggests that an unhappy love affair when she was thirty caused a terrible upheaval in her being such as prevented her striking free of her peculiarities. I think Ouida was a bit mad in any case, but Miss Stirling's argument convinces me all the same. There is an outside chance that with needed psychological appeasement she might have turned into something more than a fascinat- ing writer : into a .great one. If you find this excessively improbable then buy Miss Stirling's book and read her quotations froM her heroine. They do not only show an astonishing and deep

power of observation—we know that Ouida had that—but they show the profounder, and what may be called (at some risk of sounding Victorian in the bad sense) the more respectable kind of worldly wisdom. She had one very rare intellectual

cians, morbidly liable to the fashion of the moment and inclined to cut sentimental, exhibi- tionist and ultimately embarrassing figures. Well, read the quotations from Ouida on political matters in this book and ask yourself if she did

not see far beyond most politicians of her day. I find it impossible to resist the impression that— however manqué—she was a person of genius.

The research in Miss Stirling's book is thorough and, except for a recently demolished opinion on the Tichborne case, accurate. But the mention of

the Tichborne case brings the main fault forward. Ouidu had nothing to do with the Tichborne case, nor with the composition of Cavalleria Rusticana, nor with numerous recent films, nor with a great lot of other matters which Miss Stirling thrusts upon her readers. She seems unaware of Voltaire's utterance, `L'art d'ennuyer c'est de tout dire.' She seems determined that not one jotting from her voluminous notebooks shall be wasted. The faults of over-emphasis and over-painting of back- ground are extreme. They are so extreme, indeed, that they would have been fatal to a lesser book, but this is not a lesser book for it tells what can be known of the truth about an important master of our language, and a person of perhaps great and certainly valiant mind. CHRISTOPHER SYKES