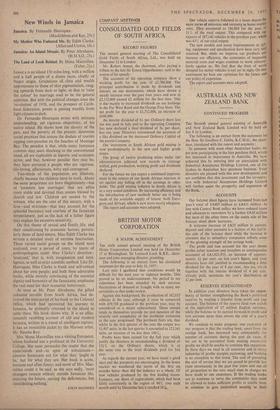 (MacGibbon and Kee, 25s.) My Mother Who Fathered Me. By Edith Clarke. (Allen and Unwin, 18s.) Jamaica: An Island Mosaic. By Peter Abrahams. (H.M.S.O., 25s.) The Land of Look Behind. By. Mona Macmillan. (Faber, 21s.) JAMAICA is an island 150 miles long, with a million and a half people of a dozen races, chiefly of Negro origin. Gradations of, class and wealth approximate to those of skin pigmentation, rang- ing upwards from dark to light; so that to 'raise the colour' by. marriage used to be the general ambition. But with the political changes since the 'revolution' of 1938, and the prospect of. Carib- bean federation, power is passing steadily from light citizens to dark.

Dr. Fernando Henriques writes with intimate understanding, yet rigorous objectivity, of his native island. He shows how the slavery of the past, and the poverty of the present, determine social practices that arouse the disdain of tourists sipping rum-punches on the beaches of Montego Bay. The paradox is that, while many Jamaican customs May seem shocking to the conventional mind, all are explicable in historic and economic terms; and that, however peculiar they may be, they have nurtured a people who are vigorous, life-loving, affectionate, witty and courageous.

Two-thirds of the population are illiterate, chiefly because the children have to work. About the same proportion are born illegitimately—but of 'common law marriages' that are often more stable and devoted than unions blessed by church and law. Children are tended by the women, who are the core of this society, with a love—and strictness—that may account for the splendid buoyancy and courtesy of the Jamaican temperament; just as the lack of a father figure may explain the excessive sensitivity.

On this theme of sexual and family life, and their conditioning by economic factors, particu- larly those of land tenure, Miss Edith Clarke has written a detailed study of extreme fascination. Three varied social groups on the island were analysed, over a period of years, by teams of anthropologists under Miss Clarke's direction : 'analysed,' that is, with imagination and intel- ligence, as well as strict scientific method. Like Dr. Henriques, Miss Clarke is frank and self-critical about her own people; and both these admirable books, while entirely convincing of the essential dignity and humanity of the Jamaicans, emphasise the vast need for their economic betterment.

As soon as Mr. Peter Abrahams, the gifted coloured novelist from South Africa, had de- livered the manuscript of his book to the Colonial Office, which had sponsored his journey to Jamaica, he promptly returned to the island to settle there. His book shows why. It is an affec- tionately rambling account of old and modern Jamaica, written in a mood of intelligent rapture. It has an irresistible jacket by the Maroon artist, Mr. Namba Roy.

Mrs. Mona Macmillan was a visiting European, whose husband was a professor at the University College. She soon persuades the reader that she understands and—in spite of tribulations— admires Jamaicans not for what they 'ought to be,' but for what they are. Her book is acute, humane and often funny; and never of Mrs. Mac- millan could it be said, as she says sadly, 'most strangers remain entirely outside Jamaican life, enjoying the leisure, cursing the deficiencies, but contributing nothing.'