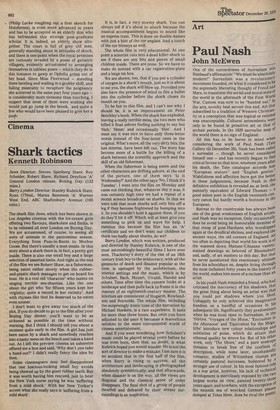 The shark film Jaws, which has been shown, in , Los Angeles cinemas with the ice-cream girls , offering two flavours, sharkolate and finilla, is . to be released all over London on Boxing Day. _ We are accustomed, of course, to seeing all sorts of animals in the pantomime season. Everything from Puss-in-Boots to Mother Goose. But there's usually a man inside. In this story about a shark there is, in fact, a pretty girl inside. There is also one small boy and a large , selection of assorted limbs. And right at the end , of the film we see Robert Shaw, as a fisherman, , being eaten rather slowly when the rubber, and-plastic shark manages to get on board his boat. He is a real old 'character' who insists on singing terrible sea-shanties. Like the one about the girl who 'for fifteen years kept her virginity; quite a record in her vicinity'. And with rhymes like that he deserved to be eaten even sooner.

I don't want to give away too much of the

• plot. If you do decide to go to the film after your . Boxing Day dinner, you'll want to be as sickened as possible at the time without , warning. But I think I should tell you about a moment quite early in the film. A girl has just been eaten by a shark and somebody reaches into a nasty mess on the beach and takes a hand out. As I left the preview cinema an usherette offered me a box and said, 'Why don't you take a hand-out?' I didn't really fancy the idea by then.

Some cinemagoers may feel disappointed that one luscious-looking small boy avoids being chewed up by the giant rubber teeth. But it was worth having him rescued, just to hear the New York nurse saying he was 'suffering . from a mild shock.' With her New Yorker's accent what she really says is 'suffering from a mild shark'. It is, in fact, a very stormy shark. You can always tell if it's about to attack because the musical accompaniment begins to sound like an express train. This is done on double-basses with just a hint of the cor anglais. And a touch of the cor blimeys as well.

The whole film is very educational. At one point a scientist cuts into a dead killer-shark to see if there are any bits and pieces of small children inside. There are none. So we have to make do instead with a car registration-plate and a large tin box.

We are shown, too, that if you put a cylinder of oxygen in a shark's mouth, just as it is about to eat you, the shark will blow up. Provided you also have the presence of mind to fire a bullet into the cylinder before the shark closes its mouth on you.

To be fair to this film, and I can't see why I should be, it is an improvement on Peter Benchley's book. When the shark has exploded, leaving a really terrible mess, the two men who killed it float ashore finding nothing to say but 'Hah,"Hmm' and occasionally 'Hee'. And I must say it was nice to have only three-letter words instead of the four-letter ones in the original. What's more, all the very dirty bits, the lust interest, have been left out. The story has become more of a battle for the killing of a shark between the scientific approach and the skill of an old fisherman.

When the fisherman is being eaten and the other characters are drifting ashore, at the end of the picture, one of them says 'Is it Wednesday?' And the other says 'No. I think it's Tuesday'. I went into the film on Monday and came out thinking that, whatever day it was, it was certainly high time we had a repeat of a recent science broadcast on sharks. In this we were told that most sharks will only bite off a leg if they become frightened by bumping into it. So you shouldn't hold it against them. If you do they'll bit it off. Which will at least give you something to pick up and wave for help. 1 mention this because the film has an 'A' certificate and we don't want our children to think too badly about sharks, do we?

Barry Lyndon, which was written, produced and directed by Stanley Kubrick, is one of the most astonishingly-beautiful films I have ever seen. Thackeray's story of the rise of an 18th century Irish boy to the aristocracy, with all the gimmicks of death and disaster popular at the time, is upstaged by the architecture, the interior settings and the music, which is by Schubert, Bach, Mozart, Vivaldi, Handel and others. Time after time the camera looks at a landscape and then pulls back to frame it in the manner of an eighteenth-century master. The interiors are reminiscent of Hogarth. Rowlandson and Reynolds. The whole film, including the surprisingly ironic tone of the narration by Michael Hordern, is a rare experience. It lasts for more than three hours. But once you have adjusted to the pace it becomes a marvellous antidote to the more conventional world of Cinema entertainment.

And if you were wondering how Schubert's music could be played several years before he was even born, then that, no doubt, is what Kubrick hoped you would wonder. He is not the sort of director to make a mistake. I am sure it is no accident that in the first half of the film, when Barry is rising to success, all the architecture and landscaping is photographed absolutely symmetrically; and that afterwards, when disaster is on the way, all the views are diagonal and the classical sense of order disappears. The final shot of a group of people dwarfed and defeated by their ornate surroundings is an inspiration.