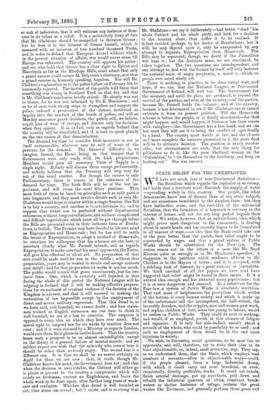 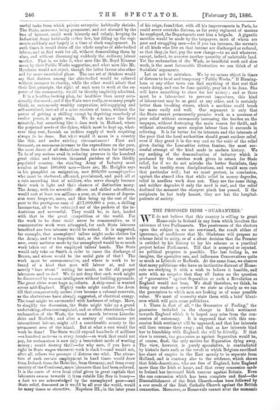 STATE RELIEF FOR THE UNEMPLOYED.

WE have not much fear of true Continental Socialism— the Socialism which regards the capitalist as an enemy, and holds that a reservoir must .diminish the supply of water

—spreading widely in this country. Our people, like other democracies, know less of finance than of any other subject, and are sometimes bewildered by the simplest facts ; but they have instinctive sense, and the root-idea of the anti-social Socialism, that the formation of a haystack is contrary to the interest of horses, will not for any long period beguile their minds. We notice, however, that an extraordinary idea, which. might prove most dangerous to the community, is floating about in men's heads, and has recently begun to be formulated in all manner of ways,—an idea that the State could take care of the poor better than the parish, that relief ought to be superseded by wages, and that a grand system of Public Works should be substituted for the Poor-law. The notion comes out in the letters of a man like Mr. Boyd Kinnear quite as strongly as in Mr. Hyndman's speeches ; it reappears in the petitions which workmen address to Mr. Childers or to the Mayors of towns ; and it is accepted, with a sidelong look of distrust, by a great number of journalists. We think one-half of all the papers we have read have suggested that relief might be found in State canals. It is a natural idea enough, and has attracted many populations ; but it is at once dangerous and unsound. As a substitute for the Poor-law, a system of Public Works is absolutely worthless.

That vast mass of helplessness, the precipitate which settles at the bottom of every human society, and which is made up of the unfortunate and the incompetent, the half-witted, the incurably drunken, and the cripples, men and women past work, and orphan children of both sexes too young to labour, would be useless on Public Works. They could do next to nothing, and would, if so employed, perish in this climate of fatigue and exposure. It is only the able-bodied, usually about a seventh of the whole, who could by possibility be so used ; and such an employment of them would be in the end most injurious to society.

We wish, in discussing social questions, to be moat fair to opponents, and will, therefore, try to state their idea in its least objectionable, or, indeed, most attractive, way. They say, as we understand them, that the State, which employs vast numbers of servants—often in objectionable ways—could, if the people pleased, form a large Industrial Army, with which it could carry out most beneficial, or even, occasionally, directly profitable, works. It could cut canals, finish arterial drainage, put up aqueducts, pull down and rebuild the industrial quarters of cities, construct break- waters to shelter harbours of refuge, reclaim the great wastes like Dartmoor, and generally perform those great and useful tasks from which private enterprise habitually shrinks. The State, moreover, being permanent, and not alarmed by the loss of interest, could work leisurely and calmly, keeping its Industrial Army habitually rather low, but filling up the regi- -ments suddenly and largely in a time of slack employment. In such times it would drain off the whole surplus of able-bodied labour, and so find work for all, without demoralising them by alms, and without disarranging suddenly the ordinary labour market. That is, we take it, what men like Mr. Boyd Kinnear -mean by their Public Works suggestion, and what men like Mr. Hyndman would not reject, though the latter favour also other and far more anarchical plans. The one set of thinkers would say that distress among the able-bodied would be relieved without recourse to charity, while the other would admit that their first principle, the right of each man to work at the ex- pense of the community, wo'ald be thereby implicitly admitted.

It is a healthy-looking plan, far healthier than many occa- sionally discussed; and if the State were really, as so many people think, an enormously wealthy corporation, self-supplying and self-sustained, instead of a mere receiver of taxes, without the power of getting a shilling except by depriving somebody of twelve pence, it might work. We do not know the facts minutely, but something like it does work in Holland, where the perpetual needs of the dykes, which must be kept up, what- ever they cost, furnish an endless supply of work requiring always to be done. But what would it mean in a country like this, and under existing circumstances ? First and foremost, an enormous increase to the expenditure on the poor, the most direct of all deductions from the return for industry. To be of any serious avail-in-reducing pressure in the hundred great cities and thirteen thousand parishes of this thickly populated country, the standing Army of Industry must number at least 100,000 men—there are, Mr. Hodgkin says in his pamphlet on emigration, now 200,000 unemployed— who must be sheltered, officered, provisioned, and paid, all at a rate exceeding that of soldiers, who serve cheaply because .their work is light and their chances of distinction many. The Army, with its scientific officers and skilled sub-officers, would cost at least ten millions a year, or, if seasons of depres- sion were frequent, more, and thus bring up the cost of the ,poor to the prodigious sum of £17,000,000 a year, a shilling Income-tax, all to be extracted out of the pockets of the in- dustrious and successful. They would be, in fact, loaded with that in the great competition of the world. For the work to be done could never be remunerative, as if remunerative work were attempted, for each State labourer benefited one free labourer would be ruined. It is suggested, for example, that unemployed tailors might make clothes for the Army, and it 18 forgotten that, as the clothes are made 20w, every uniform made by the unemployed would be so much work taken out of the employed tailors' hands. The State would only take on Smith in order to cause the discharge of Brown, and where would be the social gain of that ? The work must be unremunerative, and where is work to be found of a kind that men will labour at, and not merely "laze about" waiting for meals, as the old pauper labourers used to do ? We do not deny that such work might be discovered by human intelligence without building pyramids. The great cities want huge aqueducts. A ship-oanal is wanted across mid-England. Mighty works might confine the Avon till that comparatively useless river became a colossal reservoir, as the electricians have already suggested, of electrical energy. The coast might be surrounded with harbours of refuge. More, to simplify the discussion, the State might take up a grand undertaking, often contemplated, and as often abandoned,—the reclamation of the Wash, the broad marsh between Lincoln- shire and Norfolk ; and after a century of continuous yet intermittent labour, might add a considerable county to the 'permanent area of the island. But at what a cost would the work be done! The State would expend hundreds of millions —a hundred millions in every decade—on work that could not pay, for reclamation is now only a benevolent mode of wasting money ; would destroy thrift—for why save, if you have a right to State wages whenever work is slack ?—and would not, after all, relieve the pressure of distress one whit. The attrac- tion of such certain employment in hard times would draw from Ireland, from the Hebrides, from Germany, and from every country of the Continent, more labourers than had been relieved. It is the curse of even local relief given in great capitals that labourers swarm towards it from outside like flies-to honey- s fact we see acknowledged by the unemployed poor—and 13t,a,te relief, discussed as it would be all over the- worldovould be many times as attractive. Napoleon III., in the later years

of his reign, found that, with all his improvements in Paris, he could never overtake distress, as for every regiment of masons he employed, the Departments sent him a brigade. A gigantic sacrifice would be made by the taxpayers, most of whom are poor and struggling men—for if you tax incomes, the servants of all kinds who live on that income are discharged or reduced, so that they, in fact, pay the new charge—to no end whatever, except, indeed, to uncover another quantity of unlettable land. Yet the reclamation of the Wash, as beneficial work and slow work, is the most favourable illustration we can think of of Socialists' arguments.

Let us not be mistaken. We by no means object in times of distress to local and temporary "Public Works." If Birming- ham or any other town can find anything of that sort that wants doing, and can be done quickly, pray let it be done. She will have something to show for her money ; and as there must be a labour-test to prevent imposture, this kind of labour-test may be as good as any other, and is certainly better than breaking stones, which a machine could break far more easily and well. Our argument is only that the State cannot permanently promise work as a measure of poor relief without enormously increasing the burden on the taxpayer, without destroying the main reason for thrift, and without attracting more surplus labour than it succeeds in relieving. It is far better for its interests and the interests of the poor that the local authorities should grant outdoor relief, even if they grant it in the way and on the scale of the relief given during the Lancashire cotton famine, the most suc- cessful attempt of the kind made in modern history. We say nothing of the demoralisation of industry which is produced by the careless work given in return for State relief, for if we do not mistake the better Socialists, they would be terribly stern disciplinarians, and would soon cure that particular evil ; but we must protest, in conclusion, against the absurd idea that while relief in money degrades, relief in needless work does not. They are the same thing, and neither degrades if only the need is real, and the relief declined the moment the sharpest pinch has passed. If the recipients be but truly honest, they are but the hospital- patients of society.