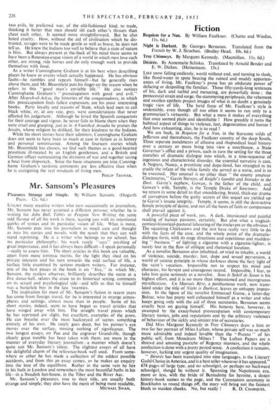 Pleasures Strange and Simple. By William Sansom. (Hogarth Press. 12s. 6d.) UNLIKE many creative writers who turn occasionally to journalism, Mr. Sansom has never assumed a different persona; whether he is writing for John Bull, Titbit.% or Penguin New Writing the same odd flavour of all his work is there, teasing you with its intentional quirks of syntax and its particular vision of life. What is more, Mr. Sansom puts into his journalism as much care and thought as into his stories and novels, with the result that they can well stand reprinting. He is a writer who belongs to no school, has no particular philosophy; his work rarely "says" anything of great importance, and it has always been difficult—I speak personally —really to assess him. The short articles in this book are valuable, apart from more intrinsic merits, for the light they shed on his private interests and his turn towards the odd surface of life, a surface little examined by serious modern writers. For instance, one of the best pieces in the book is on "Jive," in which Mr. Sansom, the restless observer, brilliantly describes the scene at a Jive dance-hall, relates the craze to its historical setting, comments on its sexual and psychological side—and tells us that he himself was a banjolele boy in the late 'twenties.

The inspiration for most of Mr. Sansom's fiction in recent years has come from foreign travel, for he is interested in strange atmos- pheres and settings, almost more than in people. Some of his short stories, indeed, seem to have begun as travel articles that have winged away with him. The straight travel pieces which he has reprinted are slight, but excellent, examples of the genre. He can breathe over the most hackneyed of scenes something entirely of his own. He rarely goes deep, but his painter's eye moves over the surface, missing nothing of significance. The two longest essays, on Poe and the engraver Grandville, though clearly great trouble has been taken with them, are more in the manner of everyday literary journalism—a manner which doesn't quite suit Mr. Sansom's talent. The slightest essays of all have the delightful charm of the reference-book well used. From some- where or other he has made a collection of the oddest possible accidents, and from this an essay comes, or he makes an enquiry into the lore of the equilibrist. Rather in the same vein he lies in his bath in London and remembers the most beautiful baths in his life—in a Swedish hot-house, in the Tiber and the River Aar.

Mr. Sansom's pleasures, true to their title, are usually both strange and simple; they also have the merit of being most readable.