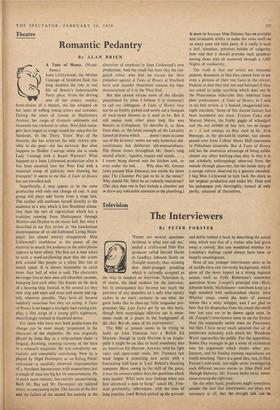 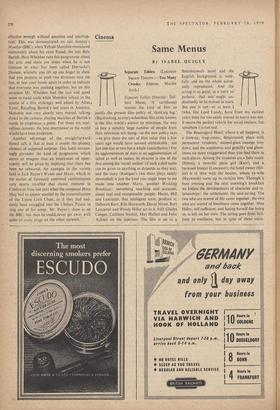 By PETER FORSTER 'THERE are several questions involved in what you ask me,' smiled a crafty-eyed little film producer called Harold Hecht at Geoffrey Johnson Smith on Tonight recently, thus resisting that multi-pronged prodding which is currently accepted as the way to conduct an interview. Television is, of course, the ideal medium for the interview, but in consequence has become too much the province of any smoothie on a sofa who merely cashes in on one's curiosity to see what the guest looks like in close-up; little magazine pro- grammes like Late Extra get by on this basis, though here surprisingly effective use is some- times made of a piano in. the background of the chat. But oh, some of the interviewers!

The BBC at present seems to be trying to build up John Freeman into a British Ed Murrow, though in truth Murrow is so Anglo- phile it might be an idea to build somebody into an American Ed Murrow. Anyway, with his light voice and open-razor smile, Mr. Freeman last week began a promising new series with a fascinating half-hour in Lord Birkett's daunting company. Here, owing to the skill of the guest, it was the answers rather than the questions which were loaded. 'What were your feelings when you first sentenced a man to hang?' asked Mr. Free- man pertinently; whereupon, with the ease of Lung LAnu DU IFLGLL kii1.11GU Up &UV 51 VilaUW and deftly lobbed it back by describing the actu case, which was that of a traitor who had give away a convoy. But one wondered whether h Lordship's feelings could always have been happily unambiguous.

Most of our younger interviewers seem to 1 of middle-class and university background, whit gives all the more impact to a strong region accent, such as Fyffe Robertson's somewhi querulous Scots. Tonight's principal trio—Har Johnson Smith, Michelmore—somehow keep up high standard with undiminished charm. Ala Whicker snaps round the heels of unusw stories like a witty whippet, and I am glad t hear that his despatches from his round-the-wort tour last year are to be shown again soon. I all, Tonight's interviewers seem to me far than the supposedly senior team on Panoram but then I have never much admired that air ponderous animosity with which Mr. Woodro Wyatt approaches his public. For the oppositio Robin Day manages to get a sense of excitemei into his arguments which eludes other pe formers, and his Sunday evening inquisitions ai worth watching. There is.a good idea, too, in Da Farson's mid-week, late-night series investigatir, such different success stories as Alan Dick an Shelagh Delaney; Mr. Farson barks away, some times even up the right tree.

On the other hand, producers might sometimes ponder the fact that interviewers are often not necessary at all, that the straight talk can bo effective enough without question and interrup- tion: This was demonstrated on last Sunday's Monitor (BBC), when Yehudi Menuhin reminisced memorably about his close friend, the late Bela Bartok. Huw. Wheldon runs this programme about the arts, and there are times when he is not immune to what has been called Horrocks's Disease, whereby you lift up one finger to show that you propose to push two divisions into the line, or tear your hands apart in order to indicate that everyone was pushing together; but on this occasion Mr. Wheldon had the tact and good sense to stand aside while Menuhin talked, in the course of a film strikingly well edited by Allan. Tyrer. Recalling Bartok's last years in America, Menuhin was very clearly very moved, talking direct to the camera, playing snatches of Bartok's music to emphasise a point. For those ten mar- vellous minutes. the best interviewer in the world would have been irrelevant.

Another advantage of ,the straightforward filmed talk is that at least it avoids the phoney element of supposed surprise. This habit increas- ingly pervades the kind of programme which seems to imagine that an impression of spon- taneity will be given by implying that there has been no rehearsal. An example in the variety field is Jack Payne's Words and Music, which in the matter of fatuously contrived confrontation very nearly excelled that classic moment in Chelsea at Nine last year when the composer Hans May had to appear startled by the materialisation of the Luton Girls Choir, as if they had sud- denly been smuggled into the Chelsea Palace to sing one of his songs. Mr. Payne's show is on the BBC; but then he could.never get away with quite so many plugs on the other network.