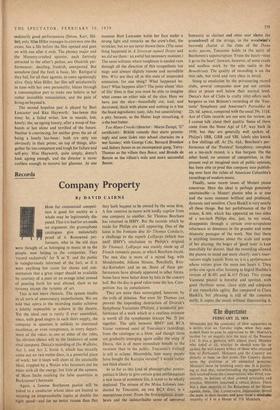 CAIRNS By DAVID How far commercial competi- tion is good for society as a whole may be legitimately dis- puted.That it is bad for art needs no argument; the gramophone catalogues give melancholy f proof of it. Renowned per- formers, who in the old days were thought of as belonging to music or to the people, now belong to the companies. They `record exclusively' for X or Y, and the public is vaingloriously informed of the fact, as if it were anything but cause for shame and con- sternation that a great singer should be available by courtesy of a puce or an orange label instead of pouring forth his soul abroad, slave to no tyranny except the tyranny of art.

This is not mere rhetoric. The system results in all sorts of unnecessary imperfections. We are told that opera in the recording studio achieves a fidelity impossible to achieve in the theatre. Yet the ideal cast is rarely if ever assembled, since, with good singers in such short supply, the company in question is unlikely to command excellence, or even competence, in every depart- ment of the voice; in one or other of the roles, the obvious choice will be the feudatory of some rival company. Decca's recording of Die Walkiire, Act 3, and Act 2, Scene 4, which has recently come out on two.stereo discs, is a powerful piece of work; but it stopi well .short of the attainable ideal, crippled by a Wotan who hammers out his notes with all the energy, but little of the aptness, of Hans Sachs marking the false quantities, in Beckmesser's Serenade.

Again, a famous Beethoven pianist will be yoked to a conductor whose ideas are limited to securing an irreproachable legato at double the right speed—and for no better reason than that they both happen to be owned by the same firm. A few contrive to move with lordly caprice from one company to another. Sir Thomas Beecham has returned to HMV. But the records which he made for Philips are still appearing. One of the latest is the Fontana disc Sir Thomas Conducts, a challenge to the superb Lollipops (which was itself HMV's retaliation to Philips's original Sir Thomas). Lollipops was mainly made up of French romantic pieces, in which Beecham excels. The new disc is more of a mixed bag, with Mendelssohn, Johann Strauss, Ponchietli, Rim- sky-Korsakov and so on. Some of these per- formances have already appeared in other forms. Some have been better done by him in the concert hall. But the disc is good value none the less. Com- petition has its consolations.

They are more than outweighed, however, by the evils of deletion. Not even Sir Thomas can prevent the impending destruction of Dvorak's Symphonic Variations (Philips), a wonderful per- forrnance of a work which at a cautious estimate is worth all the symphonies (except No. 2) put together. The split between HMV and RCA Victor removed most of Toscanini's recordings from the catalogue at a blow, and though these. are gradually emerging again under the wing of Decca, this is of more immediate benefit to the reviewer than to the public. Toscanini's Falstaff is still in eclipse. Meanwhile, hnw many people have bought the Karajan version? I would rather not think about it.

In so far as this kind of phonographic power-. politics is likely to give certain great performances a new lease of economic life, it isj pot to be wholly deplored. The reissue of the Aii0a Solennis con-. ducted by Toscanini, on two RA discs', is a momentous event. From the first imphatic drum- beats and the indescribable sense of universal humanity as clarinet and oboe soar above the groundswell of the strings, to the woodwind's heavenly chatter at the close of the Dona nobis pacem, Toscanini holds to the spirit of Beethoven's superscription 'From the heart—may it go to the heart' (beware, however, of some crude and soulless work by the solo violin in the Benedictus). The quality of recording is on the thin side, but vivid and very clear in detail.

Stung to emulation by the privateering record clubs, several companies now put out certain discs at prices well below their normal level. Decca's Ace of Clubs (a crafty title) offers such bargains as van Beinum's recording of the 'Fan- tastic' Symphony and Ansermet's Petrushka at 22s. 6d. apiece, compared with the usual 39s. Ilid. Ace of Clubs records are not sent for review, so I cannot talk about their quality. Some of them come from the Stone Age of LP, way back in 1950, but they are generally well spoken of. Philips's SBR, GBR and SBL labels also knock a few shillings off. At 25s. 4{d., Beecham's per- formance of the `Pastoral' Symphony, complete on a ten-inch record, is a fine bargain. On the other hand, no amount of competition, in the present real or imagined state of public opinion, has been able to prod this company into publish- ing over here the riches of American Columbia's recordings of modern music.

Finally, some recent issues of Mozart piano concertos. Here the ideal is perhaps genuinely unattainable—a Mozart pianist who is at one and the same moment brilliant and profound, dynamic and sensitive. Clara Haskil is very nearly all these things. But her performance of the D minor, K.466, which has appeared on two sides of a ten-inch Philips disc, just, to my mind, disappoints through a certain over-scrupulous reluctance to dominate in the grander and more dramatic passages of the work. Not that there is anything timorous about the scale and scope of her playing; the, bogey of 'good taste' is kept mercifully far distant. Had the recording allowed the pianist to stand out more clearly, one's reser- vations might .vanish. Even so, it is a performance whose virtues grow the more one hears it. They strike one again after listening to Ingrid Haebler's version of K.491 and K.415 (Vox). This young Viennese pianist is forceful and spirited, with good rhythmic sense, clean style and adequate if not remarkable agility. But compared to Clara Haskil's, her phrasing is still of the common earth; it copies the music without illuminating it.