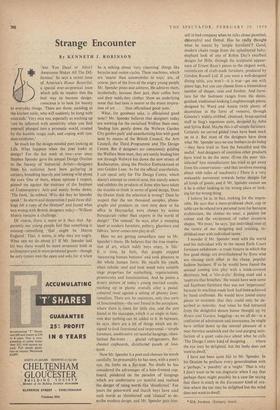 By KENNETH J. ROBINSON So much for the design-minded poet looking at Life. What happens when the poet looks at design? For the last week or, two—ever since Stephen Spender gave the annual Design Oration to the Society of ' Industrial Artists—designers from his audience have been gathering in corners, breathing heavily and lobking wild about the eyes. One of them, whose opinion I respect, pinned me against the staircase of the Institute of Contemporary Arts and nearly broke down. 'The fools,' lie sobbed. 'Why did they let Spender speak !' In alarm and desperation I paid three shil- lings for a copy of the Oration* and found what was wrong.with British designers today—'William Morris remains a challenge.'

Of course, there is more to it than that. Ap-, parently our young people feel that, something is missing—something 'that might be Merric England.' That. it seems, is why they' are angry. What can we do, about it? If Mr. Spender had his way • there would be more ornament both in architecture and in mass-produced goods—though, he only comes into the open and asks for it when he is talking about 'very charming' things like bicycles and motor-cycles. These machines, which are 'nearer than automobiles to toys,' are, of course, part of the lives of the angry young people Mr. Spender pities and admires. He admires them, incidentally, because their jazz, their coffee bars and their teddy-boy clothes 'show an underlying sense that bad taste is nearer to the truest inspira- tion of art . . . than officialised good taste.'

What, for goodness sake,• is officialised good taste? Mr. Spender believes that designers today are working for the socialised Welfare State man, 'leading him gently down the Welwyn Garden City garden path' and anwsthetising him with good taste by means of the British Council, the Arts Council, the Third Programme and The Design Centre. But if designers are consciously guiding the Welfare State man, they are surely leading him not through Welwyn but down the new streets of Roehampton, along the Pimlico Embankment or into Golden Lane. As for the official anaesthetists, 1 can speak only for The Design Centre, which doesn't attempt to control taste, but merely selects and exhibits the products of firms who have taken the trouble to think in terms of good design. Does the Orator think the selection is wrong? Does he suspect that the ten thousand samples, photo- graphs and products on view, next door to his office in Haymarket were chosen by sexless bureaucrats rather than experts in the world of design? 'The sensual,' he says, after a sweeping sneer at modern furniture, pottery, glassware and fabrics, 'never comes into play at all.'

Here we are getting somewhere near to Mr. Spender's thesis. He believes that the true inspira- tion of art, which teddy boys enjoy, is 'life.'

It is time, he feels, that people stopped `measuring human bottoms' and took pleasure in the whole human form. He recalls his youth, when tubular steel and bent wood were suitable stage properties for sunbathing, vegetarianism, promiscuity and functionalism. And he paints a dreary picture of today's young married couple, washing up in plastic overalls after a pastel- coloured meal against a setting of phoney func- tionalism. There are, he maintains, only two sorts of functionalism—the sort found in the aeroplane, where there is room for little else, and the sort found in the saucepan, which is so single in func- tion that nothing can be added to it. In between, he says, there are a lot of things which are de- signed to look functional and impersonal----`simple furniture, unobtrusive yet tasteful hangings, clean- • limbed flat-irons . . . glacial refrigerators, flat- chested cupboards, disinfected panels of lino- leum . .

Now Mr. Spender is a poet and chooses his words carefully. ,So presumably he has seen, with a poet's eye, the limbs on a flat-iron. No doubt he has considered the advantages of a bow-fronted cup- board, pondered on the paradox of hangings which are unobtrusive yet tasteful and realised the danger of using, words like 'disinfected.' For years the pokerwork and thatch boys have used such words as 'disinfected' and 'clinical' to de- scribe modern design, and Mr. Spender puts him- self in bad company when he talks about panethol, chlorophyl and Dettol. Has he really thought what he means by 'simple furniture'? Good, modern chairs range from the upholstered baby- elephant look of one of Robin Day's excellent designs for Hille, through the sculptural appear- ance of Ernest Race's pieces to the elegant work, reminiscent of craft-made furniture, produced by Gordon Russell Ltd: If you want a well-designed dining table, you won't—it is true—get one with piano legs, but you can choose from a tremendous number of shapes, sizes and finishes. And furni- ture for the bedroom ranges from the distin- guished, traditional-looking Loughborough pieces, designed by Ward and Austin (with plenty of decoration in the form of veneers), through Gomme's widely-cribbed, ebonised, brass-spatted stuff to Stag's ingenious units, designed by John and Sylvia Reid. Maybe this is all simple furniture. Certainly no carved gilded roses have been stuck on to it. But most of the designers have done what Mr. Spender says no one bothers to do today —they have tried to 'fuse the beautiful and the useful.' And designers of countless other products have tried to do the same. (Even the poor 'dis- infected' lino manufacturer has tried to get away from his conservatism—and that involves messing about with miles of machinery.) There is a very noticeable movement towards better designs for all kinds of goods, and if Mr. Spender cannot see it he is either looking in the wrong place or look- ing for the wrong thing.

I believe he is, in fact, looking for the impos- sible. He says that a mass-produced chair, cup or table can be related to a personal taste for baroque architecture, the clothes we wear, a passion for colour and the excitement of rather eccentric shapes. 'We must,' he says, 'put individual man at the centre of our designing and creating, in- dividual man with individual tastes,' I wonder if Mr. Spender went with the world and his individual wife to the recent Earls Court furniture exhibition—a trade bizarre in which the few good things are overshadowed by firms who are chasing each other in the cheap, popular fashion business. If so he would have found the sensual coming into play with a mink-covered electronic bed, a `tete-a-tete' flirting stool and a `mattress that breathes.' He would have seen some sad Jacobean furniture that was not 'impersonal' because its machine-made look had been achieved by hand craftsmen. He would have found many pieces so eccentric that they could only be de- scribed as neurotic. And when he had retreated from the delightful dream house thought up by House and Garden, boggling—as we all do—in a confusion of admiration and annoyance, he might have settled down to the sensual pleasure of a near-formica sandwich and the soul-purging satis- faction of a quiet volte-face about what he calls 'The Design Centre kind of designing . . . where the eye may be delighted. but the body does not want to dwell.'

I have not been quite fair to Mr. Spender. In his Oration he prefaces every generalisation with a 'perhaps,' a 'possibly' or a 'might.' That is why I don't want to be too dogmatic when I say that perhaps there might possibly be a case for saying that there is much in the Encounter kind of ora- tion where the ear may be delighted but the mind does not want to dwell.